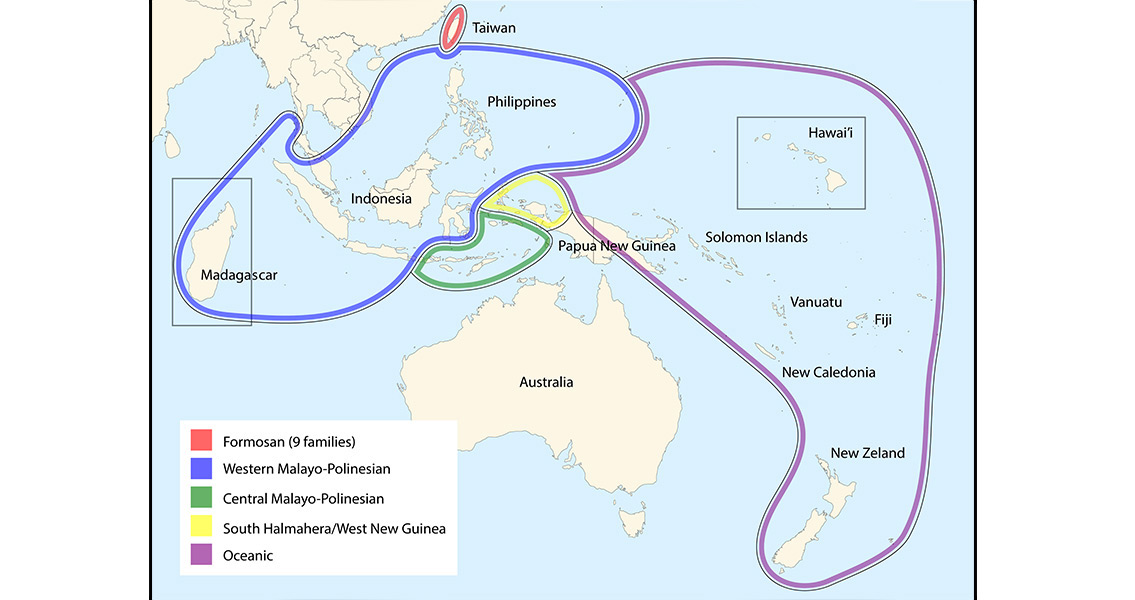 Human Genetics, has carried out the most extensive DNA analysis of the region so far to propose a new solution as to how the language family spread across such a large and diverse population. There are two main interpretations of the prehistory of Island Southeast Asia. The first proposes a massive expansion of Neolithic Austronesian speakers out of Taiwan during the fourth millennium BCE, coming shortly after Neolithic settlers had introduced grain agriculture, pottery and domesticated animals to the island. Material evidence dating back as far back as 3500 BCE can be found in the northern Philippines of populations bearing a close cultural resemblance to those in Taiwan, and within a millennium similar material traces started to appear in Indonesia. The second interpretation, and one which authors of the new study have played a key role in forming since the 1990s, argues that rather than a massive migration out of Taiwan, climate change shaped genetic patterns in the region. Global warming at the end of the last glacial period saw massive sea level rises which isolated sections of Island South East Asia. Although explaining the diversity of the region, critics argue it fails to account for the strong evidence suggesting the Austronesian languages have their origins in Taiwan. Detailed analysis of genetic data, including 12,000 mitochondrial sequences, in the new study led by Dr. Pedro A. Soares of the University of Minho in Portugal, suggests a much more complicated series of events; one which manages to reconcile both interpretations. The results of the genetic analysis showed the mitochondrial DNA found in Pacific Islanders had been present in Island South East Asia much earlier than 4000 BCE, casting serious doubts on the ‘Out of Taiwan’ theory. Soares et al argue that landscape and sea level changes 11,500 years ago lead to a significant expansion from Indonesia 8,000 years ago. It was this expansion which led to the team’s discovery that populations throughout Southeast Asia and the Pacific Islands shared the same DNA and Y-chromosomes. Suggesting a common ancestry for Taiwan and Island South East Asia populations was established before the Neolithic period, the team’s results also point to subsequent minor waves of migration which may have lead to the Austronesian language dispersal. These subsequent migrations could be crucial in providing an explanation for the spread of the Austronesian language family within the climate change model. “We infer a primarily common ancestry for Taiwan/ISEA populations established before the Neolithic, but also detected clear signals of two minor Late Holocene migrations, probably representing Neolithic input from both Mainland Southeast Asia and South China, via Taiwan”, the team write in the study, “This latter (migration) may therefore have mediated the Austronesian language dispersal, implying small-scale migration and language shift rather than large-scale expansion.” The study suggests that the Taiwanese migrants in one of the minor migrations spread the Austronesian languages through ISEA. “Our analysis supports a scenario in which language shift played the major role, rather than large-scale population replacement”, the authors write in the study. In a recent interview with The University of Huddersfield, Professor Martin Richards, one of the study authors, suggested that the Taiwanese migrants may have constituted an elite group, perhaps associated with a new religion or philosophy, which provided a vehicle for their language to spread throughout the region. For more information: www.link.springer.com Image courtesy of Wikimedia Commons user: Stefano Coretta]]>