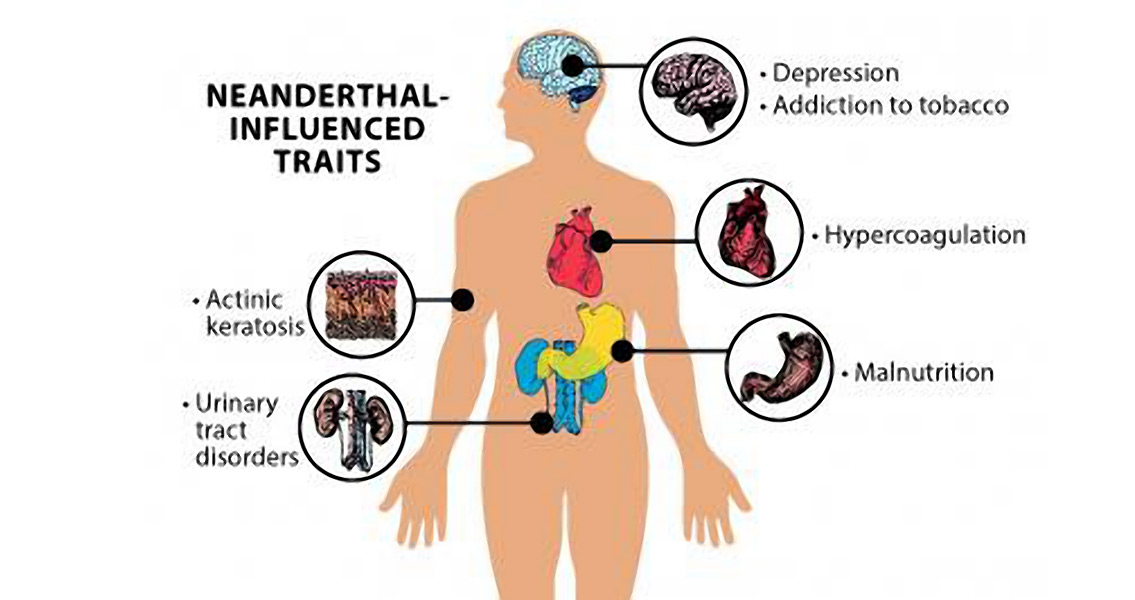 Science, the new study from scientists at Vanderbilt University is the first to actually compare Neanderthal DNA in a significant population of adults from European ancestry with their medical records. Just a few weeks ago, a study claimed that Neanderthal DNA could be responsible for allergies in humans, while previous research has suggested anything from skin colour to our fat metabolism could have been affected by Neanderthal DNA. Led by Professor John Capra from Vanderbilt University, the new study confirms that Neanderthal DNA influences a surprisingly diverse range of clinical traits in modern humans. “Our main finding is that Neanderthal DNA does influence clinical traits in modern humans: We discovered associations between Neanderthal DNA and a wide range of traits, including immunological, dermatological, neurological, psychiatric and reproductive diseases”, Capra explained. A surprising number of Neanderthal snippets are associated with neurological and psychiatric effects, according to the new study. “The brain is incredibly complex, so it’s reasonable to expect that introducing changes from a different evolutionary path might have negative consequences.” explained Corinne Simonti, a doctoral student from Vanderbilt University and the the paper’s first author. Aspects of Neanderthal DNA which modern humans retained to their advantage 40,000 years ago could be proving deadly now. One Neanderthal DNA variant is responsible for rapid blood coagulation in modern humans, something which seals wounds quickly and prevents infection – a crucial trait in hostile, perilous prehistoric environments. In modern societies however, this trait has become detrimental, with hypercoagulation increasing the risk of stroke, pulmonary embolism and complications during pregnancy. The team obtained their results by taking advantage of the Electronic Medical Records and Genomics Network funded by the National Human Genome Research Institute, a database which links the biological samples of 28,000 patients with their health records. After identifying individuals who suffered from specific medical conditions, such as heart disease or depression, the team determined the unique set of Neanderthal DNA those individuals carried. By comparing the two sets of data the team could identify whether each piece of Neanderthal DNA influenced the risks found in the medical records. The techniques developed by the team have the potential to open up new avenues to study the effects of different key events on human evolution. “Vanderbilt’s BioVU and the network of similar databanks from hospitals across the country were built to enable discoveries about the genetic basis of disease”, explained Prof. Capra “We realized that we could use them to answer important questions about human evolution.” Capra and his team are now looking into studying other data held in the medical records, beyond just physical traits, to gain an even wider understanding of the effects of Neanderthal DNA. For more information: www.science.sciencemag.org Image courtesy of Deborah Brewington, Vanderbilt University]]>