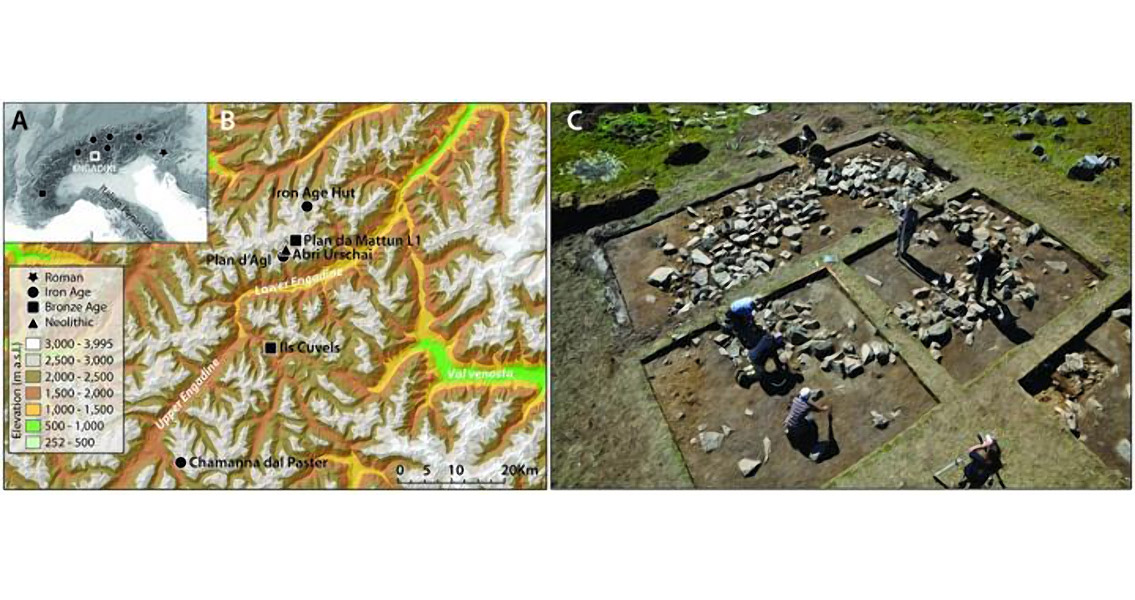 PLOS ONE, the authors suggest that these Iron Age pot sherds could have been used in dairying, for example as vessels for heating milk. The results were obtained by carrying out organic residue analysis on the artefacts. If correct, Carrer and colleagues’ research suggests that dairying in the high Alps started much earlier than is traditionally believed. An important economic and cultural tradition, dairy farming in the region is also incredibly complicated. Even today it is a high risk endeavor due to the marginal environment there. The recent history of high alpine dairying is well documented, but the origins of the practice are far more obscure. This is the result of high altitude archaeological sites suffering poor preservation, as well as the generally ephemeral nature of trans-humanistic societies. Previously, archaeologists have postulated that 3000 year old stone structures at several locations in the mountain range mark the point in history when seasonal occupation of the high Alps intensified and new, more elaborate economic strategies were implemented. Carrer’s team took pottery remnants from three of these Iron Age stone structures, as well as several older prehistoric rock shelters, to try and establish when dairy farming started. Through isotope analysis the team discovered dairy lipids on artefacts from each of the Iron Age structures, but none on those from the prehistoric rock shelters. Archaeologists have already established that milk production, at least in lowland settings, started in Europe during the early Neolithic period when cattle and sheep were first domesticated. From this basis however, it has proven much more difficult to glean any additional information on the intensity, geographic distribution and nature of prehistoric dairy farming. It is widely argued that reliance on fermented dairy products such as cheese didn’t come until the Bronze Age, after the adaptation which allowed humans to digest lactose had finally arrived in Europe. The authors of the study believe that high alpine dairy farming provides a unique case study of a nutritious resource being traded as part of the socioeconomic development of a region. “This study showed that its (high alpine dairying) origin can be traced back to prehistory, and that it is deeply related to the socio-economic development of alpine communities and to the transformation of upland landscapes.” they write in the study. High alpine dairying relies on a sophisticated form of landscape management, dependent on in depth local environmental knowledge. By tracing its history, Carrer and colleagues have shown just how resilient the practice is – a successful, long term means of food production. For more information: www.plos.org Image courtesy of Carrer F, et al. PLOS ONE]]>