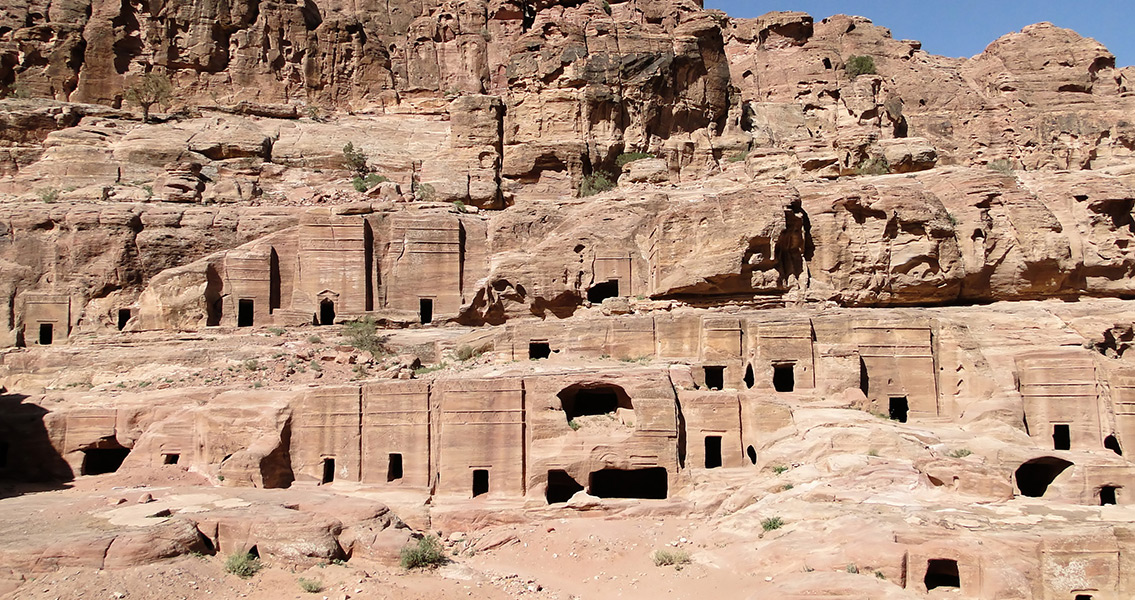 Huge Discovery in the Shadows of Petra

Dawn. Archaeologists throughout the years have been aware that something was there, but most assumed the structure was part of the city’s terrace walls. Tuttle collaborated with Sarah Parcak on the research. Parcak, who is with the University of Alabama at Birmingham, uses satellites to survey a variety of sites. The research team took subsequent excursions to examine and measure the site on the ground. It was during this trip that they unearthed the scattered pottery, which indicates the site could date back to the time Petra was founded. Petra was constructed by the Nabateans in around 150 BCE, when the civilization was accumulating great wealth through trading with the Greeks and Persians. Eventually, the city was absorbed by the Ottoman, Byzantine and Roman empires but its ruins remain famous for the work completed by the city founders, including spectacularly carved facades in the canyons and on the cliffs. It was abandoned sometime around the seventh century, and rediscovered in 1812 by Johann Burckhardt, a Swiss explorer. In addition to the Nabatean pottery, the researchers found fragments of pottery which had been imported from the Hellenistic groups who often traded with Petra, as well as pottery from the Byzantine and Roman eras. In the mountains, canyons and valleys that surround Petra, there are numerous small cultic shrines and various platforms, but nothing matching the scale of the recently discovered platform. It’s believed these sites, along with a big, open plateau called the Monastery, were used for political activities or cultural displays and this newly found platform may have served the same purpose. The giant staircase doesn’t face the city center, meaning it doesn’t have any apparent relationship to Petra, unlike the others, which the researchers see as peculiar. Because the builders didn’t leave any written records it’s difficult to fully understand the purpose of the platforms. Similar to other Semitic cultures at the time, the Nabateans often used an iconic style which indirectly represented their divinities, such as stelae, niches and carved blocks. Sometimes even an empty niche can represent a god. Due to the ongoing trade with other Mediterranean cultures however, the Nabateans also adopted figures as representations as well, with gods that aligned with Zeus and Aphrodite. The work has been published in the Bulletin of the American Schools of Oriental Research, and although there are no current excavations plans at the site, they’re hopeful they will be able to continue their work in the future. ]]>