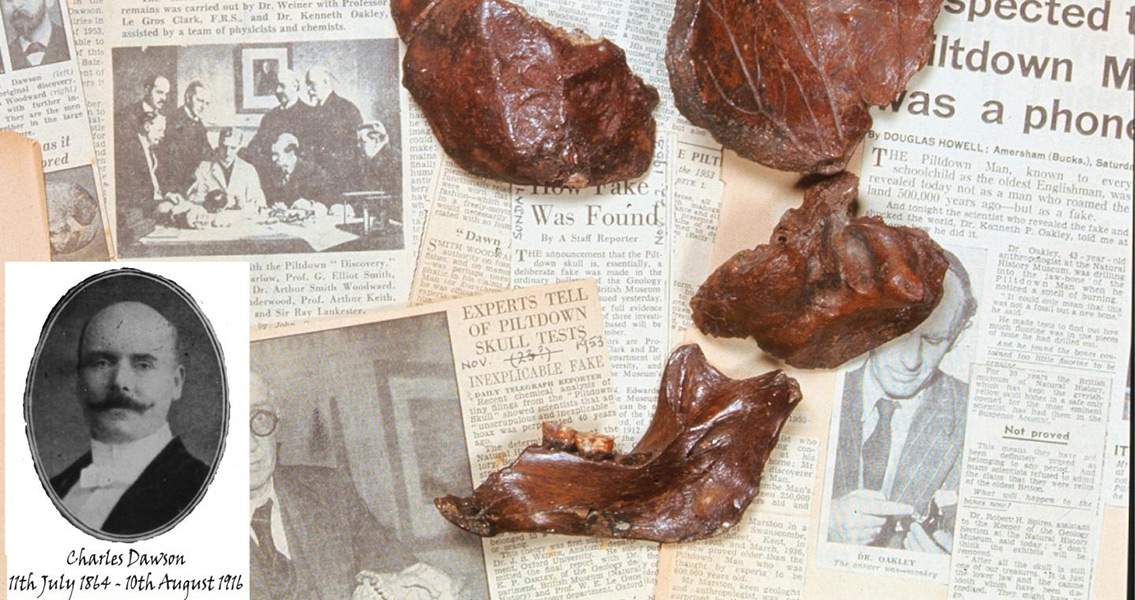 Homo erectus. Scientists around the world accepted the fossil’s validity and the shocking implication that the British Isles had played a much more prominent role in the evolution of modern humans than anyone previously imagined. For forty years the fossils misdirected the study of anthropology, as scientists struggled to interpret them. The results suggested a species with an ape like jaw, but the cranium of a modern human. Chemical tests eventually revealed the hoax, showing that the bones had been deliberately stained to make them seem much more ancient. Now, a new study of the forgeries argues that it was carried out by a lone perpetrator. The results, published in the journal Royal Society Open Science, show that the fraudulent fossils were created from a limited number of specimens that were all constructed using the same techniques. A host of people have been accused of involvement in the hoax, most famously Sir Arthur Conan Doyle, the creator of Sherlock Holmes. Suspicion fell on the writer because he was a fossil collector who lived close to Piltdown Common. In his 1912 novel: The Lost World, Conan Doyle mused about how easy it would be able to create a fake fossil, and the consequences of such a forgery. For many, this was seen as a hint to the Piltdown Man Hoax. According to the authors of the new study however, Arthur Conan Doyle can be cleared of any involvement in the hoax; responsibility likely resting on only one pair of shoulders. “Although multiple individuals have been accused of producing the fake fossils, our analyses to understand the modus operandi show consistency between all the different specimens and on both sites. It is clear from our analysis that this work was likely all carried out by one forger: Charles Dawson”, said Dr Isabelle De Groote from Liverpool John Moores University, the lead author on the paper. The research was undertaken by a multidisciplinary team from institutions in London, Cambridge, Liverpool and Canterbury. Their aim was to uncover exactly how a forgery that fooled the world for four decades was pulled off. DNA analyses revealed that several of the teeth found at each site likely came from the same orangutan. The shape of the molar from the second Piltdown site suggests it was almost certainly from the other side of the jawbone discovered at the site of the initial Piltdown Man discovery. Many of the bones and teeth were filled with Piltdown gravel, to aid the deception. Dental putty was used to fill in holes in the skulls, as well as to reset teeth in the jaw and reconstruct one of the teeth, which may have been broken while being ground down. Although the hoax took place over a century ago, the authors of the study point out that it carries important lessons for today. “Even today, over a hundred years after the Piltdown fraud was perpetrated, it remains relevant because of the huge impact it had on the course of Palaeoanthropological research at the beginning of the twentieth century.” explained Dr Laura Buck, co-author of the paper from the Division of Biological Anthropology, University of Cambridge. “Fossil human remains from Africa, such as the Taung child from South Africa, were largely ignored when first found because they didn’t fit with preconceptions of what an early human relative would look like, based on Piltdown Man. This serves as an important reminder to researchers today to study what is there and not what we think should be there,” Buck continued. The Piltdown Man forgeries themselves are kept at the Natural History Museum in London. Image courtesy of Natural History Museum]]>