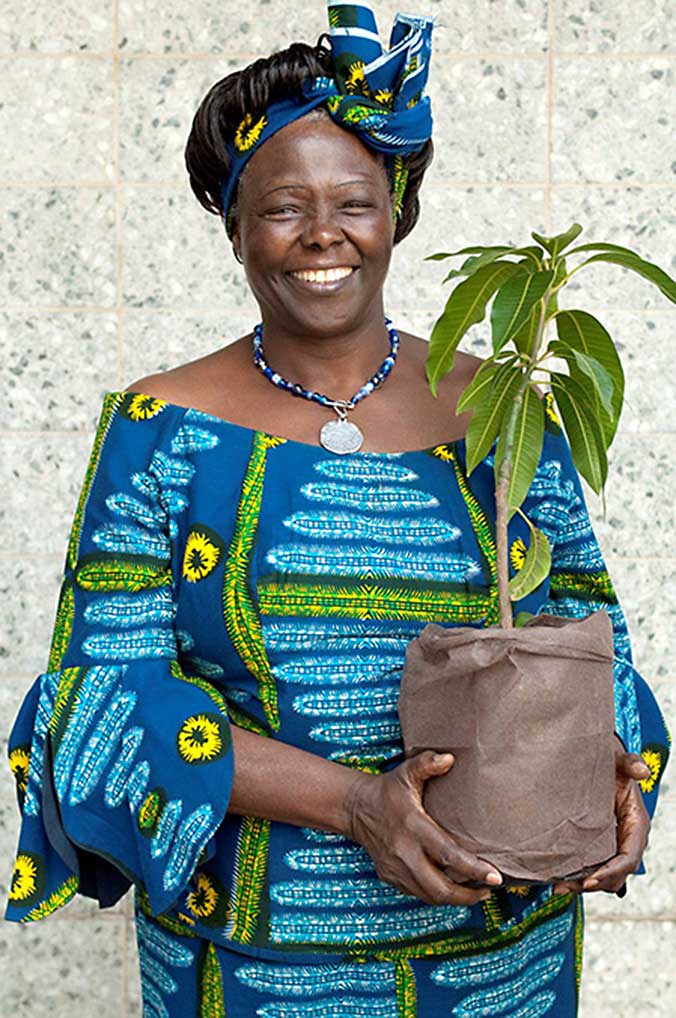 A Changing Culture Miriam Wangari, later Wangari Maathai, was born on April 1940 into a country undergoing deep cultural change. When the colonial powers divided up their spheres of influence in 1885, the newly designated country of Kenya, which incorporated parts of the ancestral lands of many different ethnic groups, was assigned to Britain. The British established station posts there, initially promising some tribal groups that their lands and possessions would not be taken over. Those promises weren’t kept. Some groups cooperated with the British; others resisted and were violently put down. Britain sent missionaries who taught literacy to those who converted to Christianity (in the Kikuyu language converts were called “athomi,” literally “people who read.”) It also sent colonists who took possession of much of the best agricultural land, while black Kenyans were moved onto “native reserves.” When the colonial government introduced taxes that had to be paid in British currency, men from the native reserves had to leave their families for months at a time and work for white families in order to obtain money. Wangari was born to a Christian family of the Kikuyu tribe on the native reserve of Ihithe. The land there was fertile and well forested, and rain, food and firewood were abundant. Wangari helped with farming and food and wood gathering from a very early age; she was told that fig trees must never be cut for firewood or otherwise disturbed, because those were the trees of God. (This was a traditional Kenyan teaching, not one brought by the missionaries.)

Wangari’s oldest brother urged her parents to send her to the British Presbyterian school when she was eight, and they agreed. She excelled there, and at age eleven she went on to a Catholic boarding school. Later on Wangari praised the education she received and the dedication of the nuns, commented matter-of-factly on the weevil-infested food and the constant work and schoolwork which allowed very little free time, and lamented the fact that children were punished for speaking in their native languages rather than English of Kiswahili. But at the time it seems she was uncritically grateful. She converted to Catholicism, changed her name to Mary Josephine Wangari, and joined a Catholic volunteer organization. Wangari was still in school when the Mau Mau uprising erupted in the early 1950s. As an adult Wangari described the uprising as the result of ongoing theft of land from black Kenyans; as a teenager she believed the nuns who told her that the Mau Mau were terrorists and urged her to pray for their defeat. Her father also took the British side, and her brothers were conscripted into the Home Guard. Despite this, Wangari was arrested by the British as she traveled to visit family friends on a school holiday. She spent two days in a crowded, dirty prison camp on very scanty rations; then she was identified as her father’s daughter and released. It was her first, but not her last, experience of imprisonment. Many thousands of black Kenyans died in prison camps during that war. The British prevailed militarily but realized that their occupation was growing unsustainable. In 1957 black Kenyans were given the right to vote; in 1959, when Wangari was nineteen, negotiations for Kenyan independence began. Both sides saw a need for more Kenyans to complete higher education so they could take over posts vacated by the British. Wangari, who had just graduated at the top of her class, was one of six hundred Kenyans awarded airfare and scholarships to attend universities in the United States.

Wangari attended a Catholic college in Kentucky, where she majored in biology and minored in chemistry and German. She was startled to find that the US, the reputed “land of the free,” still enforced racial segregation, and she watched the struggle for civil rights with fascination, seeing parallels to her own country. During the summer she assisted a black technician at a hospital, and he urged her to attend a meeting of the Nation of Islam. Wangari was shocked by their assertion that Jesus was black, argued with them, and indignantly confronted the technician afterward. He asked her, “Why do you think everything you’ve been taught is true?” The question took root in her mind. Around this time she changed her name from Mary Jo Wangari—her English baptismal name and African given name—to Wangari Muta, reclaiming her father’s last name as her own. Wangari completed her master’s degree in 1966, three years after Kenya gained independence. She accepted a job as a research assistant at the University of Nairobi and flew home, eager to help shape her country’s free future. Riding home from the airport, she listened to President Kenyatta urging Kenyans to reclaim their land and their future and thought of words she’d heard in the US from Martin Luther King: “Free at last!” But it wasn’t quite that simple. Upon arrival, she learned that the job promised to her had been given to somebody else, a man of the same ethnic group as the professor she had expected to assist. Instead she found work in the university’s school of veterinary medicine. After a year she traveled to Germany to get her doctorate. Returning home in 1969, she married Mwangi Mathai, helped him run for Parliament (he lost), and kept up her doctoral studies. In 1971 she became the first woman in East Africa to receive a doctorate. The university promoted her to senior lecturer but still denied her pension benefits and a housing allowance because she was a married woman. Wangari protested and filed a court case. Since the university’s chancellor was none other than President Kenyatta, the case was promptly dismissed, but Wangari’s persistence finally got the university to declare her an honorary male professor with full benefits.

The Root of the Problem

In the early 1970s Kenya was East Africa’s largest livestock producer, but there were concerns about poor herd health. Wangari set out to study a tick-borne disease. As she collected samples she noticed thin cattle, poor pastures, and shallow, silty rivers. She decided that the main problem for cattle was not parasitism but environmental degradation. Wangari went back to Ihithe, which she remembered as a clean and fertile place. The fig trees were no longer regarded as ‘trees of God’—that was seen as backward thinking—and many had been felled. Wangari knew that the fig trees’ deep root systems had held soil together and split rock so that streams could rise. In the absence of the trees, the streams were shallower and dirtier, the hillsides more eroded,and the soil poorer. Other native trees had been cut en masse and replaced by faster-growing imported timber trees or tea and coffee plantations. Returning to Nairobi, and to meetings of the National Council of Women of Kenya, Wangari heard of other changes for the worse. Cash-crop plantings had replaced subsistence farms in many places, and there more children suffered from sicknesses related to malnutrition as families relied on purchased refined foods that lacked necessary vitamins and proteins.

Wangari decided that tree planting would solve several problems at one. The root systems would hold soil, reduce erosion and protect waterways; the trees could also clean waterways as well as providing shade for cattle, fruit for human consumption, firewood and fence posts. First she started a small business hiring low-income women to do tree-based landscaping for richer people and also to start tree nurseries. She wasn’t able to make the business pay, but other NGO members agreed with the need for tree planting. In 1977 Wangari and other women from the Council celebrated World Environment Day with public tree plantings. Soon afterward they were invited to do a large-scale tree planting on a farm owned by a women’s collective. As those stories were publicized, women from other parts of the country reached out to Wangari to ask about starting their own planting projects. First she thought that foresters in their areas could help them, but many foresters refused, saying that forestry should be left to professionals. Wangari disagreed. “You don’t need a diploma to plant trees,” she said. She reminded the women that most of them were used to farming, and they could learn tree-growing too. She provided tree seedlings, until her supply was soon exhausted. The government forest service offered to supply seedlings and then backed out as requests poured in.

Wangari urged women to collect their own seed from local native trees, paid them for every seedling they raised and successfully transplanted, and encouraged successful tree-growers to tell women in nearby villages about their successes and failures. Soon tree nurseries and ‘green belts’ of trees planted by local women were spreading throughout Kenya, offering the ecological benefits Wangari had hoped for, offering empowerment for women and poor people… and also leading to challenges Wangari had not foreseen. We’ll look at those challenges in part 2.]]>
Share 0
Tweet
Share
Share
Share