BREAKING NEWS
GMT+2 08:02
Home News What was the Berlin Conference? 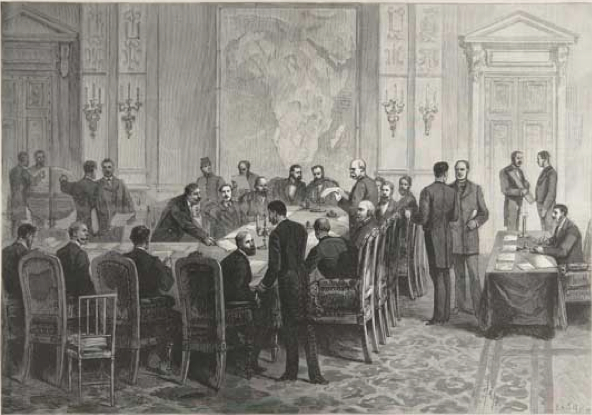 What was the Berlin Conference?

thcentury. At the end of the 18thcentury, European explorers started mapping out the interior of Africa and by 1850, most of the African continent had been discovered by European explorations.   This newly discovered land, however, led to increased tensions between European states that were already competing for colonial dominance. In 1884, at the request of Portugal, Germany’s first chancellor Otto von Bismarck organized a conference for all the major western powers to negotiate the issue of control over Africa.   This event became known as the Berlin Conference of 1884-1885 (aka the Congo Conference or the West Africa Conference). Not only was this a turning point in the history of Africa, it was also the establishment of Germany as a colonial power.

At the time, 80% of the African continent remained independent and indigenous people were treated as trading partners. But over time, due to various factors, such as diplomatic maneuvers, colonial explorations, and the discovery of numerous valuable resources (i.e. gold, timber, rubber, etc.), interest in the continent increased dramatically.   The Berlin Conference aimed to end the competition between European powers during the “Scramble for Africa”. The following fourteen countries were represented at the Conference: Austria-Hungary, Belgium, Denmark, France, Germany, Great Britain, Italy, the Netherlands, Portugal, Russia, Spain, Sweden-Norway (who were unified in 1814-1905), Turkey, and the USA.   The General Act covered several key points. For one, the Conference “resolved” the issue of slavery, as it contained a clause prohibiting the transatlantic slave trade. Furthermore, the Free State of Congo was established, which was one of the initial and key causes of the conflict. The 14 signatories were allowed to trade freely throughout the Congo Basin, and the Niger and Congo rivers were made free for ship traffic.   The Principle of Effectivity was established, which meant that European powers were not allowed to set up colonies in name only. Moreover, the act established regional boundaries for each colonial power, giving them an exclusive right to “pursue” the legal ownership of land in the eyes of the other European powers.   The conference sped up the process of colonization, and by 1914, the African continent was fully divided into fifty countries. Britain was the biggest “winner”, gaining control over Egypt, Sudan, Uganda, Kenya, South Africa, Zambia, Zimbabwe, and Botswana. Furthermore, they also controlled the Gold Coast with Nigeria and Ghana.   France came in second with control over most of western Africa, including the Ivory Coast, Benin, Mali, French Guinea, Mauritania, Niger, and Senegal. Other notable colonial powers were Belgium, that controlled the Democratic Republic of Congo, Portugal, Italy, Germany, and Spain.   The outcome was an ill-defined, rigid grid of borders that divided the continent into irregular territories. The new boundaries were superimposed over the existing borders, completely disregarding the pre-existing division of indigenous cultures. The consequences are still evident today, as it merged together disparate groups who were historically enemies, leading to numerous conflicts on the African continent.]]>