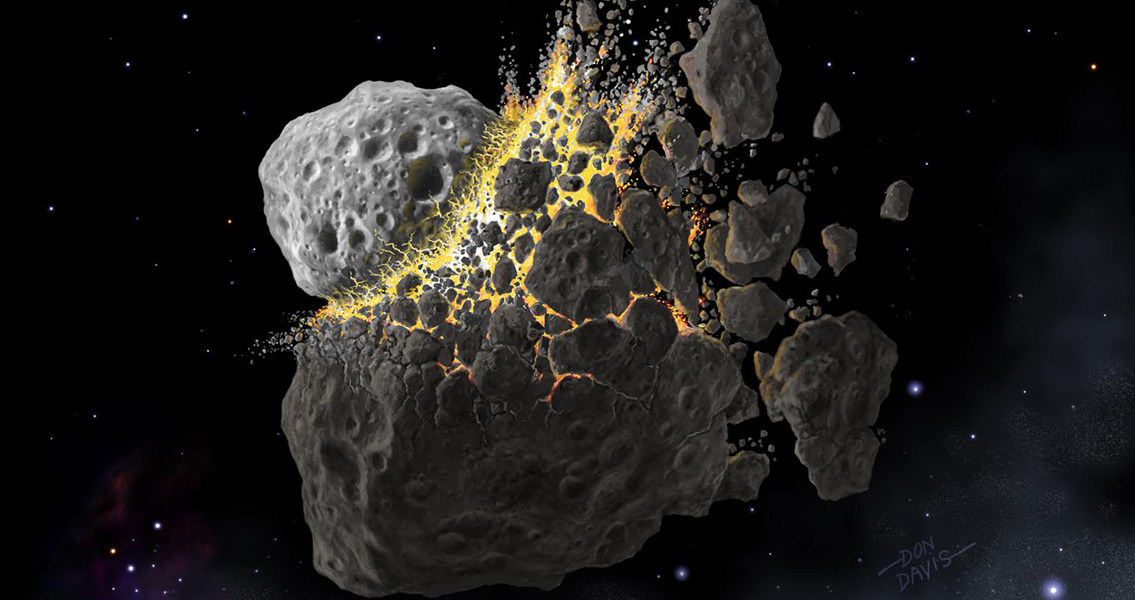 The Meteorites Currently Bombarding the Earth are Surprisingly Strange

Nature Astronomy, the new paper by lead author Philipp Heck of The Field Museum in Chicago marks the first “big picture look” at these meteorites from deep in the earth’s past. Four hundred and sixty-six million years ago, well before the time of the dinosaurs, there was a spectacular collision in outer space; an unknown object smashed into a massive asteroid and tore it apart, sending chucks of rock and debris falling towards the earth. Today, many millions of years later, it is still the fall out from this collision that is responsible for the majority of meteorites that fall to earth. Heck and his team decided to find out what kind of meteorites were falling to earth before the massive collision. They determined that the kinds of meteorites which bombarded the earth’s surface then are incredibly rare now. “We found that the meteorite flux, the variety of meteorites falling to Earth, was very, very different from what we see today.” explained Heck, in a press release from the Chicago Field Museum. “Looking at the kinds of meteorites that have fallen to Earth in the last hundred million years doesn’t give you a full picture,” explains Heck. “It would be like looking outside on a snowy winter day and concluding that every day is snowy, even though it’s not snowy in the summer.” Put simply, meteorites are pieces of rock that have fallen to earth from outer space (asteroids on the other hand, are pieces of rock still in space). They’re typically formed from the debris of cosmic collisions involving bodies such as moons, asteroids and planets. There are however, a huge number of different types of meteorites, reflecting the compositions of the different bodies involved in the collisions that created them. Analysing the composition of the different meteorites that fall to earth can give scientists valuable insight into the history of our solar system. “We knew almost nothing about the meteorite flux to Earth in geological deep time before this study,” said coauthor Birger Schmitz of Sweden’s Lund University. “The conventional view is that the solar system has been very stable over the past 500 million years. So it is quite surprising that the meteorite flux at 467 million years ago was so different from the present.” Heck’s Swedish and Russian colleagues excavated samples of rock from an ancient seafloor now exposed in a Russian river valley containing meteorites, and then dissolved the rocks in acid so that only microscopic chromite crystals remained. “Chrome-spinels, crystals that contain the mineral chromite, remain unchanged even after hundreds of millions of years,” said Heck. “Since they were unaltered by time, we could use these spinels to see what the original parent body that produced the micrometeorites was made of.” Chemical analysis showed that the meteorites and micrometeorites that fell over four hundred and sixty six million years ago were different to the ones that have fallen since. A full 34 percent of the pre-collision meteorites belong to a meteorite type called primitive achondrites; today, only 0.45 percent of the meteorites that land on Earth are of this type. William Bottke of the Southwest Research Institute, one of the contributors to the paper, said: “Meteorite delivery from the asteroid belt to the Earth is a little like observing landslides started at different times on a mountainside. Today, the rocks reaching the bottom of the mountain might be dominated by a few recent landslides. Going back in time, however, older landslides should be much more important. The same is true for asteroid breakup events; some younger ones dominate the current meteorite flux, while in the past older ones dominated.” Heck and his team now hope to expand their study, to explore different windows in time in order to learn more about the formation and interaction of different bodies in the solar system. Image courtesy of © Don Davis, Southwest Research Institute.]]>