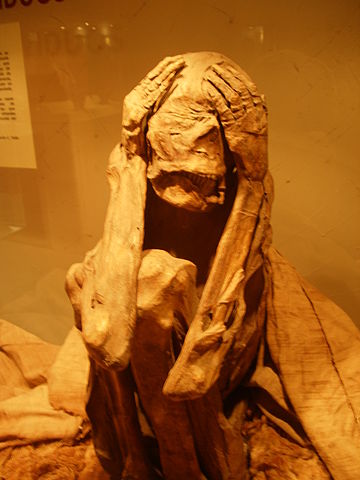 th Century. It was there that the team came across a startling discovery: a mummy from centuries before Inca settlement.

Pre-dating the Inca rule, the mummy was made by the Ychsma people, who were native in the region from the 10th Century, until they were conquered by the Incas five centuries later.

In his statement on behalf of the team, Professor Peter Eeckhout said: “The deceased is still wrapped in the enormous funeral bundle that served as a coffin.” “Discoveries like this one are exceptionally scarce, and this mummy is incredibly well preserved. Samples were collected for carbon-14 dating, but the area in which it was discovered, and the type of tomb, suggest this individual was buried between 1000 and 1200.”

This was just one of thousands of mummies discovered at the site. So far, 300 have been excavated by the team working on the Ychsma Project. However, most of them had suffered from various disturbances, such as looting. Prior to the arrival of the Inca at Pachacamac the site was looted by Spanish conquistadors. Much of it was left in complete disarray, but one funeral chamber was left intact. When Professor Eeckhout’s team discovered the mummy, it was in such good condition that it could be studied without the need to unwrap it.

Pilgrimage in the Inca Empire

After the arrival of the Incas, the site underwent a period of dramatic change. It was established as a large pilgrimage centre on Peru’s Pacific coast, where the worship of certain deities contributed to an empire-wide collective identity. It is assumed that worshippers were responsible for leaving a number of other objects found at the site, including Spondylus shells, which symbolise fertility. The research team also found an Inca monument for rituals, as well as a chapel for foreign pilgrims. Inside, they found offerings such as vases, and even some animals. A 17th Century description of the site from Spanish monk Antonio de la Calancha matches up with the findings. The results of the project confirm the role of Pachacamac as a site of pre-Columbian pilgrimage under the Inca Empire: ‘Deities and their worship played a major part in the life of Pre-Colombian societies,’ says Professor Eeckhout. ‘The Inca understood this very well, and integrated it into how they wielded their power. By promoting empire-wide worship, they contributed to creating a common sense of identity among the many different peoples that made up the empire. Pachacamac is one of the most striking examples of this.’

Future plans for the Ychsma mummy

Professor Eeckhout and his team now plan to use medical imaging techniques, including x-ray scans, axial tomography and 3D reconstruction, to contextualise and explore their discovery. They will be working in collaboration with Christophe Moulherat from the Musée du Quai Branly, Paris. By working out the position of the person inside, testing whether they had any diseases and analysing any offerings that may be buried with them, the team will be able to paint a more detailed picture of life for the Ychsma people.   Title image by Thomas Quine]]>
Share 0
Tweet
Share
Share
Share