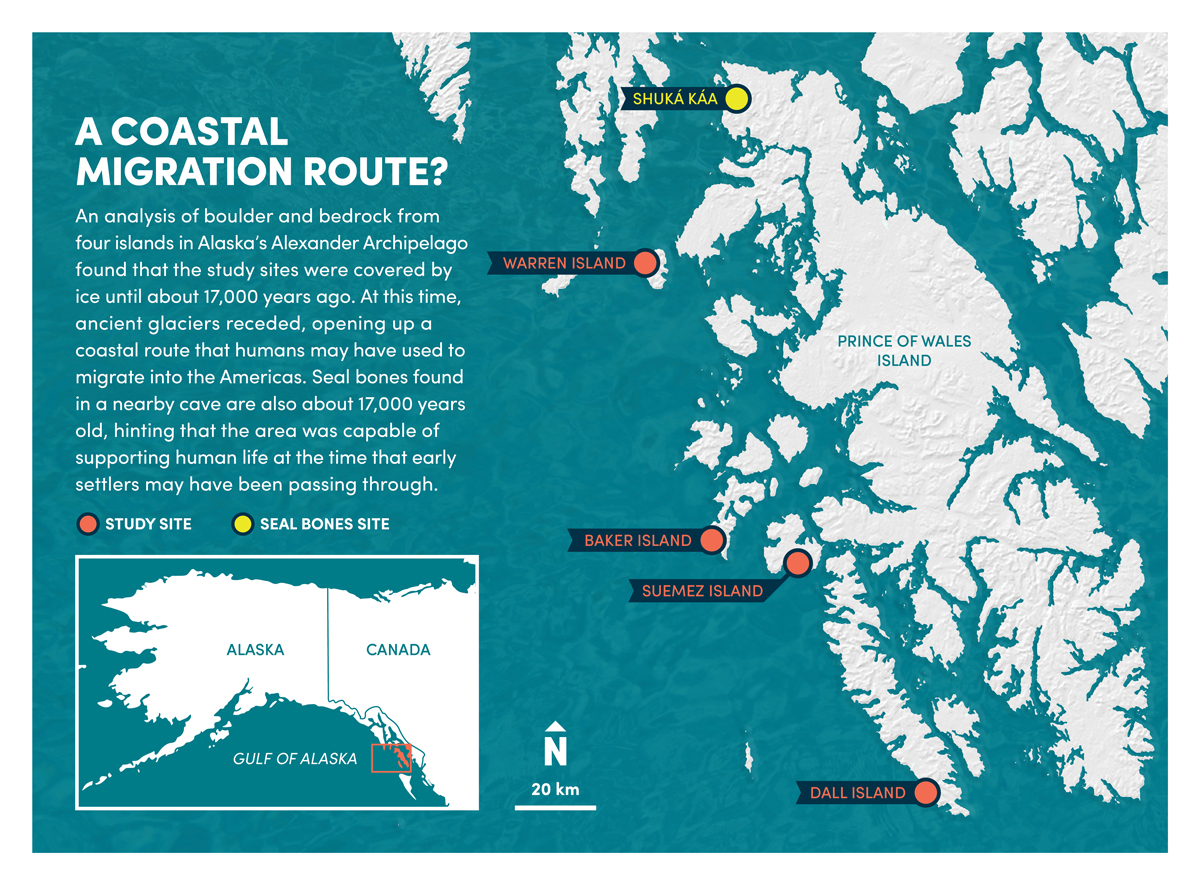 New research: How did the first people come to the Americas?

part of a coastal migration route appeared in Alaska around 17,000 years ago. At the same time, ancient glaciers began to recede, which exposed southern Alaskan islands to the potential for human migration. Supporting the hypothesis, recent genetic and archaeological findings show that settlers are likely to have begun travelling further into the Americas around 16,000 years ago; just 1,000 years after the coastal gateway became accessible. While the findings aren’t definitive proof that early settlers traversed Alaska’s southern coast, it is thought that it may spark off deeper research into the hypothesis, with further sections of the coastline being analysed in the future. [caption id="attachment_8683" align="aligncenter" width="500"]

Jason Briner, PhD, professor of geology in University of Buffalo’s College of Arts and Sciences, says: “Our research contributes to the debate about how humans came to the Americas. It’s potentially adding to what we know about our ancestry and how we colonized our planet.” Prior to this research, the bones of an ancient seal were discovered in a nearby cave. As part of the new study, these bones are shown to be about 17,000 years old. The presence of this ringed seal indicates that after the depletion of the glaciers, resources including food were becoming available to humans. In short, the area had the capacity to support human life at the time when settlers may have been following this route into the Americas. “Our study provides some of the first geologic evidence that a coastal migration route was available for early humans as they colonized the New World. There was a coastal route available and the appearance of this newly ice-free terrain may have spurred early humans to migrate southward,” adds UB geology PhD candidate, Alia Lesnek. “Where we looked at it, the coastal route was not only open — it opened at just the right time,” says Charlotte Lindqvist, PhD, an associate professor of biological sciences at UB and a visiting associate professor at Nanyang Technological University. “The timing coincides almost exactly with the time in human history that the migration into the Americas is thought to have occurred.” [caption id="attachment_8686" align="aligncenter" width="500"]

The investigation was in challenging terrain. Photo: Jason Briner[/caption]

This evidence could further debunk the theory that humans populated North America via Canada. In order to have done this, they would have needed to walk through a path that opened up around 14,000 years ago. However, the route did not have the biological diversity to support human life until about 13,000 years ago. As humans were already living in Chile 15,000 years ago, and in Florida 14,500 years ago, there must have been another route in. This coastal migration theory could well start to fill in the blanks of what we now know about the American migration story.]]>
Share 0
Tweet
Share
Share
Share