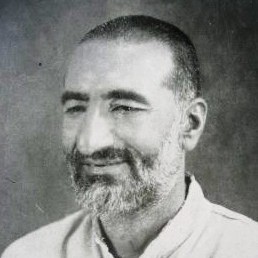 “I am going to give you such a weapon that the police and the army will not be able to stand against it. It is the weapon of the Prophet, but you are not aware of it. That weapon is forgiveness and righteousness. No power on earth can stand against it.”   Those are the words of Abdul Ghaffar Khan, better known today as Bacha Khan (“the king of chiefs”), speaking to thousands of volunteers, mostly his fellow Pashtun Muslims, who had joined his nonviolent army to work for better conditions in their local communities and also to free India from British rule.   Learning and Teaching   Bacha Khan, born in 1890, was the fourth child of a well-off landowning family in the Peshawar valley, in what is now Pakistan but was then British-occupied India.  His family were Muslims and members of the Pashtun tribe.  Bacha Khan studied at a British school where he admired his teachers’ commitment to learning and to serving their people. He was invited to join the Corps of Guides, a special Pashtun unit of the British Army. The British described the Pashtuns as particularly warlike, an attribute which they found useful as often as ominous. But this did not necessarily lead to respect, as Bacha Khan discovered when he went to visit a family friend who had enlisted in the Guides. A newly arrived British officer began mocking the friend’s Western-style haircut, saying, “Well, damn Khan Sahib, you too aspire to be an English man.”  The friend prudently held his tongue.  Bacha Khan was pained to realize that even the apparently elite Guides were still treated as second-class citizens in their own country.   Bacha Khan decided to pursue education instead of military service. He had the opportunity to study in England, but his mother urged him to remain at home. He obeyed her. In 1910, when he was twenty, Bacha Khan opened a mosque school in his hometown which taught students in both secular and religious studies.  In the following year he began to work with Haji Fazal Wahid, a freedom fighter turned educator who was opening similar schools in other underserved areas.  The British became suspicious of their activities; in 1915 they accused Wahid of  ‘trying to run a parallel government’ and ordered his arrest.  Wahid fled the country.  Bacha Khan remained free, but the school he had started was closed down. He spent the next three years traveling throughout his province and urging towns and villages to open schools, organize, and educate themselves.   Protest, Prison, and Self-Exile   In 1919 the British colonial government passed the Rowlatt Acts, which allowed Indian political prisoners to be jailed without trial.  Work stoppages broke out across India.  Bacha Khan helped to organize these in his region, and he convened a protest meeting attended by more than fifty thousand people.  He was arrested on charges of sedition and kept in jail for six months.   Bacha Khan regained his freedom just as the Khilafat (caliphate) movement was heating up.  Many Indian Muslims regarded the Sultan of Turkey as the Caliph or spiritual leader of Islam, and they were outraged by how Britain and its allies treated the Sultan and broke up the Ottoman Empire at the end of the First World War.  About sixty thousand of them decided to leave British India for Afghanistan, whose Muslim ruler they held to be both faithful and sympathetic.  Bacha Khan went with them.  But Afghanistan found it difficult to absorb such a large group, many of whose members wanted the Afghans to wage a war of liberation against the British in India. Most returned to India; Bacha Khan, again, was among them.

Local Reform   Bacha Khan, on returning to his country, also returned to his vision of empowerment through education and community organizing.  In 1921 he was involved in the founding of Anjuman-i-Islah-ul-Afaghana, a society focused on promoting unity among Pashtuns across national borders and lines of family and class through love of religion, cultivation of the arts, public service, and abstention from feuding, alcohol-drinking and overspending. Anjuman started free schools teaching a combination of Islamic studies, secular academic learning, and artisanal skills. There was no charge for the pupils, and no pay for many of the teachers. Bacha Khan took satisfaction in this work but didn’t lose sight of the harm done by colonialism.  He spoke publicly against British imperialism and was arrested again. This time he spent three years in prison, often in solitary confinement. On his release in 1924 he was praised as a hero, and many people joined Anjuman for his sake.   The Servants of God   In 1928 Khan met another peaceful organizer and protester named Mohandas Gandhi.  The two men presented an odd contrast in appearances—Gandhi was small and soft-spoken, Bacha Khan tall and loud—but they seem to have found each other kindred spirits. They spent hours in amiable arguments and eager discussions of faith and politics. The following year, Bacha Khan founded a peaceful army in his own province called the Khudai Khidmatgar, the Servants of God. The organization was open to all, regardless of creed or caste. Most members were too poor to afford uniforms; they colored whatever clothing they had with cheap chocolate-brown dye instead.  The British authorities referred to them as “the Red Shirts,” and some said that they were Bolshevists.  The Khudai Khidmatgar said otherwise. Members pledged: “Since God needs no service… I promise to serve humanity in the name of God. I promise to refrain from violence and from taking revenge. I promise to forgive those who oppress me or treat me with cruelty. I promise to devote at least two hours a day to social work.” “Social work” included teaching, outreach to neighbors in need, and participation in the rising wave of nonviolent protest against British rule.   The colonial authorities struggled to respond effectively to nonviolent protests across India. Some were particularly perturbed by this behavior on the part of the Pashtuns, whom they saw as archetypal warriors. Bacha Khan stressed that peacefulness and forgiveness, in addition to being core Islamic values, were especially important for a people with a warlike culture that too easily slipped into feuding and factionalism, or into violent struggles for freedom which could not succeed against a better-armed foe and were bound to provoke savage reprisals.   The response to peaceable protests was devastating enough. In 1930 Bacha Khan and many of the Khudai Khidmatgar joined protests linked to the Salt March. When Bacha Khan was arrested a crowd of demonstrators thronged the streets, calling for his release.  The British Army opened fire on the unarmed protestors, who neither dispersed not fought back. Some soldiers refused to shoot at peaceable people—and were afterward court-martialed and sentenced to life in prison.  Some obeyed orders. Between two hundred and two hundred fifty demonstrators were killed.  Soon after that martial law was declared throughout the province, the Khudai Khidmatgar was banned, and many of its members were publicly beaten and humiliated.  There was no violent resistance, there were no revenge attacks and there was very little defection—and many people impressed by that display of courage and self-restraint joined the Khudai Khidmatgar, which remained active throughout the struggle for independence.   A Tangled Legacy   Bacha Khan had cause to rejoice when the British finally withdrew from India in 1947, but he was deeply opposed to the partition of India and Pakistan. His first hope was for a united, multi-faith India; his second, for a separate Pashtun homeland separate from both Pakistan and India. Neither wish was granted, and he was vilified by some of his fellow Muslims as a Hindu-appeaser.  In Pakistan he formed an opposition party and was soon thrown into prison again. In Pakistan, as in British India before, he alternated between imprisonment and outside advocacy for freedom and for social justice.  In the end he spent more than half his life in prison. He was nominated for the Nobel Peace Prize, named Prisoner of the Year by Amnesty International, and granted India’s highest civilian award. His own country’s leaders were somewhat less admiring. Bacha Khan died in 1988 under house arrest at the age of ninety-eight.  His funeral was attended by tens of thousands of mourners from Pakistan, India, Afghanistan, and more remote parts of the world. At his own request he was buried in Afghanistan as a last sign of unity across borders.  Pakistani diplomat M. S. Korejo described the huge funeral procession which accompanied him across the border as “’a caravan of peace, carrying a message of love.”     To learn more about Bacha Khan, read Nonviolent Soldier of Islam: Badshah Khan, A Man To Match His Mountains, by Eknath Easwaran, or visit http://www.baachakhantrust.org/AbdulGhaffarKhan.pdf]]>