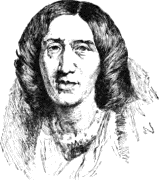 Literary Beginning Now Mary Ann Evans became independent with an income of a hundred pounds a year bestowed on her from her father’s estate. It was far from a fortune but more than enough to meet her needs. Now she faced the challenge of what course to follow in life. She was already well beyond the normal marriageable age for women in her society. Her marriage prospects were discouraging. It was at this time that she started to have her writings published. The well-known Westminster Review began publishing her stories. In 1851 she became Assistant Editor of this publication. It was very unusual at the time for a publication to have a woman in such an important position but Evan’s literary skills were too good to forgo. Private Scandal There may well have been other reasons for Evan’s acceptance onto the staff of the Westminster Review. Her editor, Henry Lewes took a romantic interest in the young authoress. His wife had deserted him and his three children. Mary Ann Evans came to fill her place but their relationship was never formalised in the church wedding social norms at the time expected. Evans’s very respectable mid-Victorian family circle were scandalised by the life she was leading. Lewes encouraged Mary Ann’s creative writing by offering ideas for themes and editing the manuscripts. She decided to use a male penname since she thought that in that way her words would receive the serious attention she believed they deserved. Literary Fame  In 1857 Blackwood’s Magazine published her “Scenes from Clerical Life” In 1859 she enjoyed her first major literary success when her novel “Adam Bede” became a best seller. The character of Adam Bede was based in part on her recollections of her father. She also worked into the novel her religious and artistic views. The historical background of the Chartist political unrest of the late 1830s and 1840s would have been familiar to most of readers. In her subsequent novels she continued to explore the religious and moral issues of the day that occupied her mind. For example, “Middlemarch” (1872) is set in the period of conflict surrounding the passing of the 1832 Reform Act. The heroine of the novel finds herself trapped in a loveless marriage and contending with the social limitations women faced at this time. In perhaps the most famous of all her novels, “the Mill on the Floss” (1860), the tragic tale of the miller’s daughter is viewed by literary experts as representative of Evan’s own struggles and conflict with her own family. The death of Maggie and her brother in the flood is also viewed as symbolic of the way the authoress viewed her own life. In her last major work, “Daniel Deronda” (published in 1876) she chose again to explore the frustrations of an unhappily married society lady while also finding a way to attack religious prejudices of the day. Following the death of Henry Lewes, Mary Ann Evans married a friend who was 20 years younger than her – John Cross. She died on 22 December 1880 and was buried in London. ]]>