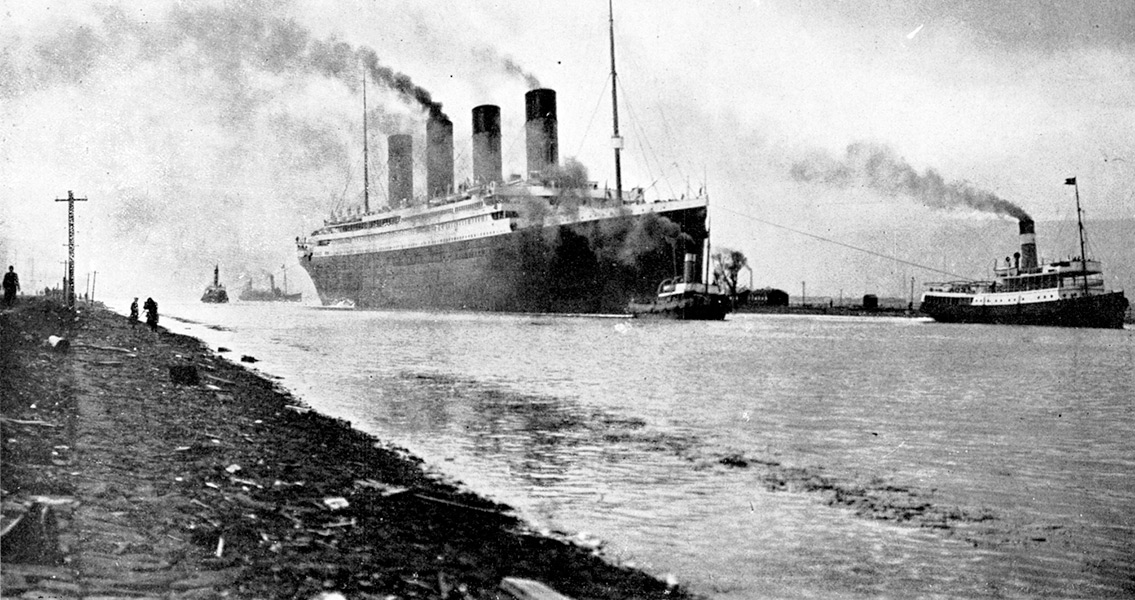 The Titanic Sets Off

Titanic embarked on its fateful maiden voyage. Departing from Southampton, England, with over 2,200 passengers and crew, the ship was meant to arrive in New York on the 17th April. The product of intense rivalry between ship manufacturers, and in particular that of White Star Line and Cunard, the Titanic was the largest steam ship ever built. Cunnard had launched the Mauritania and Lusitania in 1907, two ships lauded for spectacular exteriors and beautiful interiors. The Titanic was built in response to these two ships, with construction beginning in 1909. Its hull was completed in May 1911, and at the time held the accolade of being the largest movable man made object in the world. As has been well documented in books, television programmes and movies, the Titanic never completed its journey. On the 14th April, at about 11:30pm, the ship struck an iceberg somewhere in the Atlantic. The Titanic‘s look outs had spotted the ice berg just before the impact, and attempts at evasive action had avoided a direct hit. Nevertheless, ice under the surface of the water had created a 300 ft cut into the ship’s hull below the water line. After investigating the harm done to the ship,the Titanic‘s captain realised the damage was too extensive, and the ship would sink. Calls for help were made to surrounding vessels and the order to abandon ship was given. Following a chaotic and ineffective evacuation procedure, the ship sunk three hours after the initial impact with the iceberg. Only 700 people escaped the disaster. Several factors contributed to the horrendous death toll, and various theories have been put forward since as to exactly what went wrong on the Titanic‘s first and only voyage. Many experts focus on design flaws in the ship itself, and the inadequate safety regulations of the period. The Titanic was deemed ‘unsinkable’ as a result of its system of watertight bulkhead doors. These doors could be operated individually or in unison from the ship’s bridge, and were intended to seal off sections of the ship’s hull in the event that it was breached. However, these doors could not prevent water spilling in from other compartments, a feature present in the two liners produced by Cunard. Experts have since hypothesised that if the Titanic had had the same system as the Lusitania and Mauritania, it would not have been sunk by the iceberg. By modern standards, the most shocking failure was the lack of emergency provisions on the ship. The Titanic held sixteen life boats and four Englehardt ‘collapsible’s’ which could only hold 1,178 people between them. As mentioned above, the debut voyage of the Titanic saw the ship carry over 2,200 passengers, and this was not even the ship’s full capacity. Nevertheless, the ship had passed the recommended safety standards of the British Board of Trade Regulations, giving a startling insight into health and safety considerations of the period. Of course, the disorderly evacuation of the Titanic meant that the life boats were not full when they left the ship anyway. An evacuation drill had actually been scheduled for the morning of the 14th April, but was cancelled for reasons which have never been determined. Again, many experts have speculated that completing the drill could have made a significant difference to the effectiveness of the evacuation. Many modern analyses of the Titanic tragedy are perhaps mislead by the benefits of more than a century of hindsight. The tragedy may have been avoidable, it is impossible to say, but the details of the sinking reveal the dramatic changes that have occured in standards of health and safety in the years since.]]>