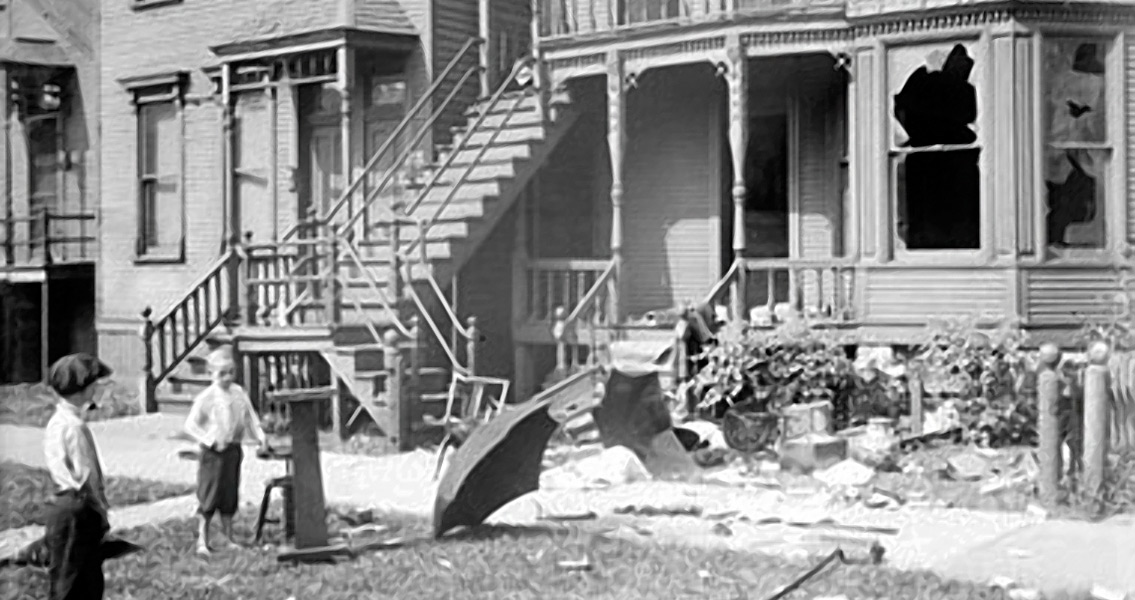 Between 1910 and 1920 the city’s African-American population had more than doubled from 44,000 to 109,000. Competition for adequate housing could not be dealt with by the city authorities, and many were forced to live in slum like conditions. The trigger which set off the Chicago Race Riot came on 27th July, 1919. Reflecting broader segregation in the city, the beach of Lake Michigan was divided by an invisible boundary which stretched out into the sea. Eugene Williams, an African-American teenager, drifted into the white section of beach while swimming. A gang of white men pelted him with rocks and stones as he swam. Exactly how is unclear, but Williams drowned in the lake, either as a direct result of the attack, or because he was too afraid to swim ashore when he became exhausted. When police arrived on the scene, they refused to arrest the men who had been pointed out as responsible for the attack on Williams. Angry crowds started to gather, and distorted stories of what had happened to Williams began to spread through Chicago’s South Side. In a city dominated by both white and black gangs, the drowning of Williams was enough to ignite the mounting tensions and trigger fighting around Chicago’s South Side. The violence escalated each subsequent day, as Chicago descended into a lawless battle ground. The state militia were called in on the 30th July, but their presence made little difference and the violence continued until 3rd August. By the time the violence had subsided, twenty three black and fifteen white people had been killed. Just as devastatingly, considering the already severe housing crisis, 1,000 black families were left homeless after their homes had been vandalised. Perhaps more than the other riots of the Red Summer, the sheer scale of the Chicago Race Riot brought the USA’s growing racial conflict into clear perspective. Some called for stronger, more formalised segregation in the city, although this was largely ignored by both the US Congress and city officials, particularly because President Woodrow Wilson publicly declared that Chicago’s white gangs had been the main aggressors in the riot. The Chicago Commission of Race Relations, made up of both white and black members, was created to look into the causes of race conflict in Chicago and work on solutions. On a national level, Wilson pushed for new Congressional legislation and voluntary organisations to try and foster racial harmony. Race divisions would remain a hugely important issue in the USA for years to come, but the riots at least encouraged some attempts to confront this mounting problem.]]>