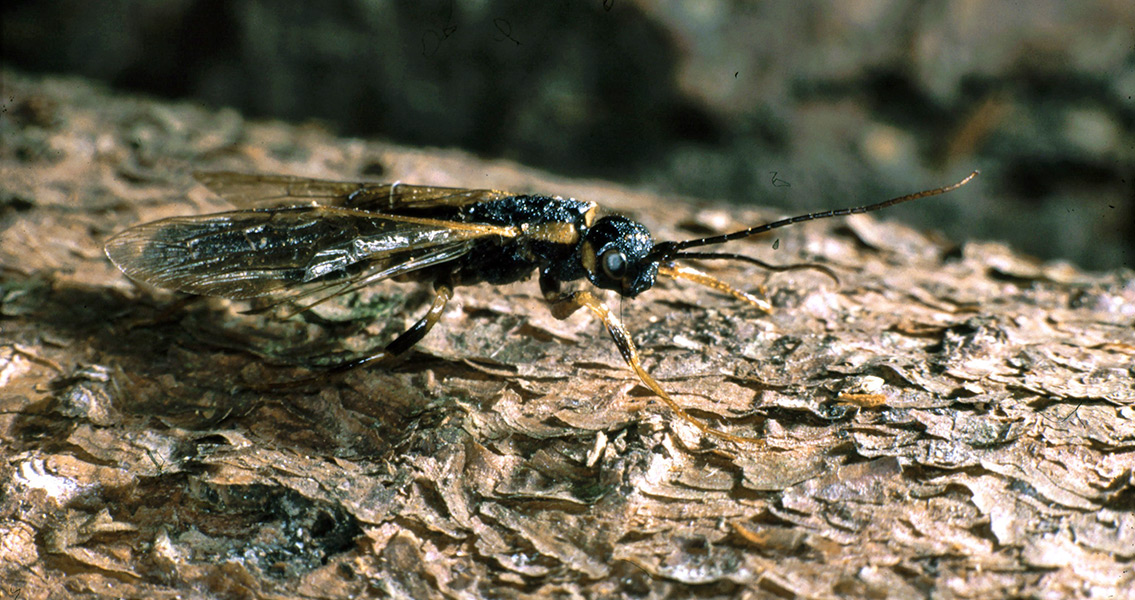 Ypresiosirex orthosemos Most hikers would be fairly alarmed to come across a giant wasp, but the ancient species is only slightly larger than its modern cousins according to Archibald. Today’s horntail wood-wasp is considered a significant pest in forests, the young wasps tunnel through tress causing a fungus to grow which they then eat. The fungus produces poisons, while the wasp emits a secretion which weakens the immune system of the tree. This combination eventually causes the tree to die. The discovery has given researchers insight into the modern world and how it began coming together after the dinosaurs became extinct. Many of the trees and plants today’s horntail wood-wasps enjoy were also favored by the old wasp and have been found as fossils in the same forest as the ancient horntails; including trees (hemlock, fir, spruce, pine, spruce, sequoia, hemlock, and cedar) and flowering plants (beech, maple, elm, ash, hickory, ash, elm and poplar). Furthermore, the discovery of Y.Orthosemos indicates to researchers which types of animals and plants can coexist when the climate is slightly warmer. The ancient forest the wasp inhabited grew during a period of Earth’s history when a large portion of the globe was experiencing tropical heat. With the significant elevation of this area of British Columbia, the McAbee forest would have had a climate much like modern-day Vancouver, temperatures preferable to wasps. This means the ancient horntailed wood-wasp lived alongside other animals and insects typically associated with a tropical climate, including a cockroach species which is found only in Fiji today. Y.Orthosemos is just one of the three new wasp species that Archibald and Alexandr Rasnitsyn with the Russian Academy of Sciences recently identified in an article published in the online journal The Canadian Entomologist. The two other new wasps were found at the McAbee forest site as well. In addition, the article also describes three newly discovered sawfly species found in Republic, Washington and in British Columbia. According to Dr. Archibald people often ask him why they should bother caring about what insects flew around 53 million years ago. His answer is simple: The more understanding we gain about the early beginnings of modern-day forest ecosystems and how animals and plants responded to the changes in climate over time, the better prepared we’ll be going forward. The McAbee fossil beds are a designated heritage site and contain many first class specimens for experts and researchers. The Canadian government hopes to provide more opportunities for public exploration and interpretation of the many new discoveries in the area. Image courtesy of Wikimedia Commons user: Stanislaw Kinelski ]]>