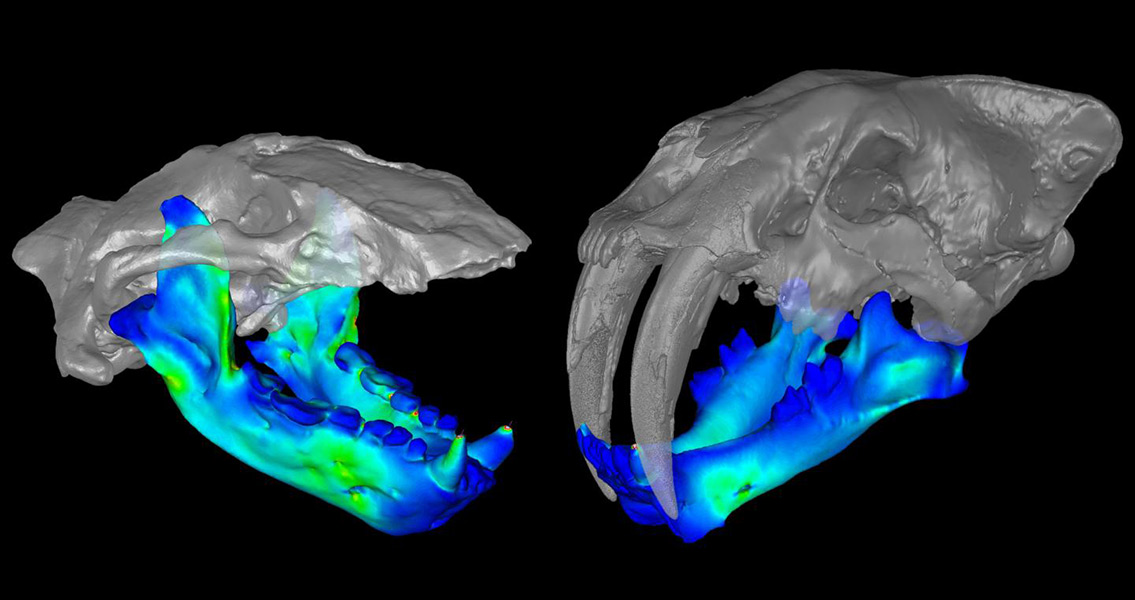 “Marine Bear” May Have Had a Smilodon-Like Bite

K. newportensis and K. clallamensis. Originally thought to be related to the raccoon, modern paleobiologists say the genus is likely to be most closely related to the sea otter. However, a team of researchers from the American Museum of Natural History found that the pair of mystery predators had similar jaw construction that would have been ideal for anchoring a pair of long, saber-like teeth against prey encased in shells and using leverage to pry them open. Research paper co-author Camille Grohé, a postdoctoral fellow from the museum’s Paleontology division, said in a recent press release that the initial scope of the study was to see if the two Kolponomos species used techniques similar to those of sea otters to feed. These modern marine carnivores often pry mussels, clams, and other hard-shelled marine invertebrates off of surfaces by using rock tools or their bare hands. Sea otters then crush these hells open with their teeth or smash them open with a rock tool, and the researchers were looking for parallels. However, a curious parallel was discovered when Z. Jack Tseng, a fellow paleontologist and colleague of Grohé, found similarities between the jaws of the Smilodon and that of the Kolponomos specimens. Tseng, the lead author of the study, said that both the saber-toothed tiger and the marine bear had unique profiles featuring deep jawbones with a distinctive tapering towards the back. Additionally, both Kolponomos and Smilodon have expansions at the back surface of their skulls and at their mastoid process. This suggested to the researchers that both the tiger and the two marine bear species would have had a plenitude of muscles attached therein that would have made it easy for the animals to move their heads both with control and with considerable force. Nobody expected to involve a saber-toothed tiger into a study of clam-eating marine carnivores, Tseng added, but that is exactly what ended up happening in the end. Research into the skulls of the marine bear specimens was conducted at the museum’s Microscopy and Imaging Facility through the use of computed tomography (CT). CT scans of the skulls were compared to those of other carnivores, including leopards, brown bears, river and sea otters, grey wolves, and the Smilodon. The data gathered was applied to creating biomechanical models to determine which most closely matched those of the Kolponomos specimens. The team found that the saber-tooth tiger’s jaw mechanics and those of the marine bear bore the closest similarities out of all the other animals included in the study. The results indicate that Kolponomos might have fed by using its jaw to pry and dislodge marine prey before using the rest of its teeth, adapted to cracking the shells, to enjoy its meal. No, this doesn’t mean that Kolponomos was related to Smilodon like some sort of monstrous “manbearpig” creature as popularized by satirical American television. Instead, researchers say that this is clearly a case of convergent evolution between two completely unrelated species. For more information on the research article, visit the journal Proceedings of the Royal Society B, here Image courtesy of @ AMNH/J. Tseng, C. Grohé, J. Flynn]]>