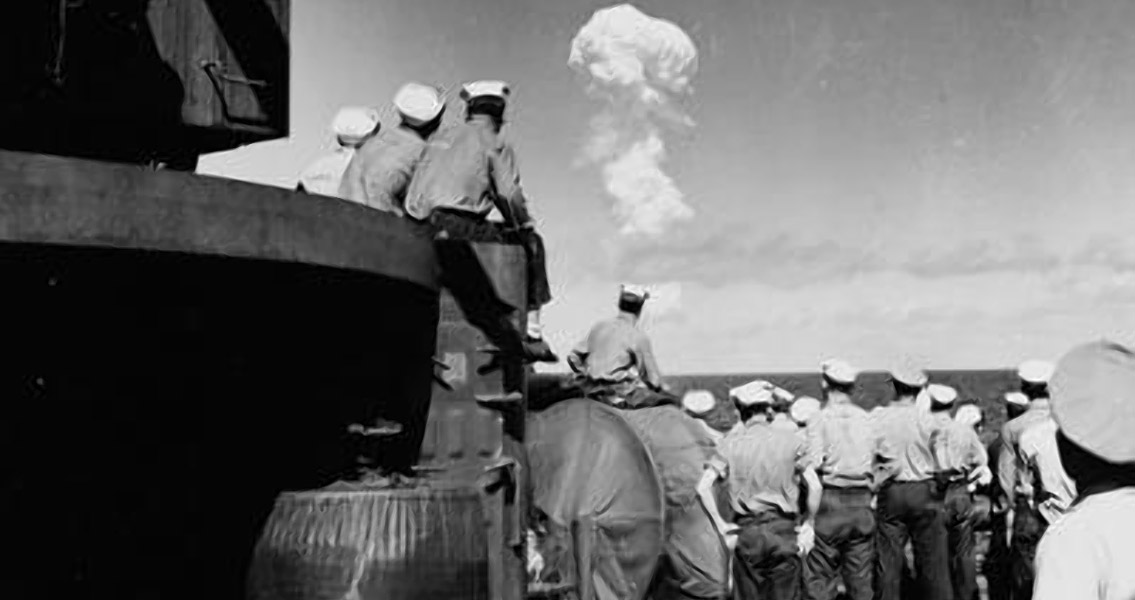 Posted By: David.DeMaron: May 01, 2016In: Breaking NewsNo Comments
Print Email

Independence, a US Navy vessel deliberately sacrificed in 1946 at the Bikini Atoll nuclear weapons tests at the very inception of the Cold War. The Independence, which was used by the Navy as a nuclear test platform for five years, eventually met its end when it was purposefully scuttled around 30 miles off the coast of central California. The location, long kept secret to prevent the Soviet Union from gleaning any information that would aid in their own endeavors to develop bigger and more devastating nuclear weapons, was pinpointed in 2015 through a joint effort between aeronautics giant Boeing, and the Offices of National Marine Sanctuaries and Ocean Exploration from the US National Oceanic and Atmospheric Administration (NOAA). NOAA and Boeing used a combination of high-resolution sonar imaging and an unmanned submersible known as “Echo Ranger” to locate and safely survey the still-irradiated wreck of the Independence. The resultant case study, plus newly declassified files on the Navy ship straight from the US National Archives, concerning its time as a nuclear weapons testbed, have been published in the Journal of Maritime Archaeology (JNA). In a press release from journal publisher Springer, one of JMA’s editors-in-chief, Annalies Corbin, remarked that the journal was honored to be presenting such historically significant information on Cold War archaeological efforts. Corbin hopes the newly-published material will launch new conversations on the management of maritime underwater cultural heritage sites such as the final resting place of the USS Independence. The lead scientist of the Independence mission and NOAA’s Director of Maritime Heritage for its Office of National Marine Sanctuaries, James Delgado, was also quoted by the press release, stating that merging documentary evidence with a study of the physical remains of a maritime archaeological site is a goal that can and should be pursued. Delgado not only co-authored the main report appearing in the newest issue of JNA, but also penned an article on the many different vessels that survived the initial weapons test at Bikini Atoll but were not sunk there. Corbin, who edited the issue, also ensured that additional essays and articles from experts in the field of marine archaeology and Cold War archaeology were included. Other authors include Robert E. Neyland, head of the Underwater Archaeology Branch of the US Navy, and Todd Hanseon, the Los Alamos National Laboratory’s Chief Historian and Archaeologist. The infamous tests at Bikini Atoll, The Bikini tests, conceived and undertaken just one year after dropping not one but two nuclear weapons on Japan, at Hiroshima and Nagasaki, to end the Second World War, was one of the most visible and noteworthy events to signal a fundamental shift in postwar history. In one of the newly-declassified reports dating from the era, it was suggested that the awesome power of nuclear weaponry represented a new era where the utter destruction of man had become possible, scouring the Earth of nothing but vestigial traces of humanity. The newest issue of JMA is available at www.springer.com Image courtesy of Naval History and Heritage Command]]>