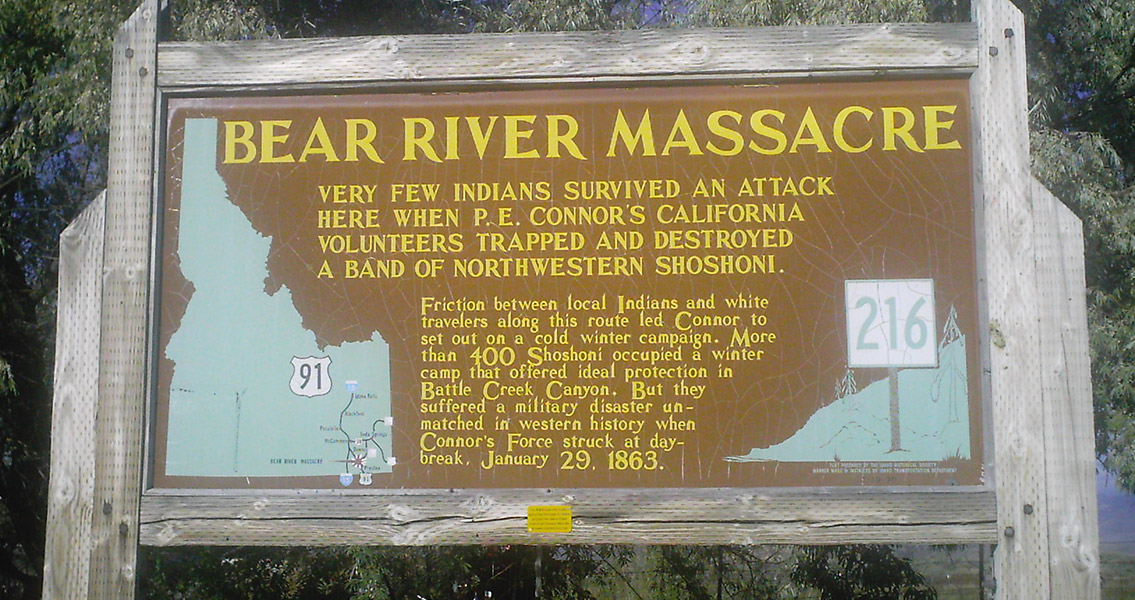 Posted By: David.DeMaron: May 26, 2016In: Breaking NewsNo Comments
Print Email

Idaho State Journal, was part of a team from Utah State University that has been investigating the Bear River Massacre site for the last three years. The archaeologist presented the team’s findings at a meeting of the Pocatello Historic Preservation Committee at Idaho State University. It has not been an easy endeavor to find the site of the massacre, thanks to the shifting riverbed of the Bear River. The path of the river has changed numerous times over the last 150 years, which required the researchers to engage in innovative approaches to find definitive answers. Starting with maps that had been penned by soldiers who were part of the massacre in 1863, the team used modern technology to make a closer determination of the location. As a result, the riverbed as it wound during the 1860s was found; the site of the camp, which had been situated at the confluence between Bear River and Battle Creek, had moved about 700 meters southward since that fateful day in early 1863. The original site, near Preston within Franklin County, is located within a 718-acre swathe of land that was set aside by the National Park Service in 1990 in order to commemorate the bloody battle. However, the exact site had been in question up until Reid and his research team pinpointed it. However, the site of the slaughter was not a mystery to everyone, according to Darren Perry, who was also at the ISU event. The vice chairman of the Northwest Band of the Shoshone Nation said that the survivors of the battle, which numbered around 160 women and children, kept the memory alive. Perry remarked that his grandmother would show him where his people’s lodges once stood, much as her grandfather had shown her. Perry’s great-grandfather was an eyewitness to the event, having been just 12 years old at the time. Despite the atrocities committed so long ago, Perry lauded Reid and his research team for their diligence in working on laying bare the history of the Bear River Massacre. “To me, the more knowledge you can get, the better off you are.” Perry remarked to the Idaho State Journal. “All they are trying to do is tell us the story.” Reid says that the impetus behind the attack by white settlers was part of a policy to deter any raids by Native Americans. The second, and perhaps more important reason, was to make it easier for Mormon farmers to settle the nearby Cache Valley. Image courtesy of Wikimedia Commons user: Robert Scott Horning]]>