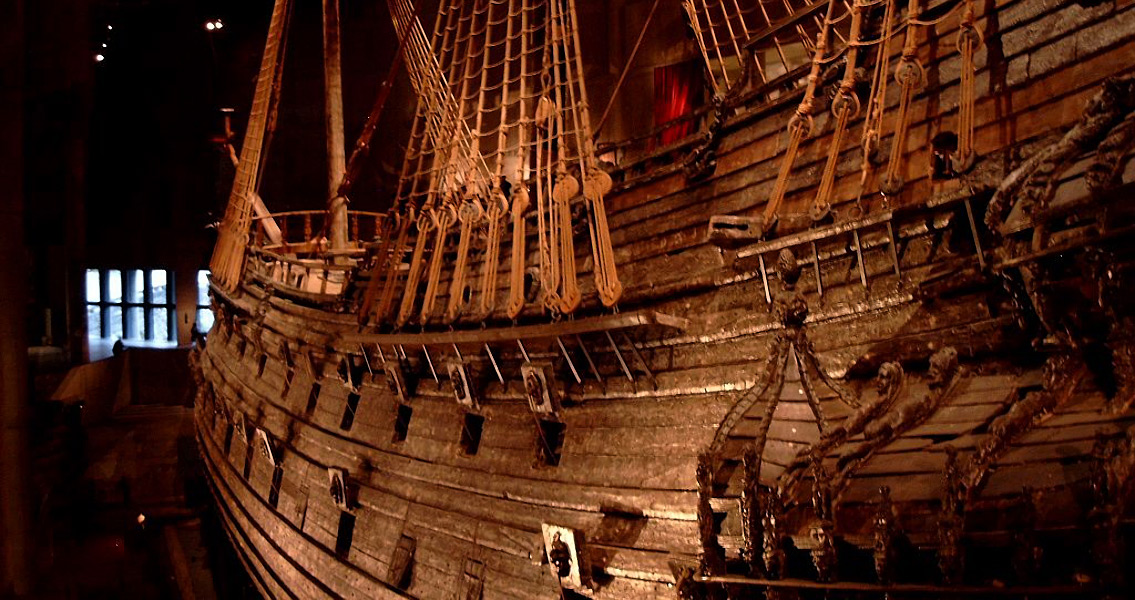 The Local, the ship is approximately 45 meters long and carried 68 or 70 cannon. Launched in 1682, it was the first ship ever built in Karlskrona, eventually ending up back where it started in 1713. A curator with the Swedish National Maritime Museums, Jim Hansson, explained in the article that the warship may have been sunk deliberately in order to utilize its cannon to defend the city during the King’s campaign against Russia, a campaign which would eventually lead to the ruin of the Swedish Empire, causing Karl XII to flee to the Ottoman Empire. The newly discovered ship is remarkably similar in size and age to the warship Vasa. The only ship from the seventeenth century to ever be salvaged practically fully intact, the 64-gun Vasa, which sank on her maiden voyage in 1628 and was salvaged in the 1960s, is on display at the world-famous Vasa Museum in Stockholm, Sweden. Opened in 1990, the Vasa Museum is reportedly Scandinavia’s most visited museum, with over 1.3 million visitors in 2016. The Vasa foundered after sailing approximately 1,300 meters into her maiden voyage. Built on the orders of Sweden’s King Gustavus Adolphus at the naval yard in Stockholm, she was armed mainly with bronze cannon which were cast specifically for the ship. Richly decorated, after completion, the Vasa was among the most powerfully armed ships in the world. However, she was also dangerously top-heavy and unstable, and yet despite her lack of stability the ship was ordered to sea. During the recovery process in 1961, thousands of objects and artifacts, along with the remains of fifteen people at a minimum, were discovered by marine archaeologists inside and around the ship’s hull, including weapons, clothing, cannon, coins, tools, cutlery and six of the ten original sails. These items, as well as the ship herself have provided researchers with invaluable information regarding naval warfare, shipbuilding and everyday life in Sweden in the early seventeenth century. The Blekinge, however, is far from being in good condition. A part of the ship seems to have been flattened when the stone pier at Karlskrona shipyard was constructed, although it’s possible the lower sections are better preserved. “Part of her is embedded in deep layers of sediment. We believe there could be a relatively in-tact level of deck under it. The ship’s not at all as well preserved as the Vasa, but the part which lies outside of the pier could be better preserved,” Hansson explained in the article. It’s likely that further research will be conducted on the shipwreck, given its historical significance as the first ship built at the Karlskrona shipyard, where a naval base is still located. The shipyard was established around 1680, at practically the same time as the city. It was a necessary facility due to heavy losses suffered by the Swedish navy in 1659. Areas of the city, consisting primarily of the Naval Port, have been declared a UNESCO World Heritage Site. ]]>