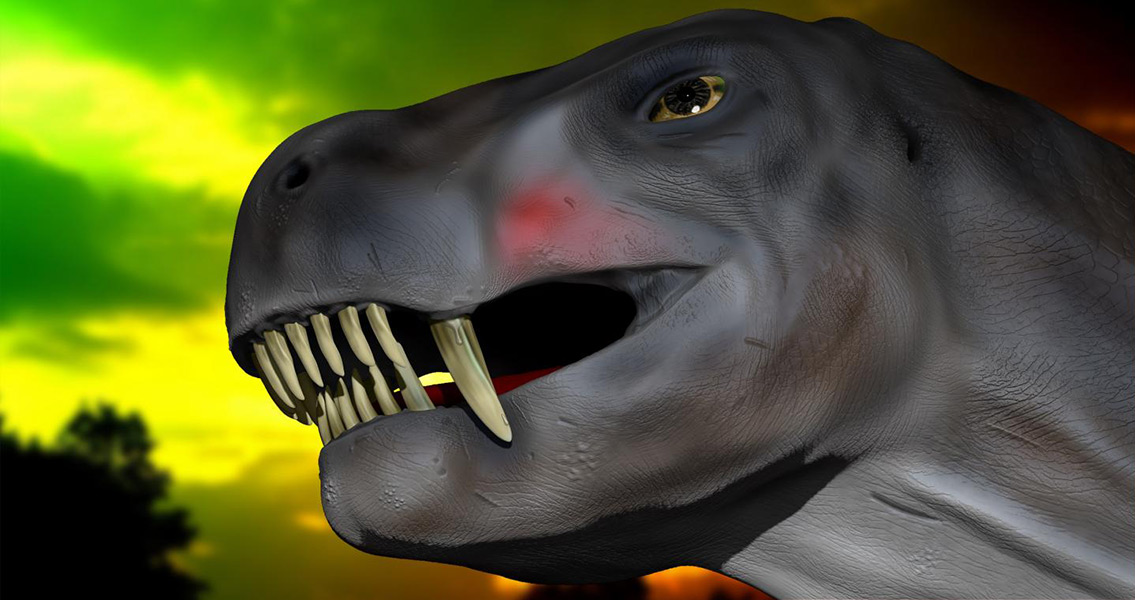 Euchambersia, a therapsid which was one of the evolutionary precursors to mammals. Euchambersia pre-dates the rise of even the first dinosaur by millions of years. While technically a reptile, it is inextricably tied to the rise of countless mammalian species, including our own. Euchambersia lived around 260 million years in the past. The small, dog-sized proto-mammal developed a unique biology in order to better protect itself from larger, more aggressive predators of the era, and also to aid it in hunting prey of its own. Living in South Africa near Colesberg in a region known as the Karoo, the therapsid evolved to develop a circular and deep fossa in its upper jaw behind its canine teeth. Venom would be produced in this hollow to be delivered in a bite through a complex series of canals and grooves in the Euchambersia’s bones and teeth. Today, the most well-known venomous animals are of course snakes, but Dr. Benoit pointed out that their fossil record only stretches back around 167 million years. Proving that Euchambersia even had venom glands was problematic, as the glands don’t fossilize. Benoit and his fellow Wits University researchers, along with the aid of London’s Natural History Museum, employed 3D imagery and CT scanning techniques to analyze the only pair of fossilized Euchambersia skulls found to date. The results of this analysis were described as “stunning”, as the therapsid was found to have had anatomical adaptions that indicated venom production. These adaptations included the fossa and a network of canals and grooves, as well as additional, previously undiscovered teeth that had sharp ridges which would have aided in injecting venom through the Euchambersia’s bite. The therapsid’s venom would have been passively introduced through its bite, unlike modern snakes with their needle-like grooved fangs that act to inject venom directly into their prey. In fact, the venom of the Euchambersia flowed freely into its mouth and through the ridges on the outside of its canines into whatever it had bitten. Dr. Benoit said that Euchambersia could have used its venomous bite for hunting or protection. With the majority of modern venomous species using their bite for hunting, the researcher feels that the therapsid would have likely followed the same route. Additionally, Dr. Benoit pointed out that animals from that time period, specifically therapsids, were not all insectivores but instead had a diverse diet. The new research paper, published in the journal PLOS ONE, can be found online here Image courtesy of Wits University]]>