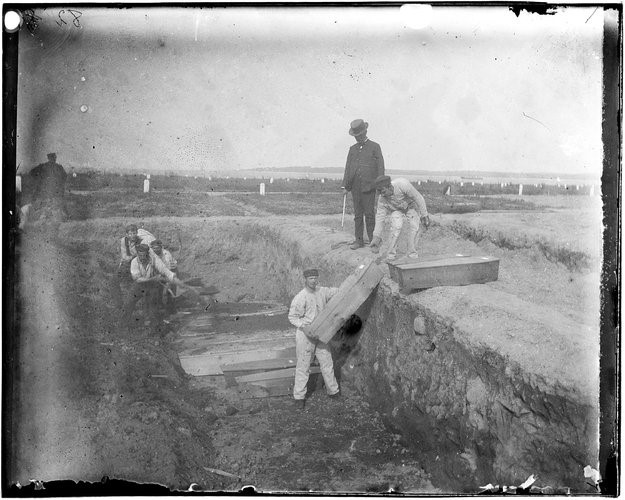 Posted By: Glynn.Forsytheon: May 11, 2018In: Breaking News
Print Email

City Island and Hart Island (lower right)[/caption] Forensic anthropologists were brought in by the Department of Correction from the office of the city medical examiner some weeks ago to collect and catalog about 174 bones from the island, a repertoire which included 16 pelvic bones, 31 femurs, six jawbones and six skulls. All over the shores of the rocky island, red flags can be seen in places from where the remains were collected. Advocates for the island who have been involved in a long struggle to see the site converted into a historical site and a national park say that the bones exposed bones are reflections of the inactions on the part of the system to do nothing to improve the site. This is in fact not the first time Hart Island has been ravaged by floodwaters to reveal the grim image below the surface of the island. In 2012, hurricane sandy besieged the coast and exposed a cistern used during the civil war. Several other storms have eroded the island at various times even long before then as revealed in a 1985 report which recounted that several bones including a human skull were found on the beach. While repair work on the island which was initially billed to begin in the year 2020 has been moved up by a year due to the urgency of the situation, officials have decided that a monthly cleanup of the island will continue in order to remove exposed remains for re-burial. Melinda Hunt, one of the island advocates who has been involved in documenting the conditions on Hart island since 1991 on a recent photography trip around the island, pointed out places along the shores where the exposed bones were seen. According to her, “They came to clean this up, but it isn’t the first time and it won’t be the last”]]>