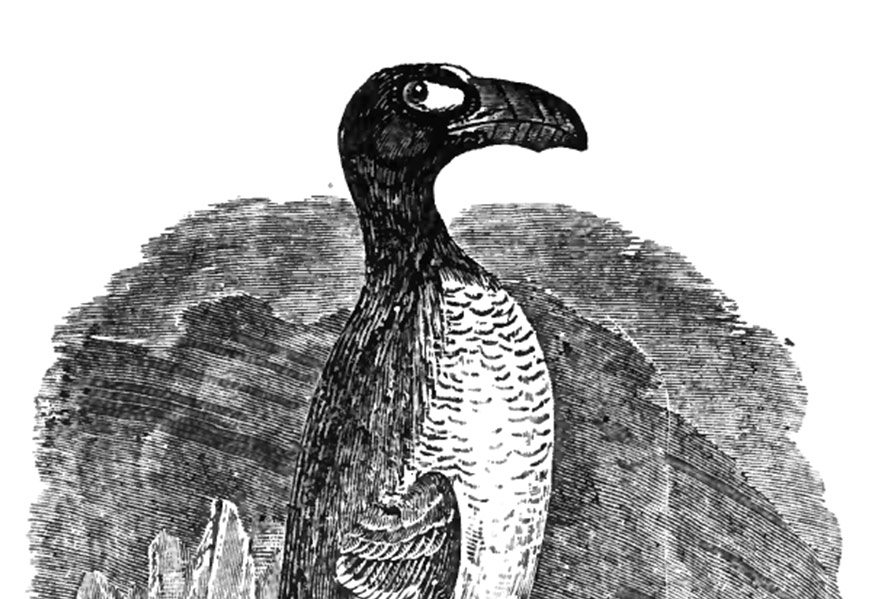 Bone from the Extinct Great Auk Unearthed at the Scottish Seabird Center An upper arm bone of the extinct Great Auk, also known as Scotland’s Dodo, was unearthed in an archeological dig at the Scottish Seabird Center at a location called the Kirk Ness site. Archaeologists were excavating the grounds of the Scottish Seabird Center when they uncovered this invaluable piece of bone fragment of the Great Auk, also known as Scotland’s Dodo. The archaeological dig, led by Addyman Archeology and supported by Historic Scotland, uncovered a number of invaluable animal bones belonging to the mid-18th century, in addition to the bone of the Great Auk. This bone fragment was, reportedly, unearthed near the entrance area of an old building. The Great Auk, also called as Scotland’s Dodo, was a flightless, Penguin-like bird. The meter-tall bird, while extant, had a range that extended from north-eastern United States all the way across the Atlantic, and covered the British Isles and Northern parts of Spain and France. As the bird could not fly, it was an easy target for hunting. Moreover, it was a staple food of people in the Middle Ages, both because of its inability to fly and its availability in abundance. However, the Great Auk started experiencing a severe decline in its population because of massive hunting, until it finally became completely extinct by the middle of the 19th century. The bird was last seen on St. Kilda British Waters in 1840. The Great Auks largely bred on the rocky and remote islands present in the Atlantic Ocean region. Since these islands provided great access to food, these birds flourished. The birds were also found on the coasts of Iceland, Greenland and Canada, and as far as the British and Norwegian coastlines. Mr. Tom Brock, Chief Executive of the Scottish Seabird Center said, “The discovery of the Great Auk bone on site at the Scottish Seabird Centre is fascinating but also very sad.We are so fortunate in Scotland to have a rich variety of seabirds and we must use the extinction of the Great Auk as a warning to future generations to look after our wonderful wildlife and the marine environment as an absolute priority.” Mr. Brock also said, “There are both behavioral and environmental lessons that must be taken from this internationally-important finding, and as an educational and conservation charity we will remain dedicated to inspiring people to enjoy, protect and learn about wildlife and the natural environment.” Although this excavation sheds light on the Great Auk and endangered wildlife, it is also believed be able to provide better insights into human society during the Middle Ages. Remains of various domestic buildings, in addition to the remnants of daily life at North Berwick, manage to provide us with a limited but encouraging glimpse of the way in which people and wildlife of East Lothian had been at that time. It will also help us gain a sounder understanding of extinction as a phenomenon, and help us make better decisions regarding our present-day environmental scenarios. Mr. Todd Addyman, of Addyman Archeology, said, “The discovery of the Great Auk bone at Kirk Ness is an illuminating find, as we seek to understand and document the importance of the area in the history of wildlife and human habitation in the Middle Ages. We hope that its discovery helps historians and conservation experts, such as the Scottish Seabird Centre, to educate future generations about the precious nature of our natural resources.” Senior Archeology manager of Historic Scotland, Mr. Rod McCullagh, said, “In the last two decades, there has been a renaissance in our understanding of the archaeology and history of early Medieval Scotland. The discovery of the remains of domestic buildings and the associated detritus of daily life at Kirk Ness gives us a glimpse of what ordinary life was like in East Lothian at this time. That ‘daily life’ involved the killing of such valuable birds as the Great Auk is no surprise but the discovery of this single bone perhaps attests to a time when hunting did not overwhelm such a vulnerable species.” ]]>