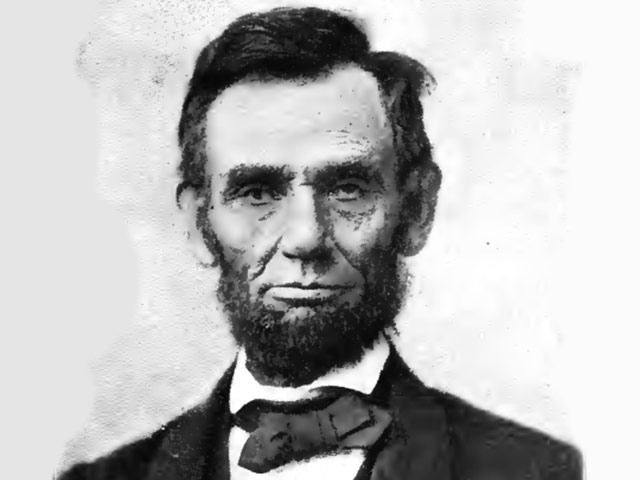 The Most Influential President of the Usa – Abraham Lincoln

th, 1809. In his own words his paternal and maternal ancestors came from “undistinguished families.” He lost his mother at the age of ten. He grew up on the wild western frontier of the United States. He was large and very strong for his age and was soon adept at using an axe. He also got an early introduction to hunting. He describes in his autobiography how he shot a wild turkey at the age of eight. Lincoln’s opportunities to acquire an education were limited in this isolated location. He claimed that he only learned to “read, write, and cipher” in his youthful years but his ambition and natural talents made up for the lack of formal education. He was an inveterate reader and when he exhausted the limited reading material his poor house contained he would go to borrow books from neighbours. Although he was physically well-suited to farm work and other manual labour his intellectual strivings would not leave him content with a farm worker’s life. In his twenties Lincoln moved to New Salem, Illinois. He supported himself as a store keeper and post master. For a short period he also served as an officer in one of the Indian wars but his military service was not particularly distinguished. However, his oratory and ways with people endeared him to the local community. In 1834 he was elected to the local legislature. In the later 1840s he also served for a brief period in Congress. At the same time he was serving as a legislator Lincoln qualified as a lawyer and built up a successful legal practice. For most of the 1850s Lincoln concentrated on his legal work, but he was not able to remain indifferent to the growing divide in America over the issue of slavery. Lincoln was a keen opponent of slavery but that was not equivalent to saying that he believed black Americans should have equal rights with white citizens. The reputation he developed as an eloquent but moderate opponent of slavery stood him in good stead when he contested the Senate seat of Stephen Douglas in 1858. Although he did not unseat Douglas his debating skills made a strong impression across the nation. He was thus a natural choice for the Republican Party in the Presidential elections of 1860. Lincoln was not considered the mostly likely to win the election but contrary to expectations he triumphed by gaining 180 out of 303 electoral votes.

A good claim can be made that Lincoln’s greatest achievement was rising from a humble background to the country’s highest office, but most people would rate his time in the Presidency as his most outstanding success. Certainly the challenges he faced would have broken someone of lesser caliber. Lincoln bore no responsibility for the breakup of the union and the bitter Civil War that tore such a deep wound in the nation. His talent in leading the United States during this stormy period made a major contribution to the victory of Union forces. His inspiring addresses to the nation and his courageous decision to abolish slavery made his presidency a seminal period in the shaping of America’s identity. When John Wilkes Booth assassinated Lincoln on April 14, 1865, he thought he was striking a blow in support of the Confederacy. In actuality his act deprived America of the best person able to heal the nation’s wounds.]]>