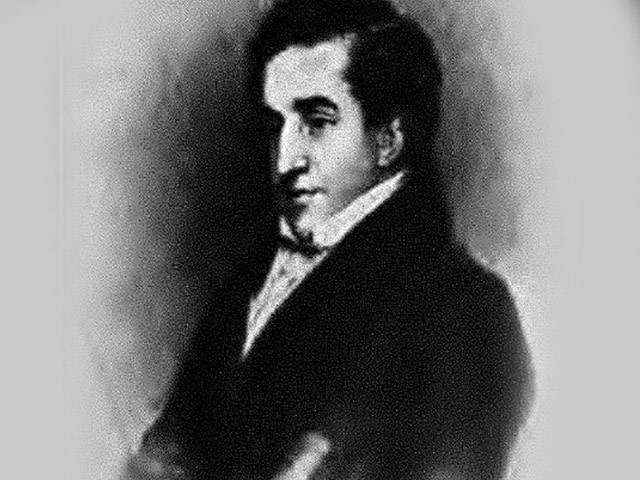 Two Hundred Years of the Corsair

st of February 2014 marked the 200th anniversary of the publication of Lord Byron’s ‘The Corsair’. The lyric poem sold out the initial run of 10,000 copies on the day of its release, an impressive feat even by modern standards and unprecedented back then. The poem was hugely popular in nineteenth century England, and the continued fascination with Byron shows that his works are still capable of striking a chord. The plot revolves around the life of Conrad, the Corsair from the poem’s title. The first canto details Conrad’s decision to raid the riches of the Sultan Seyd, and his wife’s endeavours to make him change his mind and stay at home. The second canto details the raid itself. Conrad and his men launch their attack on Syed. Initially everything goes according to plan until Conrad is distracted by, and attempts to rescue, the women in the Sultan’s harem. This gives the Sultan’s men time to regroup and capture Conrad. Gulnare, the Sultan’s favourite slave, comes to Conrad in his cell and vows to try and save his life as thanks for his attempt to save hers. In the final canto, the escape plan begins with Gulnare attempting to trick Syed into releasing Conrad. This fails, and when unable to convince Conrad to kill the Sultan, Gulnare does so herself before the successful escape. Gulnare returns with Conrad to his home, where he finds Medora has died from grief, having believed him dead. At the end, Conrad leaves the island alone…

“And Conrad comes not, came not since that day

Nor trace, nor tidings of his doom declare

Where lives his grief, or perished his despair”

Born in 1788, Byron was one of the most extreme and flamboyant of the Romantic poets, in both his writing and lifestyle. The Corsair was written at a tumultuous time in his life. His early works had been critically slated, but from 1812 he was becoming increasingly popular. He had recently been involved in a scandalous affair with Lady Caroline Lamb, while also rumoured to be the father of his half sister’s third child. The Corsair reflects much of the poet’s life. As he said himself, it was written “con amore, and much from existence.” The protagonist finds himself embroiled in a confusing relationship, the loving wife who longs for him to settle down into domesticity, and the temptation presented by Gulnare. Most pertinently Conrad has a moral code, however alien it may seem. Byron presented a window onto his own life, the temptations he found himself surrounded by and struggling to control. He often seemed to live a life with no consequence, but The Corsair at least provides an insight into his inner turmoil. The popularity of his works also reveal a great deal about the society in which he lived, one in the early stages of industrialisation, just before the advent of rigid Victorian values. For all the legendary eccentricities, controversies and debaucheries that surround Byron’s life, the continued fascination with the man says a lot. He was a one person topic for conversation. His writings were popular but he was also a source for gossip, a personality that was, and for many people still is, just as important as his art. In many ways one could argue he was the prototype of the modern celebrity – a fame brewed from 50% art and 50% the artists own character. The brooding, gloomy Corsair reveals to us another side of this larger than life writer. Related Books