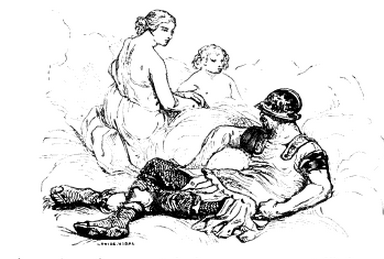 Homer’s Odyssey: A Tale of Twists and Turns

th or 8th century B.C.E, he was revered as one of the formative influences of Greek culture, and he was blind. It has been suggested that the Odyssey may have been a compilation of work from a group of writers rather just Homer, another mystery that adds to the poems intrigue. The setting is the twelfth century B.C.E. in Mycenaean Greece. This dates it to the bronze age chronologically, although Ancient Greeks thought of it as more of a golden age, a time when Gods and heroes of great strength wandered the earth and engaged with humanity. This explains the story’s fantastical elements, Gods intervening in human affairs and supernatural beings wandering the earth. Whereas the Iliad focuses on the epic clash of two civilisations, the Odyssey is about human experience. It is the tale of one family. The trials and tribulations of a father’s journey home from war, and the struggles of his wife and son in his absence. The tale abandons a chronological narrative for an ambitious structure that starts midway through the action and uses flashbacks and recollections to unfold the complex plot. More than just a supernatural adventure story, the epic engages with complex themes and ambiguous morality. Odysseus means ‘trouble’, referring to both the hardships the protagonist encounters, but also the trouble he himself creates. This is a tale of cause and consequence rather than a man at the mercy of the Gods. The events of the decade long journey home are triggered by the Lesser Ajax raping a Trojan priestess, incurring the wrath of Athena. Odysseus and his men succumb to temptation on several occasions, and each time they suffer inevitable consequences. Similarly, the suitors of Penelope, Odysseus’ wife, receive an inevitable grim punishment upon his return. Another recurring motif throughout is the triumph of cunning over brute strength, an idea first engaged with in the Iliad’s Trojan Horse but continued and developed here. Homer’s version of Odysseus epic tale is just one recording of a story that has existed for thousands of year in various forms. The characters, from the Cyclops to the Sirens have become so ubiquitous that it’s easy to forget where they were first recorded. Reading Homer’s version of the story is a reminder of the crucial ground it broke for western literature. It also serves to highlight a sophisticated plot with complex, multifaceted characters that are intriguing even to a modern audience.

Eight Books of Homers Odyssey With Introduction, Commentary, and Vocabulary
For the Use of Schools by Homer Perrin