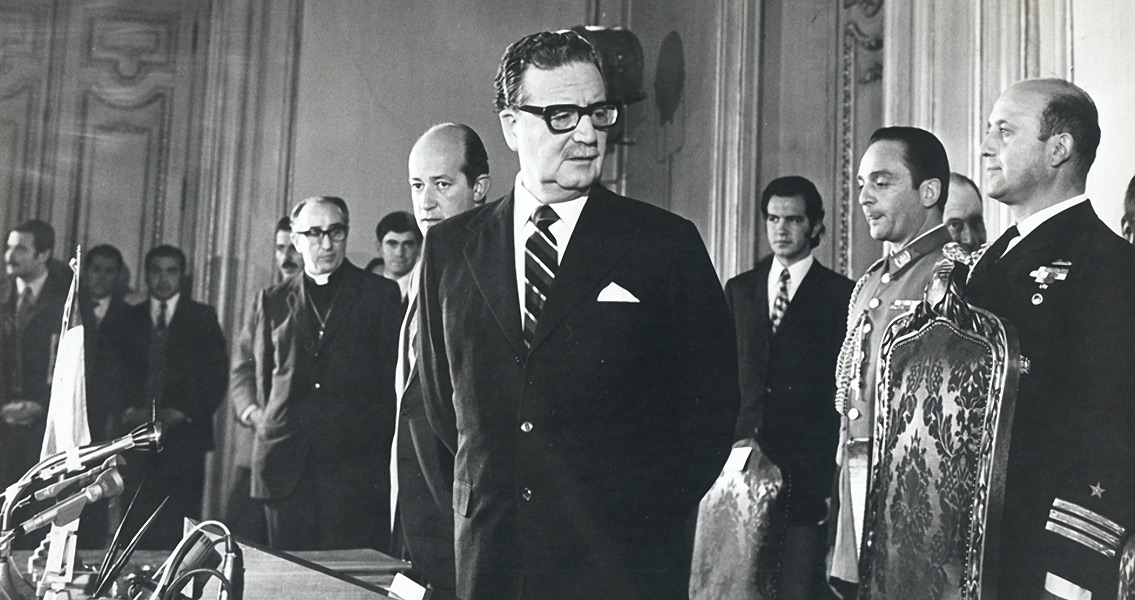 involved in South American politics. To this day, documents are still classified about what actions the White House sanctioned in Chile as a means to remove Allende. Although not actively leading the coup which removed Allende, it is increasingly apparent that the CIA did everything within its power to support resistance to Allende, and destabilise his government. Born into a middle class family in 1908 in Valparaíso, Chile, Allende studied medicine at university, where he also started to campaign as a marxist activist. In 1933 he helped found Chile’s Socialist Party, and four years later was elected to the country’s Chamber of Deputies for the first time. Over the next few years Allende’s political career flourished. From 1939 until 1942 he served as Chile’s health minister, while in 1945 he was elected to the Chilean senate for the first time. Prior to his 1970 election, Allende had run for the country’s presidency three times. His first attempt, in 1952, was blighted by his temporary expulsion from the Socialist Party, and he eventually came in fourth place in the contest. A second attempt, in 1958, was much more successful. Supported by both Chile’s Socialist and Communist parties, Allende finished a close second to the eventual winner, the Liberal-Conservative Jorge Alessandri. Allende’s third campaign, in the 1964 presidential election, marked the start of a major CIA initiative to prevent Socialism gaining power in Chile. The US intelligence agency underwrote more than half of the campaign of Allende’s main opponents, the Christian Democratic Party. Alongside funding the opposition, the CIA launched a propaganda campaign, using the press, radio, posters and films to denounce Socialism, and warn Chileans that a victory for Allende would lead to Soviet Union style brutality and dictatorship taking hold in Chile. Unsurprisingly, Allende’s opponent Eduardo Frei won the election comfortably. In 1970 the CIA again launched a massive campaign to aid Allende’s opponents and prevent him coming to power. This time the initiative proved less successful and Allende won 36% of the vote, placing him first out of the four candidates, although lacking a clear majority. Inaugurated on 3rd November, 1970, Allende soon set about reforming Chile’s society and economy along socialist lines. The Chilean government expropriated US owned copper mines in the country without offering any compensation. Nationalisation also extended to the country’s banks and other industries, while wages were increased by 40%, with businesses prohibited from increasing their prices. Over three years, these aggressive policies caused mounting controversy. Hyperinflation struck Chile, while accusations were made that Allende was circumventing the Chilean Congress, turning the country into the kind of autocracy seen in Cuba, or the Eastern Bloc of Europe. Considering Allende a dangerous force in South America, one accused of supporting more extremist political groups around the continent, the United States began to make attempts to destabilise his government. In 1970, President Richard Nixon had told his foreign secretary Henry Kissinger to facilitate a coup against Allende, a fact backed up by a CIA documented released several years later which claimed “It is firm and continuing policy that Allende be overthrown by a coup”. The United States attempted to set the conditions for an insurrection against Allende’s government in two ways, firstly by destabilising the country’s economy by cutting aid agreements, and secondly by actively looking for military leaders who could be persuaded to launch a coup. On 11th September, 1973, the US plan finally came to fruition. With the Chilean economy in crisis, a fact triggered by both internal and external factors, General Augusto Pinochet finally completed his coup, and Allende committed suicide to avoid capture. Although documents released since have revealed substantial US involvement in affairs in Chile in the early 1970s, the organisation was cleared of directly sponsoring Pinochet’s coup. Rather, the Church Committee investigation of 1975 concluded that they had created the conditions where Pinochet felt a coup could be successful. Democratically elected, Allende’s government was targeted by the United State’s for its socialist policies. Its successor, the dictatorship of Pinochet, was much more conservative, and allowed US investment back into Chile. It was also notorious for its brutal human rights violations. ]]>