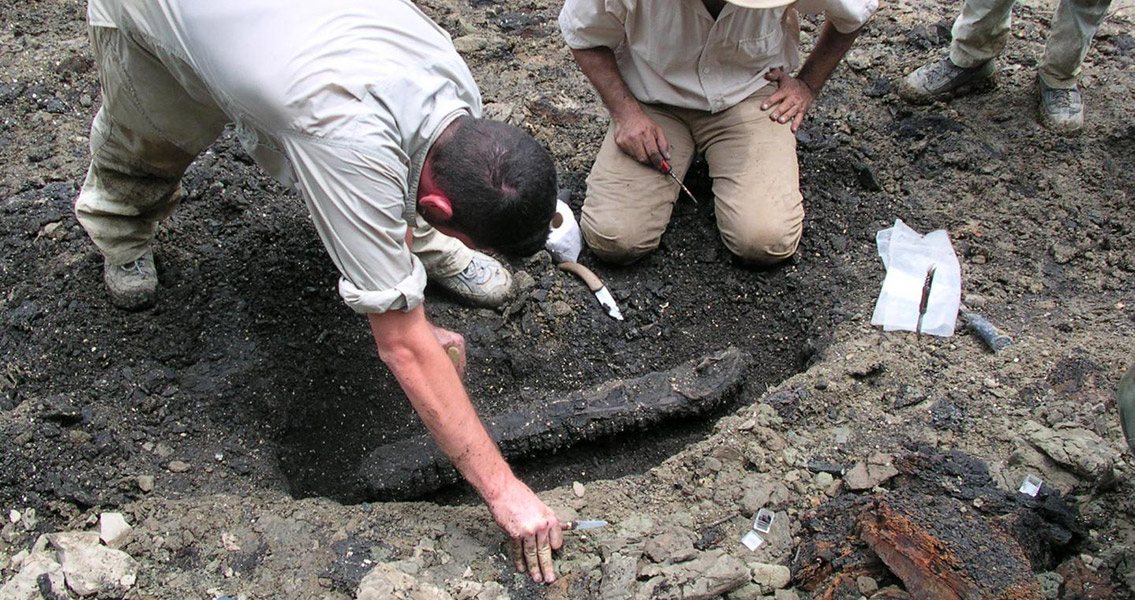 PLOS ONE. Despite living many thousands of miles away from each other, both South American and India gavialoids developed the same distinctive widely separated and protruding eyes. It is a mystery that has puzzled scientists for years, complicated by the fact that the fossil record for crocodylian evolution is far from complete. By analysing the fossilised remains of an extinct, 13 million year old crocodilian from the Amazon known as Gryposuchus pachakamue, the authors of the study believe they have solved the mystery surrounding the evolution of the Indian and South American gavialoids. Their conclusion is that the shared features were the result of parallel evolution. The study was performed by Rodolfo Salas-Gismondi from the University de Montpellier, France, with the assistance of his colleagues John J. Flynn, Patrice Baby, Julia V. Tejada-Lara, Julien Claude and Pierre-Olivier Antoine. Gavialoids are a diverse group of long snouted crocodilian species. Most members of the group have long since gone extinct, with the exception of Gavialis gangeticus, an Indian gharial which inhabits the northern river systems of the sub-continent and feasts on fish. Remains of the Gryposuchus pachakamue were excavated from a region of the Amazon in Peru. Salas-Gismondi’s team named the creature after Pachakamue, a Pre-Columbian storyteller god thought to have held secrets about the origins of life in South America. The name has proven surprisingly appropriate considering the insights the remains have revealed. Gryphosuchus pachakamue lived during the Middle Miocene, and is the oldest known South American gavialoid. The remains used in the study were found in the Pebas Formation, a region dominated by swampy waterways during the time the creature was alive, a fact which suggests G.pachakamue was a river dweller like later gavialoids. Significantly, the creature had telescoped eyes, although only slightly. After phylogenetic and morphometric analysis of the ‘storyteller’ crocodile, the team concluded it was the ancestor from which other South American gavialoids evolved their telescopic eyes. Significantly, this shows that the South American crocodiles developed their distinctive eyes in parallel with the Indian species. Such parallel evolution of course has precedent, most explicitly in the development of mammals on the earth’s different continents, which often evolved remarkably similar characteristics despite living thousands of miles from each other. It is a process which can clearly be seen in the likes of the European and the Tasmaninan wolf; and the European sabre-toothed tiger and the South American marsupial sabre-tooth. This parallel evolution is usually the result of creatures from similar lineages responding to similar challenges in similar ways. In the case of the gavialoids, it seems the progression to river dwelling necessitated their distinctive eyes, likely allowing them to hunt fish more effectively in these habitats. For more information: www.plos.org Image courtesy of D. De Francesci]]>