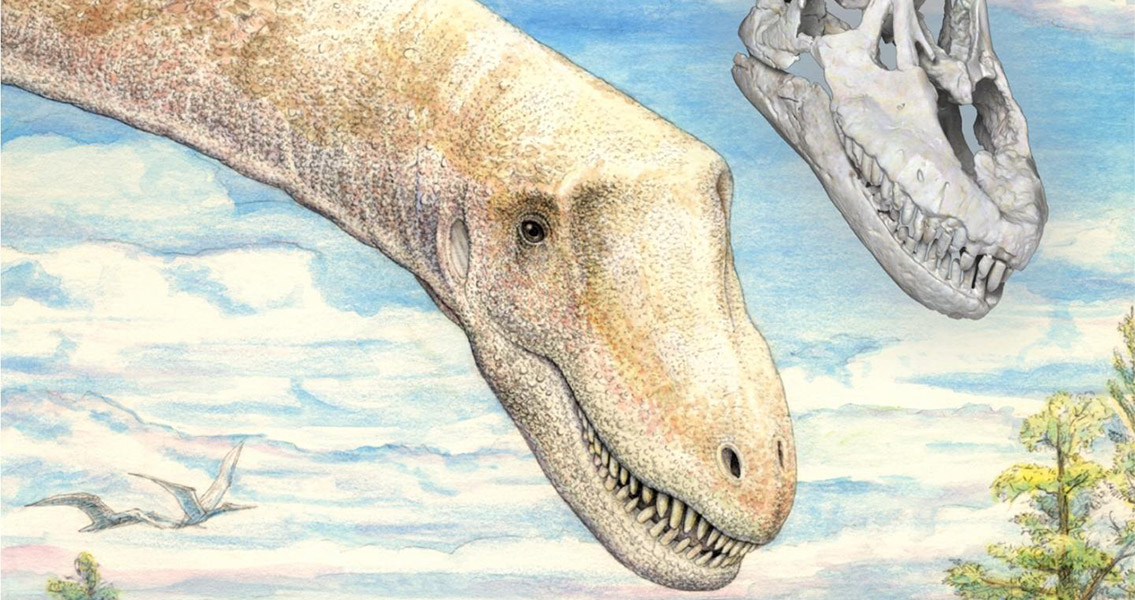 Sarmientosaurus Musacchioi. Based on a partial neck fossil and a complete skull discovered in Patagonia, it’s been determined to be a new Titanosaurian dinosaur – a kind of sauropod which ranged in size from that of a cow to the size of a large sperm whale. They were plant-eaters which had long tails and necks and might have been the most common of the large herbivores that roamed the landmasses of the Southern Hemisphere in the Cretaceous period. Despite their numbers, the skulls of these dinosaurs are exceedingly rare and critical to determining specific facts related to their biology. Only four semi-complete complete skulls out of the more than 60 known Titanosaurs have been found. Researchers associated with the latest discovery utilized computerized (CT) imaging to closely examine the anatomically primitive, well-preserved neck and skull fossils from Sarmientosaurus. Researchers discovered the Sarmientosaurus brain was small compared to its huge body, a typical trait of sauropods. But they also discovered evidence of higher sensory capabilities than almost all of the other sauropods. This suggests that Sarmientosaurus had bigger eyeballs and better vision, in addition to an inner ear which might have been better tuned for hearing airborne sounds at a low-frequency compared to other Titanosaurs. Additionally, the organ in the inner ear which affects balance suggests this dinosaur might have routinely held its head in such a manner that the snout faced downward. “Discoveries like Sarmientosaurus happen once in a lifetime,” study leader Rubén Martínez told PLOS One, “That’s why we studied the fossils so thoroughly, to learn as much about this amazing animal as we could.” There have been numerous dinosaur discoveries in Argentinian Patagonia, a few of the most outstanding have been: * Giganotosaurus Carolinii, discovered in 1993 and considered to be the world’s largest carnivore (13.5 m in length, 4.6 m tall at its hip, and 9,500 kg in weight. * Argentinosaurus Huinculensisis, the biggest herbivore found to date. (larger even than Carolinii). * Andesaurus Delgadoi was found in 1987, under several meters of water in Lake Exequiel Ramos Mejía. The discovery happened when the lake fell to its lowest recorded level due to a drought. Delgadoi was named after its discoverer, Alejandro Delgado. * Rebbachisaurus Tessonei is the most complete dinosaur specimen discovered in South America, and was found in 1988. Also a sauropod, this herbivorous dinosaur weighed around 10,000 kilos and measured 17 meters long. * Gasparinisaura Cincosaltensis, a herbivorous dinosaur which stands out for its small size, 1.50 meters, as well as it’s supposed graceful quick movement. Sarmientosaurus Musacchioi was named for the town of Sarmiento which is located in Chubut Province, close to the discovery site. The study has been published in PLOS ONE, an open-access scientific journal. Rubén Martínez, with UNPSJB, is the author of the study. Image courtesy of Mark A. Klingler, Carnegie Museum of Natural History and WitmerLab, Ohio University]]>