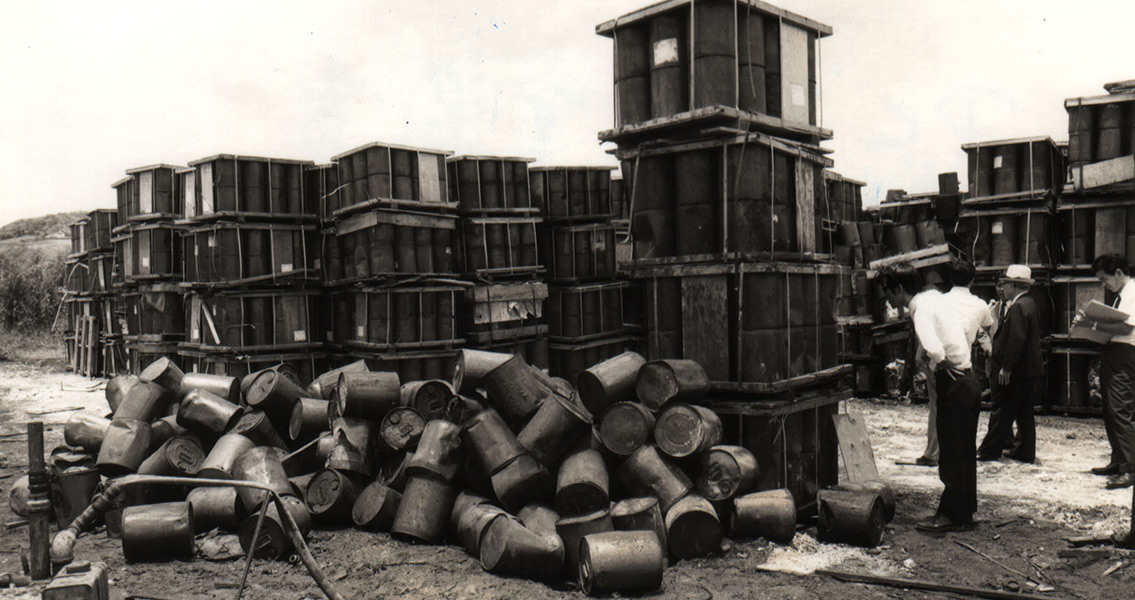 Environmental Health Perspectives. Organochlorine chemicals, used in pesticides and insulating material, were banned in 1977. The dangerous compounds were thought to have been confined to history; but the recently published study suggests that they might still be haunting us in the form of a link between higher levels of exposure to the chemicals during pregnancy and an increased risk of autism spectrum disorder in children. The results suggest that children born after being exposed to the highest levels of certain compounds of the chemicals during their mother’s pregnancy were 80% more likely to be diagnosed with autism compared to those who had only been exposed to the very lowest levels of these chemicals. Despite the 1977 US ban on organochlorine chemicals, such as DDT, the compounds remain in the envrionment. Human exposure to the chemicals comes when they are absorbed into animals whose meat make up part of our diet. “There’s a fair amount of research examining exposure to these chemicals during pregnancy in association with other outcomes, like birth weight — but little research on autism, specifically,” said Kristen Lyall, ScD, assistant professor in Drexel University’s A.J. Drexel Autism Institute and the lead author of the study; in a Drexel University press release. “To examine the role of environmental exposures in risk of autism, it is important that samples are collected during time frames with evidence for susceptibility for autism — termed ‘critical windows’ in neurodevelopment. Fetal development is one of those critical windows.” Two different classes of organochlorine chemicals formed the basis of the study: olychlorinated biphenyls (PCBs, which were used as lubricants, coolants and insulators in consumer and electrical products) and organochlorine pesticides (OCPs, which include chemicals like DDT). Rachel Carson’s 1962 book, Silent Spring, documented the detrimental effects pesticides such as DDT had on the environment. It was a watershed moment in the history of environmentalism in the USA, challenging the disinformation propagated by chemical companies and ultimately leading to the ban on DDT and other organochlorines. Lyall and colleagues’ work however, has shown the long term impact of the historical use of these chemicals. “Exposure to PCBs and OCPs is ubiquitous,” said Lyall. “Work from the National Health and Nutrition Examination Survey, which includes pregnant women, shows that people in the U.S. generally still have measurable levels of these chemicals in their bodies.” For the test, participants from a population sample of 1,144 children born in Southern California between 2000 and 2003, were divided into three groups: 545 who were diagnosed with autism spectrum disorder, 181 with intellectual disabilities but no autism diagnosis, and 418 with a diagnosis of neither. Blood tests taken from the second trimester of the mother’s pregnancy were then used to determine the level of exposure to PCBs and OCPs. Lyall stressed that the level of exposure was key in determining risk. “Adverse effects are related to levels of exposure, not just presence or absence of detectable levels,” she said. “In our Southern California study population, we found evidence for modestly increased risk for individuals in the highest 25th percentile of exposure to some of these chemicals.” The consequences of the chemicals were not restricted to autism; the highest exposure to PCBs seemed to double the risk of a child being diagnosed with intellectual disabilities when compared with the cases of the lowest exposure. “The results suggest that prenatal exposure to these chemicals above a certain level may influence neurodevelopment in adverse ways,” Lyall said. The team plan to continue their work, to gain more of an understanding of how chemicals banned decades ago continue to haunt us in the present. “We are definitely doing more research to build on this — including work examining genetics, as well as mixtures of chemicals,” Lyall said. “This investigation draws from a rich dataset and we need more studies like this in autism research.” The full study is available here ]]>