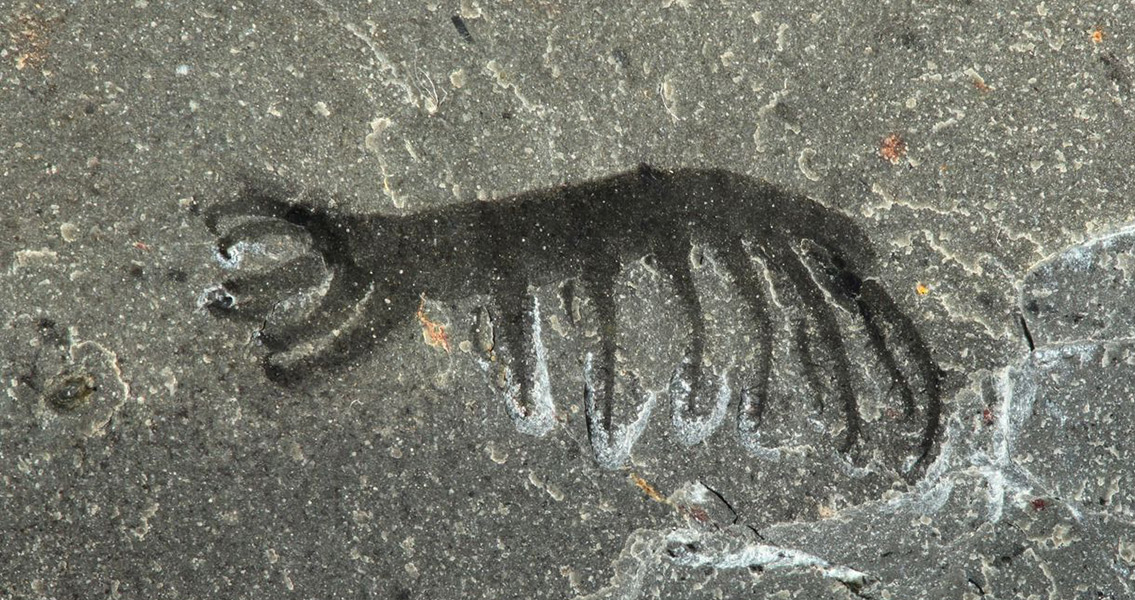 Ovatiovermis cribratus, a 500-million-year-old worm no bigger than a thumb and with leg-like appendages, has recently been identified as a new species. The fossil specimen resembles a flattened shrimp, but the tiny creature, a distant relative of arthropods and tardigrades, hung around in North America’s shallow seas eons before shrimp existed. Evolutionary biologists based their approximation of the worm-like creature on two fossils, the first discovered decades ago and a second which was found by a tourist in 2011 visiting the Burgess Shale. The Burgess Shale Formation, where both specimens were found, is a UNESCO World Heritage site known for its extraordinary deposit of marine fossils. The Formation, a former seafloor, is found in the Canadian Rockies of British Columbia and boasts more than just exoskeletons and bones. It’s also known for the exceptional preservation of the soft tissues of the fossils there. At 508 million years old, Burgess is one of the earliest fossil beds known to contain soft-part imprints. The rock formation is black shale and is visible at several locations near the city of Field, B.C., in Yoho National Park and Kicking Horse Pass – a high mountain pass on the border of Alberta and British Columbia. Another outcrop is located 42 km south, in Kootenay National Park. The Burgess Shale was discovered in 1909 by Charles Walcott, a paleontologist. He returned with his family in 1910 and established a quarry at Fossil Ridge. The importance of soft-bodied preservation, and the wide range of organisms Walcott recognized as being new to science, caused him to return to the site numerous times until 1924. By 1924, at age 74, Walcott had collected more than 65,000 specimens. The name, Ovatiovermis cribratus, stems from how researchers believe the creature fed. Ovatiovermis because it’s thought the creature stood up on the seafloor, in an ongoing standing ovation of sorts, and cribratus in reference to the way it may have sieved passing water in order to collect food. Lobopodians (meaning “blunt feet” in Greek) are worm-like organisms with stubby legs. “Lobopodians have mostly been seen so far as an eclectic group. We think that suspension feeding was common among them and turned out to be important in the initial ‘burst’ of that colossal group that gave rise to water bears, velvet worms and arthropods,” Cédric Aria, a co-author of the recently published study, said in a statement. Other animals, the skeleton shrimp for example, have comparable eating patterns. The Burgess Shale Formation and its fossil-carrying deposits correlate to the Stephen formation, a collection of dark mudstones approximately 508 million years old. The beds holding the fossils were deposited at the bottom of a cliff that was around 160 meters tall, deep enough to be below the agitation caused by waves during a storm. Originally it was believed the Burgess Shale was set down in anoxic conditions, ongoing research, however, suggests oxygen was present on a continual basis. Ovatiovermis cribratus was identified in an article recently published in BMC Evolutionary Biology. Photo courtesy of Jean-Bernard Caron—Royal Ontario Museum ]]>