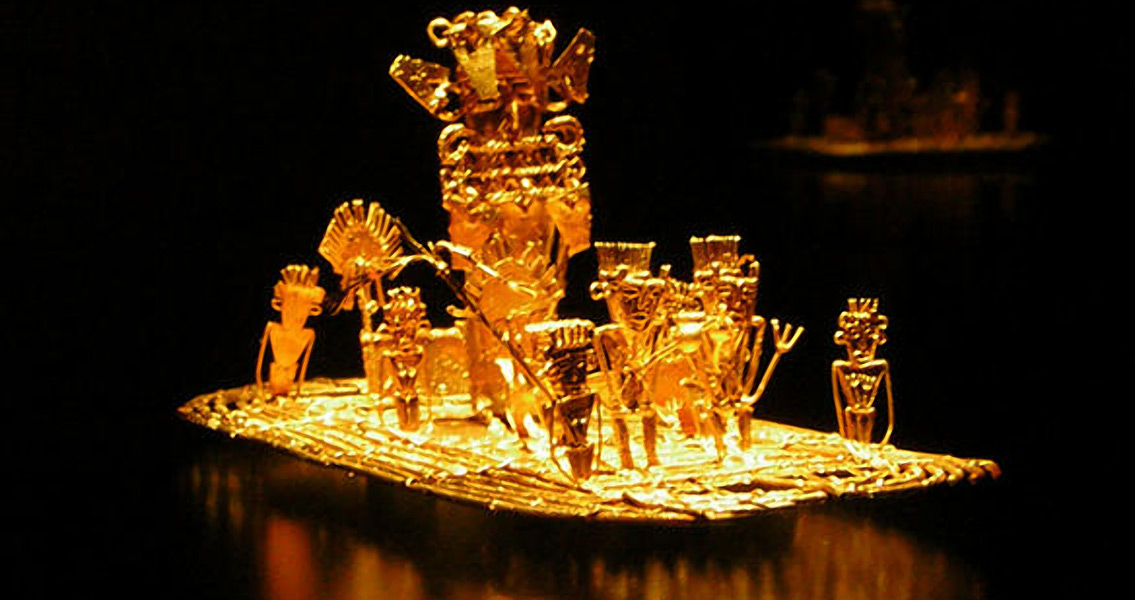 El Dorado – Between Truth and Legend

Where Did the El Dorado Myth Come from? As soon as the first Conquistadors ventured into South America in the sixteenth century they started to hear myths of an indigenous tribe with fantastic wealth. One myth in particular captured their imaginations – that of the Muisca tribe hidden high up in the Andes Mountains. Stories said that when a new Muisca chieftain came to power his body was covered in gold dust while jewels were thrown into nearby Lake Guatavita as a sacrifice to a local god or deity. Initially, El Dorado didn’t refer to a city. Meaning ‘The Golden One’, it was the name the Spanish gave to the gold adorned leader of the mysterious Muisca tribe. The elaborate ritual had supposedly ended in the fifteenth century before the Spanish arrived, when ‘The Golden One’ and his followers were attacked by a neighbouring tribe. Nevertheless, due to the sheer amount of gold European settlers found among the indigenous tribes along the northern coast of South America, explorers were convinced there must be a place of great wealth somewhere within the continent’s interior. Draining Lake Guatavita In the 1540s Conquistadors finally entered what is now the Bogota Valley, and by 1545 had subjugated the Muisca tribe. As they began communicating with village elders, the Conquistadors soon realised that nearby Guatavita was the lake from the El Dorado legends. Desperate for gold to keep funding their exploration and exploitation of the New World, the Spanish colonisers became desperate to extract the riches from the lake. Chains of Muisca were forced to scoop out the lake’s water with clay pots, in the hopes that riches would be found in the water. Several decades later, a team of 8,000 labourers were employed to dig a hole in the crater rim housing the lake. Twenty metres of water were drained, revealing golden trinkets and other jewels in the mud. Before the lake could be completely emptied disaster struck, the hole collapsed and hundreds were killed. Exactly how much gold was taken from the muddy banks of Lake Guatavita is unclear, but sources suggest that it was not enough to fund the enormous expense of attempting to drain the lake. The Myth Expands From its beginnings, the myth grew and became increasingly elaborate as it was passed down and adapted through the generations, to the point Conquistadors began searching for a lost city of gold. In the seventeenth century, English explorer Sir Walter Rayleigh launched two expeditions for El Dorado. The second, headed by his son Watt, proved tragic. Exploring the Orinoco River, the team failed to find any sign of the city of gold. To make it worse, they came into a disasterous conflict with Spanish explorers. Watt was killed in the fighting. Heartbroken by his son’s death, Sir Walter returned to England where the disaster escalated. English explorers in the New World had been explicitly ordered to avoid conflict with the Spanish due to the delicate diplomatic situation between the two empires. Sir Walter Rayleigh’s actions were seen as dangerously reckless, and he was executed on the orders of King James. The Truth Behind the Myth There is likely no city of gold hidden in the depths of South America, yet archaeologists have found there is some basis to the initial myth of ‘The Golden One’. Research has shown that the extent and quality of gold production in the area around what is now Colombia was truly remarkable by the late sixteenth century. The Muisca were most definitely a real tribe, and archaeological and anthropological analysis has shown that gold was a central part of their culture. Crucially however, this gold was not a symbol of wealth, it was used purely as a religious offering. As Roberto Lleras Perez, an archaeologist and expert on Muisca gold told the BBC in 2013. “No other society, as far as I know, dedicated over 50% of their production for votive offerings. I think it is quite unique,”. In 1969, villagers found a golden raft in a cave in the hills south of Bogota. It depicted a scene exactly like that described in the myths of Lake Guatavita, adding further credence to the stories of ‘The Golden One’. El Dorado as a place might have been nothing more than a product of the European explorers’ imagination and their thirst for wealth in the New World, but the sacred Muisca rituals behind the myth certainly were real. ]]>