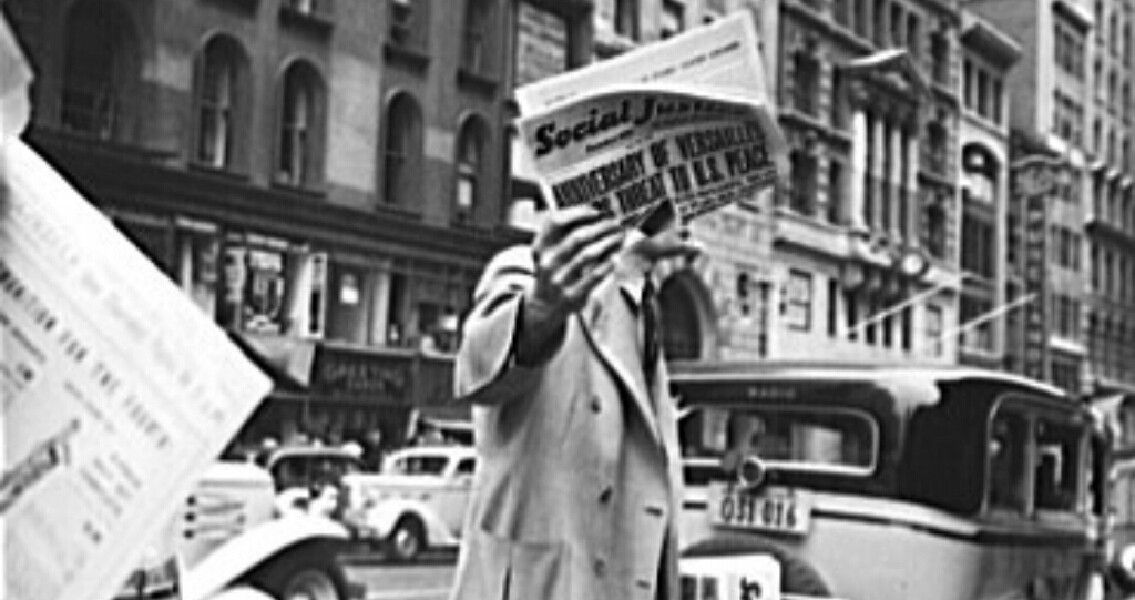 How do you define fascism? Like any political ideology, it is difficult to define fascism convincingly; debates over definition clouded by historical examples serving as inescapable archetypes. The Oxford Dictionary defines fascism as: “a political philosophy, movement, or regime (as that of the Fascisti) that exalts nation and often race above the individual and that stands for a centralized autocratic government headed by a dictatorial leader, severe economic and social regimentation, and forcible suppression of opposition.” Taking this as a basis, elements of fascism have been seen throughout US history, and in particular in the 1930s. Fascism Versus the New Deal Fascism took hold in Europe in the wake of economic calamity. In the USA, the response to the Great Depression was the election of Franklin D. Roosevelt to the presidency and the implementation of the New Deal – a program of government investment, extension of federal authority and welfare spending designed to stabilise the US economy. Roosevelt was elected president four times, but his liberal politics were far from universally popular. Like Europe, there were those in the US who felt fascism was the only way forward. Father Charles Coughlin Eleven days after the Kristallnacht massacre of Jews in Germany, Michigan based Catholic priest Father Charles Coughlin took to the airwaves in defence of the Nazis’ actions. A swift backlash ensued against Coughlin, culminating in New York radio station WMCA cancelling his show. Nevertheless, Coughlin continued broadcasting from his Michigan church. Father Coughlin associated Judaism with Russian Communism. To him, the actions of the Nazis, including their blatant antisemitism, were a means to fight off Communists. Speaking to a reporter in the late 1930s about the path of politics in the USA, Coughlin said: “I take the road of fascism”. A few years earlier the charismatic priest had formed his own political party, and even made a run for the White House. In 1933 the radio stations carrying Coughlin’s broadcasts had a potential audience of some 40 million people. Rallying against internationalism, bankers and Jews, Coughlin started a new political organisation in 1934, the National Union for Social Justice. Two years later, the party had a candidate in the presidential election. At a rally in Rhode Island, Coughlin declared, “I shall have the courage to stand up and advocate the use of bullets”, promising “more bullet holes in the White House than you could count with an adding machine.” Coughlin’s candidate, William Lemke, suffered an embarrassing defeat by winning just nine hundred thousand votes. Combined with the backlash against his post Kristallnacht broadcast, Coughlin was increasingly pushed into retiring from public life. The German American Bund Father Coughlin wasn’t alone in backing Hitler and the Nazis. Supporters of the German American Bund remained loyal to the Nazis throughout the Great Depression, and into the 1940s. The German American Bund was essentially an organisation of ethnic Germans living in the USA. Its support of Nazism stretched to antisemitism, anti-communism, and an insistence that the USA should remain neutral in the Second World War. German American Bund leader Fritz Kuhn was regarded as the leading antisemite in the USA. His organisation carried out a range of activities around the USA, publishing books and magazines, organising rallies, even maintaining youth organisations similar to the Hitler Youth in Germany. Kuhn was ultimately imprisoned for embezzling funds, while other leaders of the group were arrested as the USA headed towards war with Germany. With support waning, the organisation was eventually banned after the USA entered the fray of World War Two. Father Charles Coughlin and the German American Bund are two American Fascist movements that existed in the run up to the Second World War. There were others, such as the Black Legion; a Ku Klux Klan splinter group which indulged in acts of terrorism and vigilantism, but what makes the German American Bund and Father Coughlin so shocking is the level of public respectability their representatives and their ideas seemed to win. Fascist governments never took hold in the USA in the twentieth century like they did in Spain, Italy, Germany and elsewhere in Europe. However, that doesn’t mean that fascism hasn’t left its mark on US history. ]]>