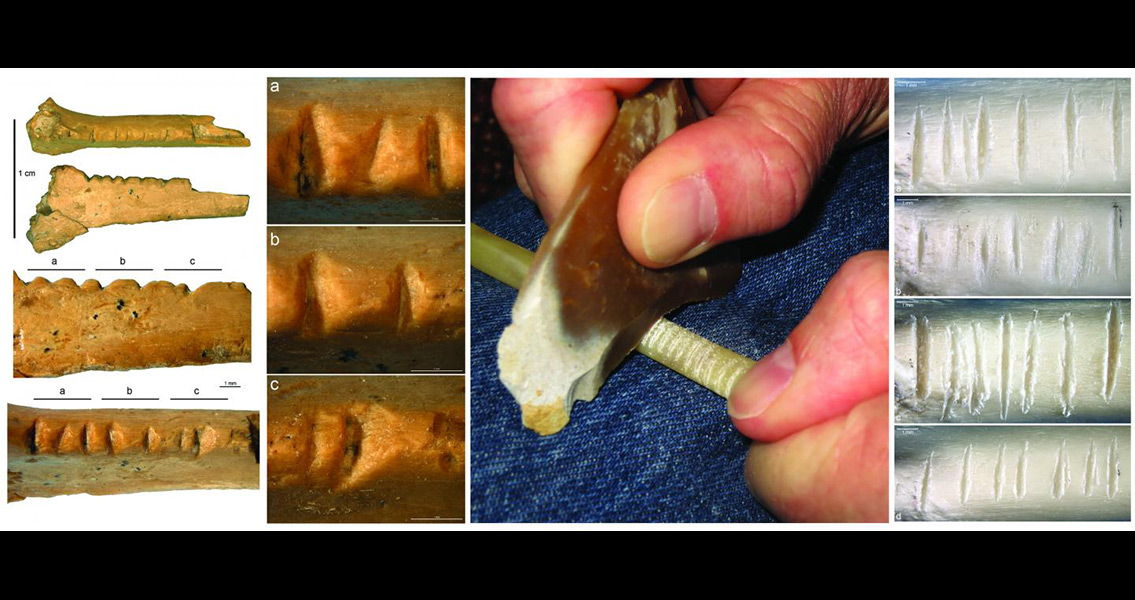 Neanderthals Made Patterns on Raven Bones

PLOS ONE. If the notches on the raven bone were indeed made intentionally by a Neanderthal, it would suggest a much higher level of cognitive ability among our closest extinct evolutionary cousins than is typically assumed. Majkic and her team carried out a range of tests to determine whether two extra notches on the ZSK raven bone had been made by Neanderthals with the intention of making the final series of notches appear evenly spaced. Interestingly, these tests involved using modern day volunteers as a means of assessing the aesthetic intention behind the notches. The researchers carried out a multi-phase experiment involving turkey bones of a similar size to the raven bone unearthed in Crimea. Participants were asked to create evenly spaced notches in the bones, and these bones were then subjected to morphometric analysis. The analyses revealed that the equal spacing of the notches in the modern day test were comparable to those in the ZSK raven bone, even when they were adjusted for errors in human perception. For the researchers, this similarity is deeply significant. As they write in the abstract to their study: “This suggests that even if the production of the notches may have had a utilitarian reason the notches were made with the goal of producing a visually consistent pattern. This object represents the first instance of a bird bone from a Neanderthal site bearing modifications that cannot be explained as the result of butchery activities and for which a symbolic argument can be built on direct rather than circumstantial evidence.” Popular culture tends to portray Neanderthals as primitive when compared to modern humans. The reality however, is far more complicated. The idea of the brutish, uncultured Neanderthal is increasingly being challenged as new discoveries fuel debate over their cognition. Some scientists go as far as claiming Neanderthal cognition would have been comparable, perhaps even equal, to modern humans’. Others say that factors such as differences in cranial morphology and evidence of behaviour suggest vast differences between human and Neanderthal cognitive levels. Recent discoveries of altered bones at Neanderthal sites have been described by some as proof that Neanderthals had a taste for personal ornamentation. Earlier this year, a study claimed to have found evidence that Neanderthals used plant based medicine, pointing to a high level of intellectual development and awareness of their surroundings. Perhaps most unusually, a strange looking piece of limestone found at a site in Croatia was taken as an example of Neanderthals’ sense for aesthetics. The researchers who discovered the rock believe it could have served no practical function, and therefore may have been kept by a Neanderthal purely for the way it looked. Image courtesy of Francesco d’Errico]]>