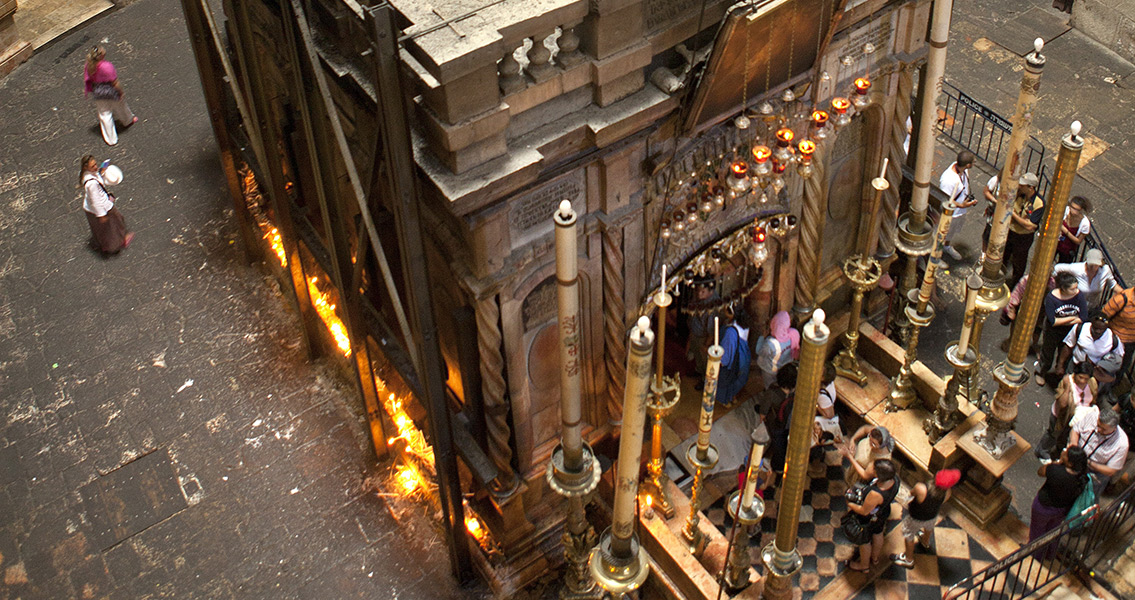 Church of the Holy Sepulchre at Risk of Collapse

National Geographic, the Edicule housed within the Sepulchre and thought by the faithful to be the final resting place of Jesus Christ, is at “very real risk” of collapse because of the church’s crumbling foundation. To make matters worse, the Edicule itself rests on a mix of rubble, mortar, and warren-like passageways and tunnels, all of which have compromised the integrity of the ground beneath it. Ironically, the discovery of the damaged floor was made during a $4 million project to restore and renovate the church itself to protect it for future generations of visitors. In some cases, more than four feet of unconsolidated rubble lie beneath the floor, which is doing its best to support the stone pillars that in turn hold the rotunda of the Church’s roof above the Edicule; each of these pillars is thought to weigh more than 20 tons. NTUA’s chief scientific supervisor Antonia Moropoulou spoke in dire terms of the foundation of the Edicule failing. Saying it’s a matter of when, not if, it occurs, Moropoulou remarked that the process will be slow but catastrophic. Such an event is unlikely to occur, however, considering the deep religious significance of the church to the world’s Christians. A newly-proposed project, drafted by the NTUA, calls for a $6.5 million excavation to shore up the foundation, which would take nearly a year and involve replacing rotted mortar and ancient rainwater and sewage drain systems around the holy site. The history of the site itself is inextricably tied with the state of the Edicule’s foundation, researchers say. In the time of Christ, the site was likely an old limestone quarry that had been repurposed as a burial ground for influential Israelites. Additional tombs discovered on the grounds lend credence to this theory. During the Roman occupation of Judea, a temple was built over the site sometime after it had become the supposed resting place of Christ. This temple was razed to the ground in 324 CE, revealing what the first Christian Emperor assumed to be the tomb of Jesus. Constantine built a shrine around the tomb, which stood until the seventh century CE when Persian invaders partially destroyed it. It was again razed by the Fatimids in the early eleventh century before being rebuilt once again. Periods of rebuilding punctuated the site’s history after this, from attempts by Europeans during the Crusades to later reconstruction efforts in the sixteenth and nineteenth centuries. Many of these construction phases are encompassed by the Church’s existing edifice. The dome of the rotunda, held up by those massive pillars on the Edicule’s crumbling foundation, is thought to mark the foundation of the original shrine erected by Constantine. Researchers hope that the new restoration work will provide opportunities for archaeologists to learn more about the church and its shrine, though there are fears that the cadre of religious authorities that oversee the site will not permit the activity. ]]>