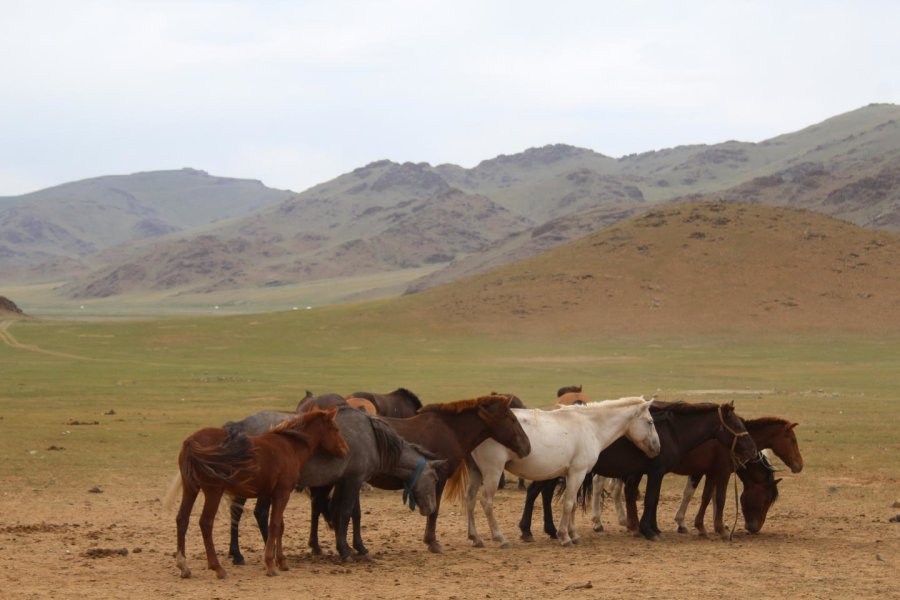 Not Western after all: veterinary science originates from Mongolia

Max Planck Institute for the Science of Human History. A team of scholars, led by William Taylor of the Institute, have analysed ancient horse remains from a Mongolian pastoral culture called the Deer Stone-Khirigsuur Culture. Crucially. their findings challenge the traditional view that veterinary care is a Western science.

Who were the people of the Deer Stone-Khirigsuur Culture?

This pastoral culture roamed the steppes of Mongolia and the eastern parts of Eurasia between 1300 and 700 BC. The nomadic tribe carved beautiful standing stones, known as deer stones, and created burial mounds, or khirigsuurs, across the Mongolian Steppe. As peaceful horsemen, they have been linked to some of the oldest evidence for nomadic herding and the keeping of domestic livestock in that part of the world. [caption id="attachment_8781" align="aligncenter" width="500"]

Horses congregate near a deer stone site in Bayankhongor, in central Mongolia’s Khangai mountains.
Credit: William Taylor[/caption] They were the first peoples in eastern Eurasia to utilise horses as livestock, and it has been suggested that they were among the first to ride the animals. At roughly the same time as their inhabitancy, bronze and metal mouthpieces for riding spread throughout the region. These would have given riders more nuanced control over the animals, enabling them to use them for new purposes – including warfare. However, using metal to control horses also saw the rise of new oral issues, including painful interactions with a vestigial tooth that develops in some animals, known as a ‘wolf tooth’. A common problem among the horses, ‘wolf tooth’ would have been alleviated by the use of blunt metal instruments. The practice remains in a similar form today. This dentistry care would have allowed the early riders to control their horses, and further use them to advance their own society. Near each deer stone and khirigsuur, stone mounds symbolise the ritual burials of domestic horses. To contextualise the scale of this culture, the number of horses buried can run up into the hundreds, or even thousands. [caption id="attachment_8782" align="aligncenter" width="500"]

A depiction of the classic Mongolian style of deer stone. Credit: Kyarrakun, via Wikimedia Commons[/caption]

A careful study of the skeletal remains found in these burials has exposed never-before-known information about early veterinary dental procedures. The Deer-Stone Khirigsuur people would have removed any baby teeth causing pain in young horses – making them the world’s oldest known practitioners of veterinary dental care. Throughout the study, Taylor worked closely with colleagues from the National Museum of Mongolia. Jamsranjav Bayarsaikhan and Tumurbaatar Tuvshinjargal were able to provide him with deeper insight about the development of horseback riding and how a horse-based pastoral economy facilitates scientific advancement. “We may think of veterinary care as kind of a Western science,” Taylor comments. “But herders in Mongolia today practice relatively sophisticated procedures using very simple equipment. This results of our study show that a careful understanding of horse anatomy and a tradition of care was first developed, not in the sedentary civilizations of China or the Mediterranean, but centuries earlier, among the nomadic people whose livelihood depended on the well-being of their horses.”

Nicole Boivin, Director of the Department of Archaeology at the Max Planck Institute for the Science of Human History, concludes: “In many ways, the movements of horses and horse-mounted peoples during the first millennium BCE reshaped the cultural and biological landscapes of Eurasia. “Dr. Taylor’s study shows that veterinary dentistry – developed by Inner Asian herders – may have been a key factor that helped to stimulate the spread of people, ideas, and organisms between East and West.” The research has been published in full here.]]>
Tags: animalsmongoliaveterinary science
Share 0
Tweet
Share
Share
Share