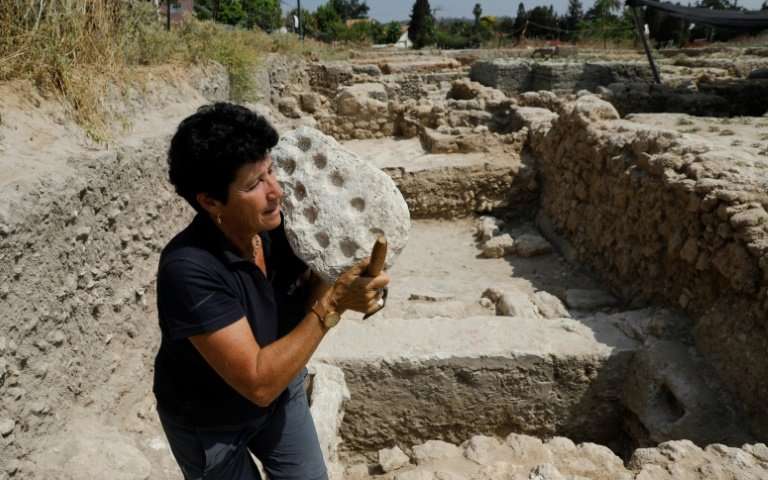 Family wine businesses During the periods the factory was in use, wine was a major Israeli export. The main function of the jars was of course for the storage and shipment of wine, which was a flourishing industry employing a great number of local people. The remains of around 100,000 jars found buried at the site are thought to have been rejects discarded from the production line. The Israeli Antiquities Authority said in a statement: “The continuous production of these jars probably indicates that the business was a family one, which passed from generation, to generation, to generation.” [caption id="attachment_8870" align="aligncenter" width="500"]

The excavation, funded by the Israel Land Authority, was carried out by the Israel Antiquities Authority with the participation of many youth, prior to the construction of a new neighbourhood in Gedera, next to the ancient Tel Qatra. The industrial site comprised a pottery workshop that manufactured storage jars from the third century CE for six centuries. Credit: MENAHEM KAHANA / AFP[/caption]

The excavation site is not far from the town of Gedera, south of Tel Aviv. Gaza City lies about 30 miles (48 kilometres) southwest of Gedera, on the Mediterranean coast. During its long history, Gaza has been ruled by the Romans, Byzantines, Crusaders, Mamluks and Ottomans. Director of the excavation Alla Nagorsky told journalists at the site that from the 3rd Century AD, the planet produced vessels of a type known to historians as Gaza jars continuously for 600 years.

Much more than just wine jars, the archaeologists have discovered a factory, an adjacent leisure complex, 20 bathing pools and a room that was used for board games. Alongside the factory were two Byzantine style bathhouses. At least one of them had a heating boiler. The 20 ‘finely constructed’ pools were connected by channels and pipes. “This kind of a place is not built in an instant,” Alla Nagorsky said. “An engineer worked on it. The site is very designed.” “The archaeologists consider that the water complex served both the local population and the many travellers along the ancient main road connecting the port of Gaza with the centre of the country,” the IAA said in its statement.

The games room, in particular, was a shock find, with the IAA calling it a ‘rare and surprising discovery’. In it were boards used for playing backgammon and “mancala”, games which are still popular in the area. The statement said the Gedera pottery works may have built the leisure centre for its employees, just as today’s tech and start up companies provide recreation facilities for their workers. [caption id="attachment_8871" align="aligncenter" width="500"]