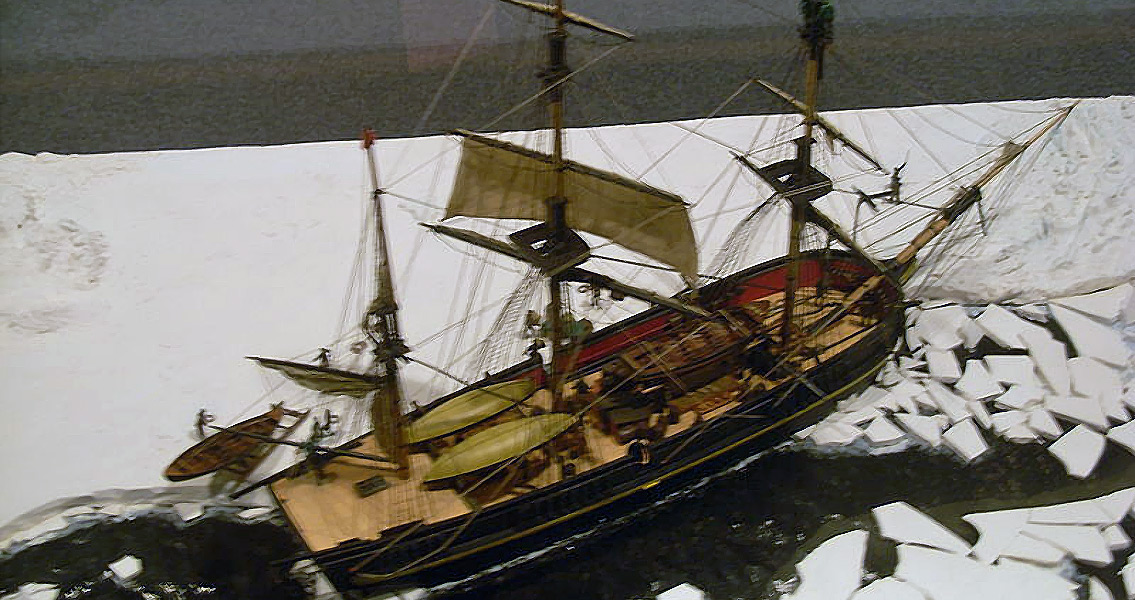 HMS Erebus, which sank in 1846, have been recovered to the surface. This is the second major discovery after the location of the ship itself, which only happened last year. The Erebus was one of two ships that carried Sir John Franklin’s expedition to the Arctic to find a Northwest Passage. The Erebus and its sister ship, the HMS Terror, became stranded in ice near the shores of King William island in the Queen Maud Gulf off the coast of Canada a year after they had left Britain. Both ships eventually sank, with 128 people dying. Franklin himself died on the island a year later, in 1847. The wreck site is at a very remote and climatically hostile location. After the Erebus’ remains were discovered in 2014, the divers sent to examine them had a difficult time, to put it mildly: just to reach the wreck they had to overcome sea ice with a thickness of two metres. The work on the ship was led by underwater archaeologist Ryan Harris, from the Parks Canada Agency, who told LiveScience that just getting all the equipment and professionals needed for the job to the Queen Maud Gulf had been a challenging task. Thankfully, the team could count on logistics support from several government agencies, including the Department of National Defense, the Canadian Royal Navy, and the New York Air National Guard. The first divers went underwater last September and cleared the kelp and other marine flora colonies on the ship, which rests five meters from the seafloor. This April, the divers returned to scan the site with lasers to catalogue what was there. It was during this diving session that they retrieved the artefacts that have now been put on display at the Canadian Museum of History. The objects include three plates, some buttons, a bottle of medicine still holding some of its contents, pieces from the ship’s rigging, and a huge, 300-kg canon. According to Harris, the two ships must have sailed under “a flag of scientific neutrality” but nevertheless thought it wise to be prepared for any eventuality. All of these, however, are nothing but scratching the surface, LiveScience writer Stephanie Pappas notes. There is a huge amount of work yet to be done on the ship’s remains if there is any hope of identifying at least some of the victims of the wreck, establishing what they were doing in those last days, and determining whether they died on the ship or elsewhere. The buttons could be some help, as they may tell the researchers the rank of their owner. The team also hope to find out what caused the wreck or what factors contributed to it, given that both ships were equipped for sailing in the ice-packed Arctic waters. The Erebus wreck features ice channels on the port side, as well as metal plating and a system allowing the propeller to be hoisted onto the deck. The whereabouts of the second ship in the expedition, the Terror, remains unknown. Image courtesy of Wikimedia Commons user: Piotrus]]>