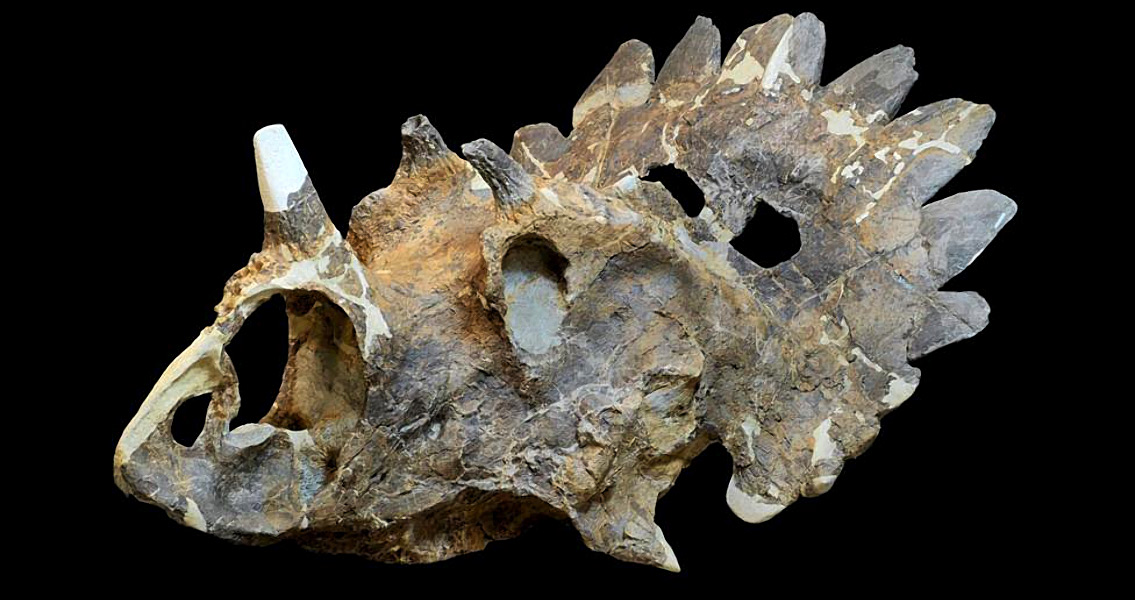 regaliceratops peterhewsi, the new species is is indeed related to the triceratops but represents an evolutionary convergence between the more well-known dinosaur species and older, less-developed species that preceded it; the most noteworthy physical manifestation of this legacy is the crown-like frill regaliceratops sports on the back of its skull. The fossil was originally discovered in 2005 by Peter Hews, a geologist from Calgary, when he was surveying a cliff in southwestern Alberta that ran alongside the Oldman River. Hews contacted the Royal Tyrell Museum – the same museum New Historian reported being shipped another paleontological find of five fossilized fish discovered in a Calgary basement last week – and researchers excavated the fossil. After years of study and analysis, the new species, which was named in honor of Hews to commemorate his discovery, is now on display at the museum. The process for extricating the fossilized skull was a painstaking one, thanks to the presence of bull trout in the river below. As a protected species in Canada, the fish had to be provided specific protections by the excavation team, including preventing any dirt or debris from the excavation from falling in the river. Taken together with the extremely hard rock within which the fossilized bones were encased, the museum teams found the entire experience “hellish,” according to paleontologist Caleb Brown in an interview with CTV News. The extreme difficulty of the dig, combined with the unique nature of the small, almost stunted-looking horns located over the eye sockets that carry a close resemblance to a certain otherworldly science-fiction and comic book character, led to the dinosaur being nicknamed “Hellboy” by the excavation team. Brown says that the region where ‘Hellboy’ was found doesn’t have a reputation for being particularly rich when it comes to fossilized remains. Regions located farther east from the mountainous terrain are much more likely to yield fossils, but the museum paleontologist remarked that with the new regaliceratops find, research efforts will be expanded within the area, even with the possible difficulties that may be faced by research teams attempting to remove subsequent fossils. After careful examination of Hellboy’s skull, museum researchers say that the regaliceratops was likely to have weighed around 1.5 tons in life. Its massive frill was topped with jagged, tooth-like protrusions that resembled a spiked crown. The skull, once exhumed painstakingly from the cliff above the river, turned out to be nearly intact – only the beak and lower jaw were missing. Brown said that with less than one percent of dinosaur remains actually surviving the fossilization process, there could have been millions of regaliceratops roaming the world 70 million years in the past. Image courtesy of Wikimedia Commons user: Royal Tyrell Museum Drumheller, Alberta]]>