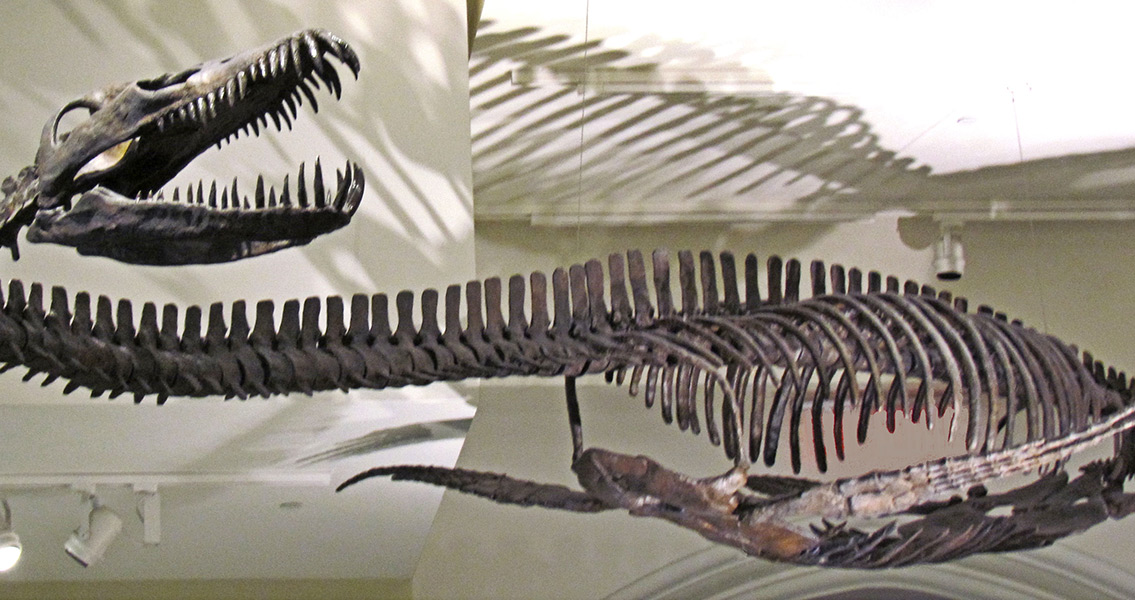 plesiosaur family known as an elasmosaur. According to the museum’s press release, Curvin Metzler, a fossil collector based out of Anchorage, made the find. The elasmosaur featured extremely long necks and long, paddle-like limbs that would have enabled them to swim freely underwater, according to the museum’s marine fossil expert and earth science curator Patrick Druckenmiller, who was quoted in the museum announcement as comparing the ancient dinosaur and the mythical Loch Ness monster that is rumored to live in the Scottish lake. Elasmosaurs roamed the waters of Alaska around 70 million years ago, but are not actually classified as dinosaurs because they never set foot on land. Theresa Bakker, a spokeswoman for the museum, said that there were highly specific criteria that needed to be satisfied before a creature could be considered a dinosaur, despite the fact that elasmosaurs lived during the Late Cretaceous when terrestrial giant reptiles were at the top of the food chain. The new find represents a historic moment in Alaskan paleontology, as it is the first time fossilized remains of an elsamosaur have been discovered within the state. Metzler discovered several of the creature’s fossilized vertebrae protruding from a bluff as the stone around it eroded, and he joined forces with Druckenmiller and an additional pair of experts to excavate the site in June this year. It was at that point that the fossil hunter was able to identify the skeleton as originating from an elasmosaur; a large percentage of the remains have since been recovered. Although the fossils were 30 feet up a 60-foot cliff, Druckenmiller wasn’t deterred from pursuing the find. A passionate plesiosaur fossil hunter, he has previously led several paleontology excavation teams across North America; one of his most recent finds was a nearly-complete elasmosaur unearthed in Montana in 2010. For now, the majority of the skeleton is being put on display at the Museum of the North, located in Fairbanks. Druckenmiller says there’s still a few remnants to recover from the site; according to his estimates, the elasmosaur would have been a minimum of 25 feet long in life. This new find isn’t the only example of a fossilized marine reptile being discovered within the state. Alaska has also been the home of two distinct finds, the first being a long, lizard-like reptile with a flattened tail known as a thalattosaur, which was uncovered on the shores of the Thongass National Forest southeast of Juneau; the other, an ichthyosaur, which resembles a modern dolphin, was discovered in the Brooks Range, located in the northernmost reaches of the state. Image courtesy of Wikimedia Commons user: D. Gordon E. Robertson]]>