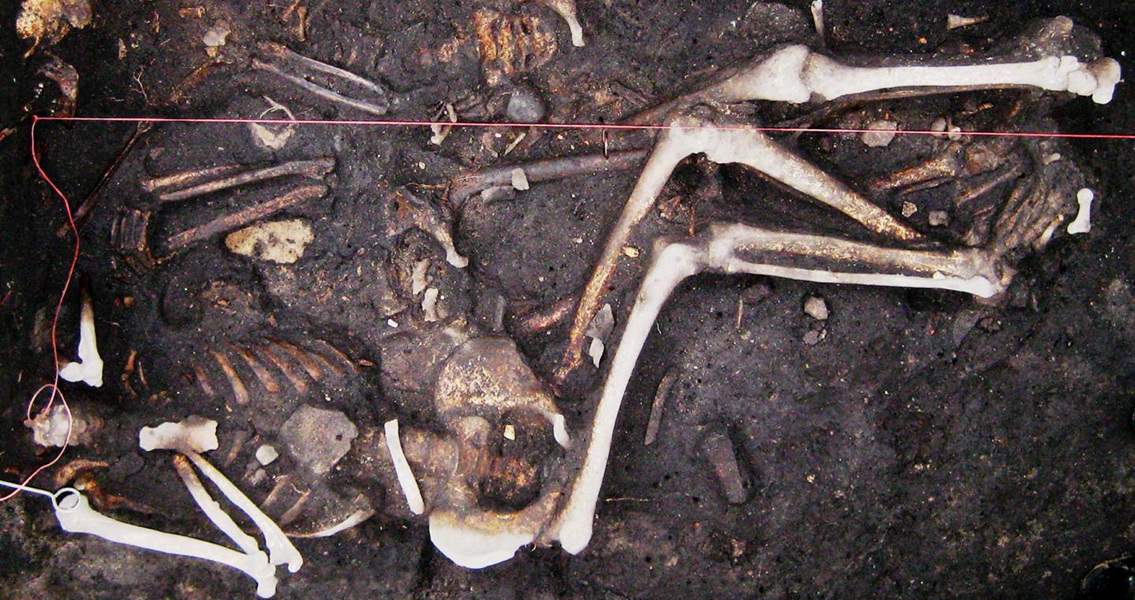 Y.pestis bacteria may have persisted in Europe from the fourteenth century to the seventeenth, a period which included the notorious ‘Black Death’, according to a new study. Published in the journal Plos One, the new research has the potential to broaden our understanding of the two devastating plague pandemics that struck Europe, suggesting that the long term persistence of the disease was facilitated by an as yet unknown reservoir. DNA from victims of the second plague pandemic were recovered and analysed by Lisa Seifert from Ludwig Maximilian University of Munich, Germany, and her colleagues. The 30 victims were excavated from two different burial sites in Germany, with the sample covering a three hundred year period. Eight of the thirty skeletons tested positive for Yersinia pestis-specific nucleic acid. From these eight, the team were able to carry out single nucleotide polymorphism (SNP) analysis on five individuals, to further study the Y.pestis bacteria. Four of these individuals were excavated from a grave in Bavaria and carbon dated to the fourteenth century, while the fifth was excavated from Brandenburg in a grave for casualties of the Thirty Years War which took place in the seventeenth century. “Despite a geographical distance of 500 km and in particular a time difference of 300 years, an identical Y. pestis genotype was detected in all five human individuals.” Seifert writes in the study, a conclusion which suggests a single genotype of Y.pestis bacteria existed in Europe for hundreds of years during the second plague epidemic. Fascinatingly, the SNP data from the five individuals in Seifert’s study were fully consistent with three plague victims from the East Smithfield Cemetery in London. “In conclusion, thus far only two different genotypes of Y.pestis have been detected among plague victims of the second pandemic in Europe of which one, described in the present study, covers a time period of 300 years.” Europe was ravaged by two plague pandemics in the Middle Ages, the ‘Plague of Justinian’ which struck the continent between the sixth and eighth centuries, and a second pandemic, (which Seifert’s study focuses on), that struck between the fourteenth and seventeenth centuries and peaked between 1346 and 1353 in a period often referred to as the Black Death. Both plagues took millions of lives, with almost a third of Europe’s population being wiped out during the Black Death. The etiologies of the two plagues have long been discussed among both historians and scientists. Until recently, many scientists believed the plague was in fact a viral disease, or that the two plagues had different origins. Only in 2013 was Y.pestis proven to have unequivocally played a role in both pandemics, when its 1500 year old genome was sequenced. Two main theories exist for how the two deadly pandemics lasted for several hundred years each. One argues that the plague was continuously reintroduced into Europe along major trade routes such as the Silk Road. Another hypothesis is that the plague persisted in Europe over a long period of time in a host that has yet to be identified, for example lice. Seifert et al’s results suggest a different hypothesis to explain the deadly pandemics. “In contrast to these hypotheses, the results of the present study clearly indicate that at least one genotype, which was introduced to Europe at the beginning of the Black Death from Asia, persisted in Europe from the 14th century until the Thirty Years’ War (1618–1648). We therefore suggest a model in which Y. pestis was introduced to Europe from Asia in several waves combined with a long-time persistence of the pathogen in not yet identified reservoirs.” For more information: www.journals.plos.org Image courtesy of Seifert et al ]]>