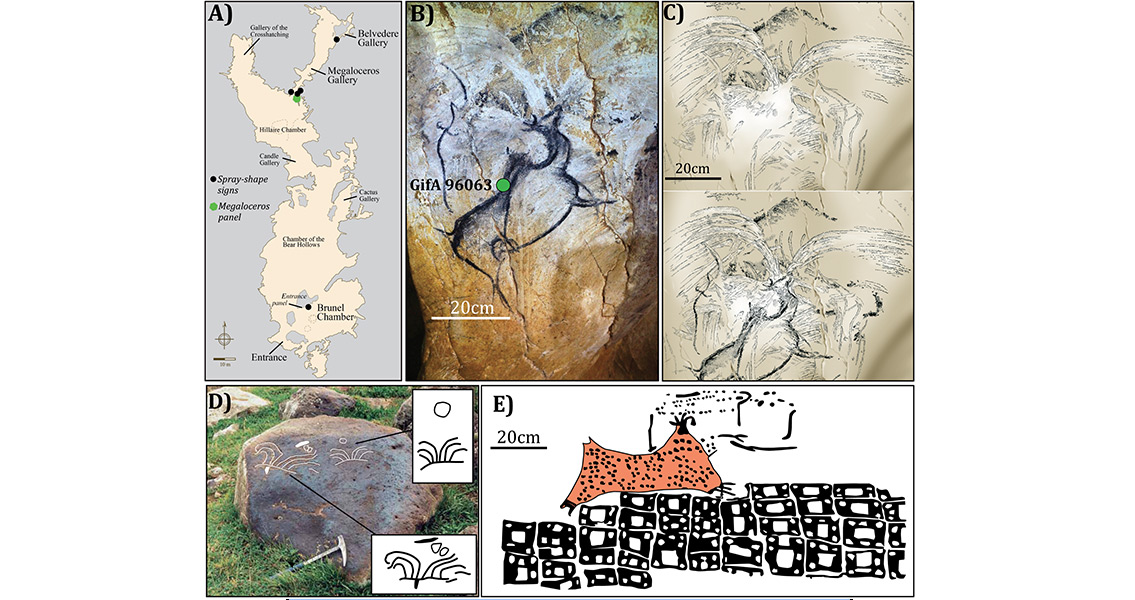 discovered in Northern Spain, but these images were dated to 13,000 years ago. In 2012 Nomade visited the Bas-Vivarais region with the aim of dating volcanic eruptions which would have coincided with the initial Homo sapien habitation of southern France. Through measuring the levels of certain isotopes of radioactive argon gas, he determined that the region had been struck by a series of spectacular eruptions between 19,000 and 43,000 years ago. Once it was clear that those living in the Chauvet-Pont d’Arc cave could have witnessed volcanic eruptions just a short distance away, Nomade and his team set about determining that the mysterious, as yet unidentified images in the cave were of volcanoes. The fact that the designs are unprecedented from the time period and region is a key part of the team’s reasoning: “The distinctive design of spray-shape signs specific to Chauvet-Pont d’Arc cave is reminiscent of typical lava fountains associated with strombolian eruptions. Such symbols have no close equivalent within the considered time period (i.e Aurignacian), or even among the more than 340 known ornate caves in France and Spain”, they write in the study. In addition, the iconography of the designs in France bares a resemblance to the petroglyohs depicting the Porak volcano in Armenia. The authors of the study point out that many of the images in the cave tend to be symbolic rather than naturalistic depictions of dangerous animals such as cave lions and bears. As mentioned above, there is no evidence of the inhabitants of the cave depicting scenery. However, the image of the volcano could be interpreted as reflecting a broader fascination with things seen as powerful or threatening. “We must add that as there is no other example in prehistoric rock art of natural scenery it is here perhaps the strength of the eruption image that might have inspired the Aurignacian artists”, the authors write in the study. For more information: www.plosone.org Image courtesy of Plos One ]]>