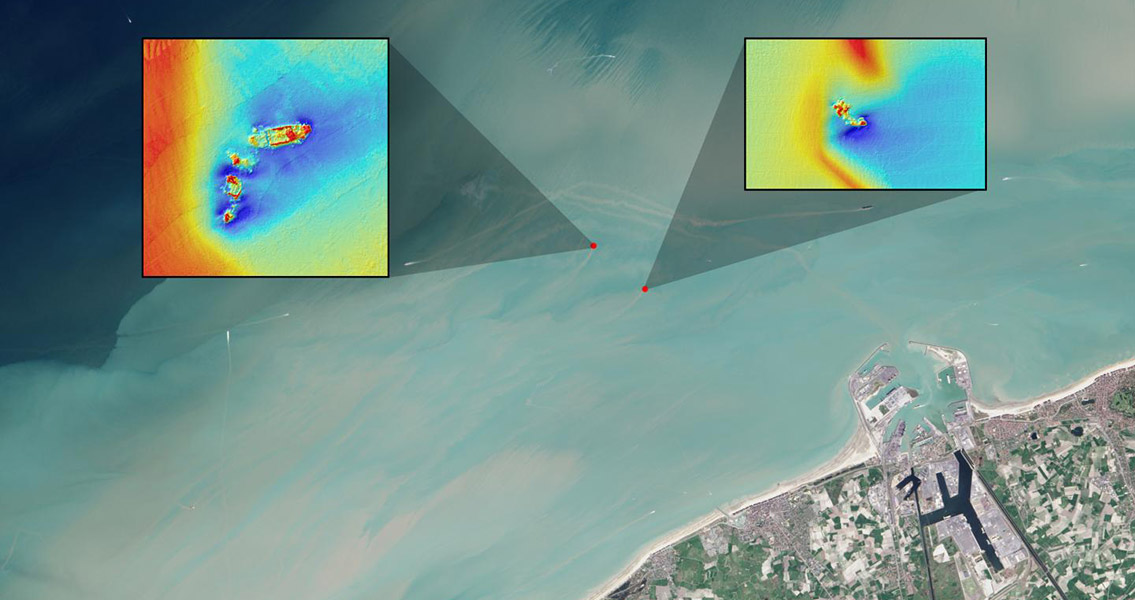 Journal of Archaeological Science. The team of researchers found that shipwrecks close to the coast can leave sediment plumes which are visible on the surface of the sea, revealing their location. Using free data from the Landsat 8 satellite, the team have detected plumes extending as far as 4 km downstream from the site of a shipwreck. It is the first study of its kind to show that Landsat 8 and similar satellites can be used to find shipwrecks in sediment heavy coastal waters. Around three million ships are scattered throughout the planet’s oceans, with the vast majority close to shore due to the abundance of navigational hazards in coastal areas. 25% of all the world’s shipwrecks are estimated to be in the North Atlantic. In particular, the narrow 100 mile stretch of the North Sea which separates England from the Netherlands and Belgium is saturated with Second World War wrecks, a consequence of mines, submarines and warships being deployed during the conflict to disrupt shipping between the Allies and Dutch and Belgian ports. So substantial is the potential environmental threat from these wrecks, the Council of Europe’s Parliamentary Assembly recommended they be mapped and monitored. This was the region that formed the focus of the researchers’ study. Taking the known locations of four shipwrecks from the Second World War: the SS Sansip, the SS Samvurn, the SS Nippon and the SS Neutron, as a starting point, the team mapped sediment plumes extending from the wrecks’ locations using Landsat 8 images and tidal models. They found that two of the wrecks which were mostly unburied created sediment plumes which could be measured during ebb and flow tides. The team suggest that the exposed parts of these ships create pits which fill with sediments during slack tides (when currents are reasonably still). During ebb and flow tides, the sediments are re-suspended in the water, creating the plumes which point to a shipwreck’s location. By mapping sediment plumes during different stages of the tides, the team postulate that it is possible to trace their origins and find as yet unearthed shipwrecks. As long as the waters in which a ship sank are shallow enough for the plumes to reach the surface, it is possible to detect them with optical satellites such as Landsat, according to the authors of the study. As coastal waters, where most shipwreck’s take place, are normally shallow and rich in sediment, the team’s findings could add a valuable new shipwreck detection method to the tool kit of marine archaeologists. Image courtesy of NASA/USGS Landsat image/Jesse Allen, NASA Earth Observatory]]>