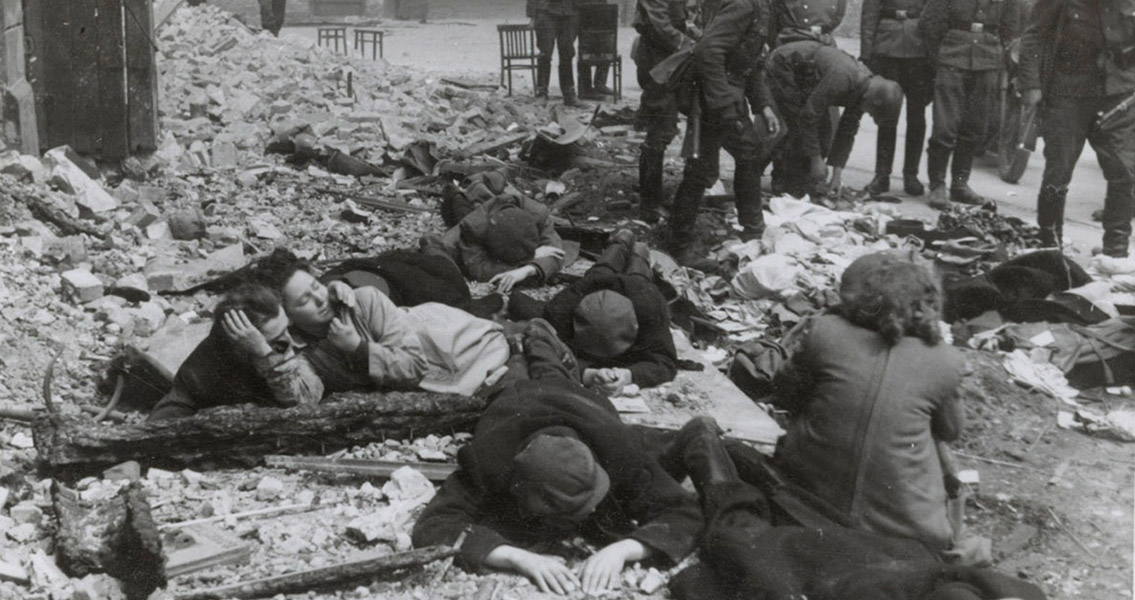 Zydowski Zwiazek Wojskowy, trans. The Jewish Military Union) and ZOB (Zydowska Organizacja Bojowa, trans. The Jewish Combat Organisation) to combat the Nazi soldiers. The two groups, the ZOB with around 500 members, the ZZW some 250, soon elected to work together to resist German attempts to destroy the ghetto. In October 1942, the ZOB managed to establish contact with the Home Army, an underground movement of the Polish military which resisted the Nazi occupation. They made a deal which saw the Home Army supply ZOB with weapons, mostly hand guns and explosives. Resistance had become the only option for those imprisoned in the Warsaw Ghetto. The chances of success were slim, but their fate under Nazi rule had been made increasingly obvious. Death seemed more and more inevitable, at least armed resistance offered some chance of survival. “Whomever you talk to, you hear the same cry: The resettlement never should have been permitted. We should have run into the street, set fire to everything in sight, have torn down the walls, and escaped to the Other Side. The Germans would have taken their revenge. It would have cost tens of thousands of lives, but not 300,000.” wrote Emmanuel Ringelblum in 1942, in his diary of life in the Warsaw Ghetto. “Now we are ashamed of ourselves, disgraced in our own eyes, and in the eyes of the world, where our docility has earned us nothing. This must not be repeated now. We must put up a resistance, defend ourselves against the enemy, man and child.” Shortly after the Nazi invasion of Poland, Warsaw’s Jewish citizens were forced into the barb wire fenced ghetto. More Jews from across Poland and Nazi occupied Eastern Europe were sent to the site, so that some 400,000 people ended up living in an area covering less than two square miles. Forced to live on inadequate rations, disease and starvation soon started to kill thousands each month. From July 1942, Jews from the Warsaw Ghetto started to be rounded up and taken to the Treblinka concentration camp at a rate of roughly 6,000 a day. The Nazi authorities initially claimed Treblinka was a labour camp, but news soon got to the ghetto that being transferred meant almost certain death. The first act of resistance came on 18th January, 1943, when ZOB fighters ambushed the Nazi forces sent in to round up some of the ghetto’s population for transfer. Fighting lasted for a few days, and several Nazi soldiers were killed before they could withdraw. Two months later, Heinrich Himmler announced that the ghetto was to be emptied of its population on 19th April, to celebrate Hitler’s birthday. When SS soldiers entered the ghetto on the 19th they were faced with 1000 ZOB fighters armed with homemade bombs and guns. Frantic fighting ravaged the streets while the non-combatant residents hid themselves in secret underground bunkers. The SS soldiers soon withdrew, but the respite was short lived. On the 24th April an all out military assault was launched on the ghetto. For a month relentless fighting wrecked the ghetto, as the ZOB waged guerrilla warfare against the Nazi troops in an attempt to fend off transportation to Treblinka. As the battle continued, Nazi soldiers set about systematically destroying the ghetto block by block, obliterating the bunkers where Jewish residents had been hiding. ZOB soldiers continued their fight from the sewers, but on 8th May their cause was all but lost with the destruction of their command centre, and the group’s leaders committed suicide to evade capture. By 16th May the Warsaw Ghetto was under Nazi control, and transportation to Treblinka resumed en masse. Some 300 German soldiers were killed in the uprising, while thousands of Jews lost their lives in the fighting. Any Jewish survivors were sent to Treblinka, where most perished before the end of the war. The heroic last stand by the ZOB may have ended in tragic defeat, but it was remarkable in terms of the amount of Nazi forces it diverted, especially considering the resistance fighters’ limited resources. Although it failed to save the people of the Warsaw Ghetto, it had aided the Allied war effort with the Nazi troops it occupied.]]>