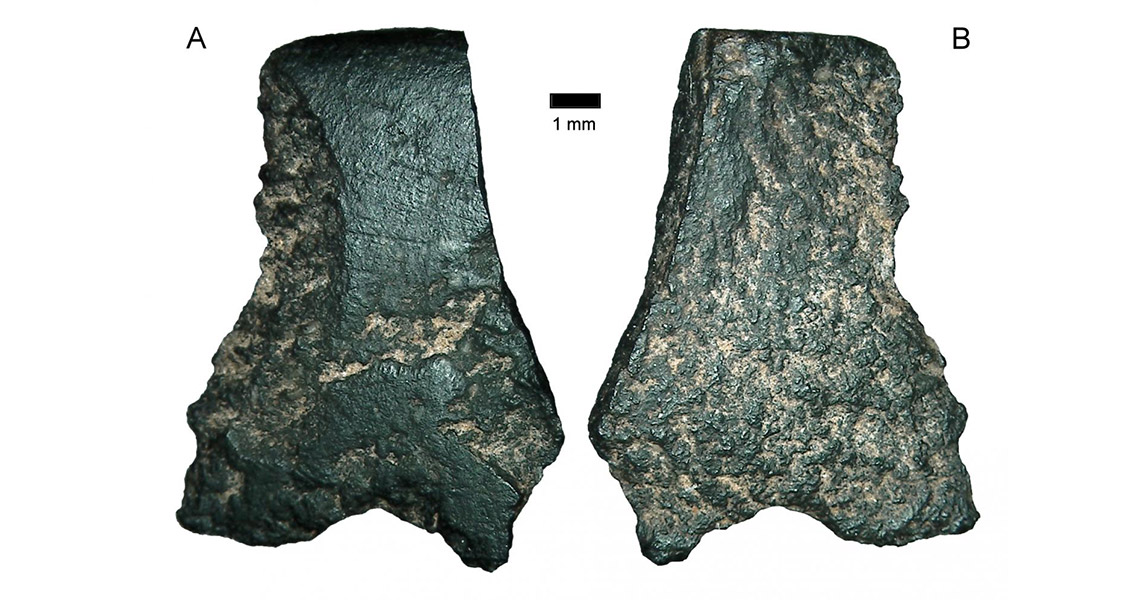 Posted By: Daryl.Worthingtonon: May 11, 2016In: Breaking NewsNo Comments
Print Email

Australian Archaeology. Dating of the piece of polished axe suggests it was created shortly after the first humans arrived in Australia. No bigger than a thumbnail, the Stone Age axe fragment was found in the remote Kimberley region of Western Australia. Dated to between 45,000 and 49,000 years ago, the axe is at least ten millenia older than previous discoveries of ground-edge axes. “This is the earliest evidence of hafted axes in the world. Nowhere else in the world do you get axes at this date,” said Professor Sue O’Connor, an archaeologist from the Australian National University who worked on the project. Hafted axes are those axes which have a handle attached. “In Japan such axes appear about 35,000 years ago. But in most countries in the world they arrive with agriculture after 10,000 years ago.” O’Connor explained, in a ANU press release. The remarkable discovery points to the innovation of Australia’s earliest human inhabitants, showing they were capable of a greater technological sophistication than is often believed. Professor Peter Hiscock from the University of Sydney was responsible for analysing the fragments unearthed in Western Australia. “Since there are no known axes in Southeast Asia during the Ice Age, this discovery shows us that when humans arrived in Australia they began to experiment with new technologies, inventing ways to exploit the resources they encountered in the new Australian landscape,” Hiscock explained, in a press release from the University of Sydney. Analyses of the fragment have revealed it came from a hafted axe made from basalt; the fine grained rock shaped and polished by grinding it against a softer rock such as sandstone. The axe could have been useful for any number of tasks, from chopping down trees to stripping the bark off wood, even as a tool for shaping wood into spears. The fragment was initially excavated by O’Connor in the 1990s, among a host of other artefacts from Carpenter’s Gap, a large rock shelter known to be one of the first sites occupied by modern humans. In 2014, further study was carried out on the objects, including food scraps, tools and artwork, that had been extracted two decades earlier. It was then that Hiscock noticed the fragment of polished axe. Surprisingly, it seems that the axes developed in the region surrounding Carpenter’s Gap did not migrate with humans through the rest of Australia. “Axes were only made in the tropical north. These differences between northern Australia, where axes were always used, and southern Australia, where they were not, originated around the time of colonisation and persisted until the last few thousand years when axes began to be made in most southern parts of mainland Australia,” Prof. Hiscock explained. The dating of the axe fragment has shed fascinating new light on the development of Stone Age hunter-gatherer societies, and the chronology and geography of the development of certain tools. “Polished stone axes were crucial tools in hunter-gatherer societies and were once the defining characteristic of the Neolithic phase of human life. But when were axes invented? This question has been pursued for decades, since archaeologists discovered that in Australia axes were older than in many other places. Now we have a discovery that appears to answer the question,” said Hiscock. Image courtesy of ANU ]]>