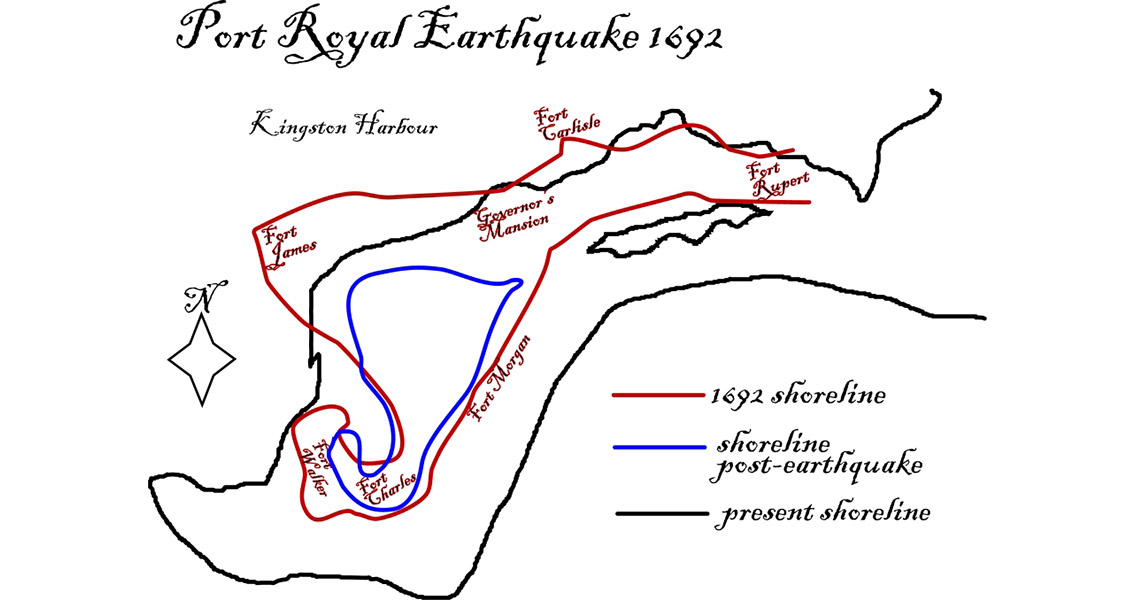 HMS Swan, out of the sea, and deposited it on a building in the city. The geology of Port Royal only added to the scale of the damage wrought by the earthquake. Much of the town had been built on tightly packed soil rather than bedrock. During the quake, this soil was shaken loose and almost turned completely liquid. Buildings sank into the ground, and many of those that had survived the initial earthquake and subsequent tsunami were nonetheless rendered uninhabitable, including two forts. One particularly morbid consequence of this loose soil saw corpses from the city’s cemetery dislodged from their graves and floating in the harbour. By the end of the event, two thirds of the city had been annihilated. Thousands of people had been killed, while aftershocks rocked the island for days after. A lively, bustling city and centre of trade in the Caribbean, Port Royal also had the dubious accolade of being referred to as the “the most wicked and sinful city in the world.” During the seventeenth century, it was considered a dangerous place, home to pirates, smugglers and debauchery. It was said at the time that a quarter of the buildings in the city were either a brothel or a bar. Located away from the Jamaican mainland, it became the perfect hiding place for the real life Pirates of the Caribbean, allowing them to prey on shipping before escaping into the bustle of the busy city. Remarkably however, the city also served as a base for the British Royal Navy in the seventeenth century. For the clergy of the seventeenth century, the shocking disaster which befell Port Royal was seen as divine retribution for the city’s vices, a biblical punishment for a city considered sinful on a biblical scale. Some historians however, suggest that the size of the cataclysm that befell Port Royal actually distorted the history of the city. The sins of the island were exaggerated after 1692, to match the narrative of the earthquake being a punishment from God. Port Royal was never again settled to the same extent it had been before the 1692 earthquake, the damage caused deterred people from returning, meaning it is now the site of a just a small fishing village. ]]>