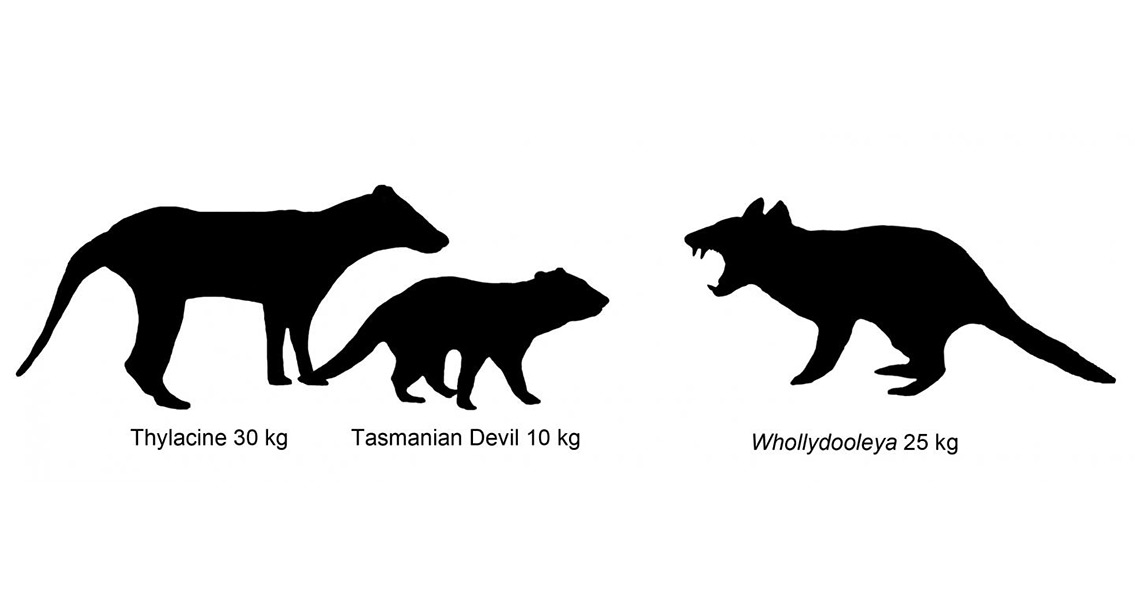 Whollydooleya tomnpatrichorum. It is believed W.tomnpatrichorum would have weighed between 20 and 25 kilograms in life. By comparison, a modern adult Tasmanian Devil weighs around just 10 kilograms. The creature marks the first formally identified discovery from New Riversleigh, a recently unearthed site in a remote part of Queensland littered with the remains of a plethora of strange, previously unidentified creatures. A description of W.tomnpatrichorum has just been published in Memoirs of Museum Victoria. W.tomnpatrichorum‘s distinct teeth are the focus of the new paper. One of the animal’s molars was excavated from an area of New Riversleigh known as Whollydooley Hill, named after Genevieve Dooley, one of the volunteers excavating the area. The tooth was found by Dooley’s partner, Phil Creaser. University of New South Wales Professor Mike Archer, the lead author of the new study, provided an insight into the just how the animal used its ferocious looking teeth. “W. tomnpatrichorum had very powerful teeth capable of killing and slicing up the largest animals of its day,” The late Miocene period in Australia, during which the newly discovered creature lived, is one of the least well understood in Australia’s history. Stretching from twelve million to five million years ago, it was characterised by drastic climate change as the continent began to dry out and megafauna there were forced to evolve and change in response. Due to the aridity of the period, precious few land animal fossils remain. That scarcity of fossils makes New Riversleigh so valuable to scientists. The site was discovered in 2012 by remote sensing using satellite data, close to the already famous fossil site of Riversleigh. “New Riversleigh is producing the remains of a bevy of strange new small to medium-sized creatures, with Whollydooleya tomnpatrichorum, the first one to be described,” explained Professor Archer. “These new discoveries are starting to fill in a large hole in our understanding about how Australia’s land animals transformed from being small denizens of its ancient wet forests to huge survivors on the second most arid continent on Earth.” Although the remains of a host of medium to large sized late Miocene animals have previously been found in fossil deposits in Australia’s Northern Territory, much less is known about the small to medium sized creatures that lived in that time “which generally provide more clues about the nature of prehistoric environments and climates”, Professor Susan Hand from UNSW, a team member on the project, explained. Dr Karen Black, post-doctoral researcher in paleontology at UNSW, added: “The small to medium-size mammals from the New Riversleigh deposits will reveal a great deal about how Australia’s inland environments and animals changed between 12 and 5 million years ago – a critical time when increasing dryness ultimately led to the Ice Ages of the Pleistocene.” According to Professor Archer, the W.tomnpatrichorum specimen discovered at New Riversleigh could have been one of the last of its species. “While it was at least distantly related to living and recently living carnivorous marsupials such as Devils, Thylacines and Quolls, it appears to have represented a distinctive subgroup of hypercarnivores that did not survive into the modern world.” “Climate change can be a merciless eliminator of the mightiest of mammals,” Archer remarked. For more information www.museumvictoria.com Illustration: Karen Black/UNSW ]]>