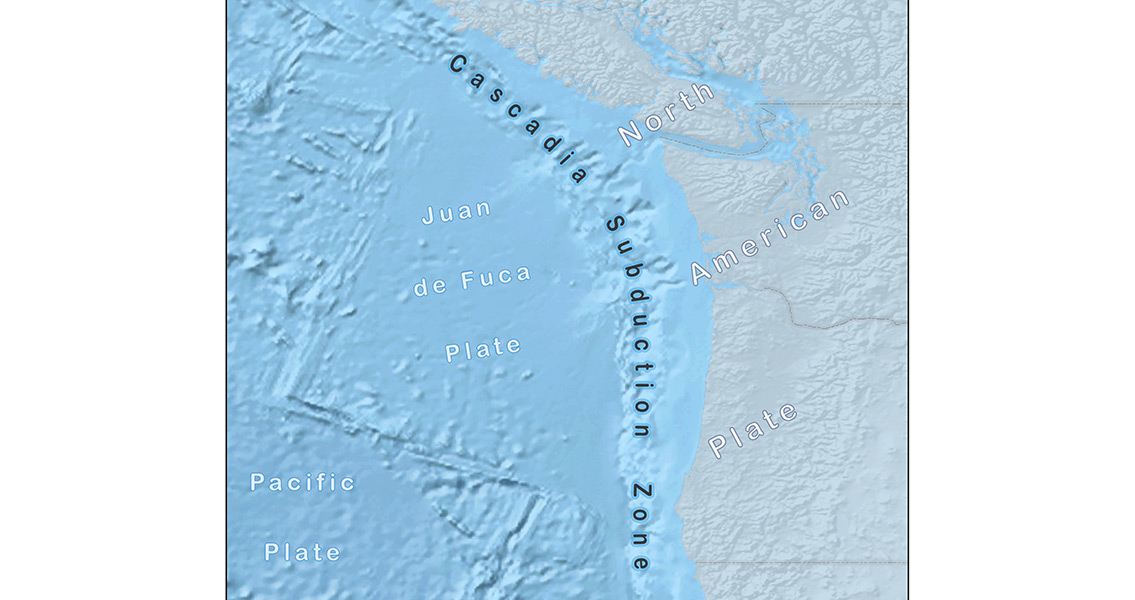 Marine Geology. The analysis was carried out with researchers from OSU, Camosun College in British Columbia and Instituto Andaluz de Ciencias de la Tierra in Spain. Running from northern California to British Columbia, the Cascadia Subduction Zone separates the Explorer, Gorda and Juan de Fuca plates from the North American one. In the past 10,000 years there have been 43 major earthquakes on the subduction zone, some affecting the whole zone at once, others only parts of it. The occasions when the whole zone is involved are believed to be capable of generating earthquakes of 9.1 magnitude. It is widely believed that the southern portions of the Cascadia Subduction Zone, south of Newport, Oregon, tend to rupture more frequently. From Newport to Coos Bay ruptures occur every 300 – 380 years, and every 220 – 240 years from Coos Bay to Eureka, California. Although the latest study doesn’t deny that the ruptures in the subduction zone occur more often in the southern section, it has found they’ve occurred more frequently than traditionally thought in the north. The data used in the study is the most comprehensive ever collected. 195 core samples containing submarine landslide deposits caused by subduction zone earthquakes were analysed by the team. Previous research was restricted to only a dozen such core samples. The findings could have significant implications for the major cities in the northern sections of the subduction zone, such as Vancouver, Seattle and Portland. A section of the zone stretching from Newport to Astoria, Oregon, was believed to rupture only once every 400 – 500 years. The new study suggests that in reality that average is every 350 years. Further north, a section from Astoria to Vancouver island has been found to rupture every 430 years, much more often than the previously believed average of every 500 – 530 years. “What this work shows is that, contrary to some previous estimates, the two middle sections of the Cascadia Subduction Zone that affect most of Oregon have a frequency that’s more similar than different,” said Goldfinger. Based on the results, the possibility of earthquakes in the next fifty years have been revised upwards. On the part of the zone off central and northern Oregon, the chances of an event in the next half a century have been changed from 14-17% to 15-20%. In the northern most section, off Washington and British Columbia, the chances have been increased from 8 – 14% to 10-17%. The results also suggest that the biggest earthquakes: caused by the entire Cascadia Subduction Zone rupturing at once, occur more frequently than previous research suggested. The new data suggests that of all the ruptures in the Cascadia Subduction Zone over half affect the whole zone, previously that was thought to be the case only 50% of the time. It was in January 1700 that the last major earthquake occurred on the Cascadia Subduction Zone. The event is well documented, as it triggered a massive tsunami which crossed the Pacific Ocean and struck Japan. The new findings have allowed scientists to use the past to gain a greater understanding of what lies ahead. “Part of what’s important is that these findings give us more confidence about what’s coming in our future,” said Goldfinger. For more information: www.sciencedirect.com ]]>