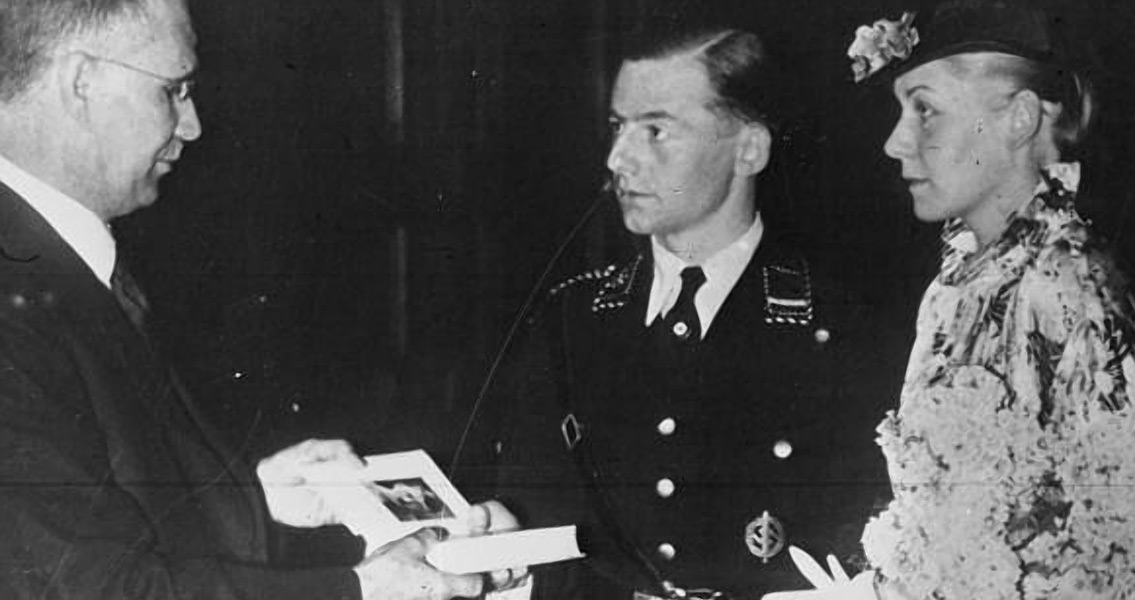 Mein Kampf, other books and historical materials describing the town of Falkenburg, as it was known then. Ordensburg Krössinsee was one of three educational centers constructed in the 1930s in Germany for the purpose of training future leaders of the Nazi Party. It was built near the town of Falkenburg in what was Germany at the time. Today it’s the town of Zlocieniec, Poland, and the former training camp is used by the Polish army The individual buildings and designated areas which made up the facility included a Hall of Honor, twenty separate living quarters, a dining hall, an educational hall, the commander’s house, administrative buildings, a house for female employees, a sick bay, a sports field, an arena for riding, horse barns and two towers (although four had been planned). A hotel, swimming pool and water sports facility were also planned but never constructed. To attend the educational center, cadets, called Ordens Junkers, had to be a minimum 5 feet 4 inches (1.63 m) tall and be between 23 and 26 years old. They were required to be racially pure, in good health and have no physical limitations. Classes included the study of politics, world history and philosophy, while afternoons were spent on battle tactics, military drills, equestrian techniques (a program for which it was recognized), and sports. In 1937, the facility was shared with the Hitlerjungen or Hitler Youth. Between 1933 and 1945, the Hitler Youth was Germany’s only official youth organization and consisted of the Hitlerjugend for males between the ages of fourteen and eighteen and the Deutsches Jungvolk for younger boys between ten and fourteen years old, as well as the League of German Girls. The Hitler Youth members would become the sole occupants of the camp following the invasion of Poland in 1939 and the start of World War II. The capsule and its contents have been transferred to the National Museum in Szczecin for translation, categorizing, preservation and display. ]]>