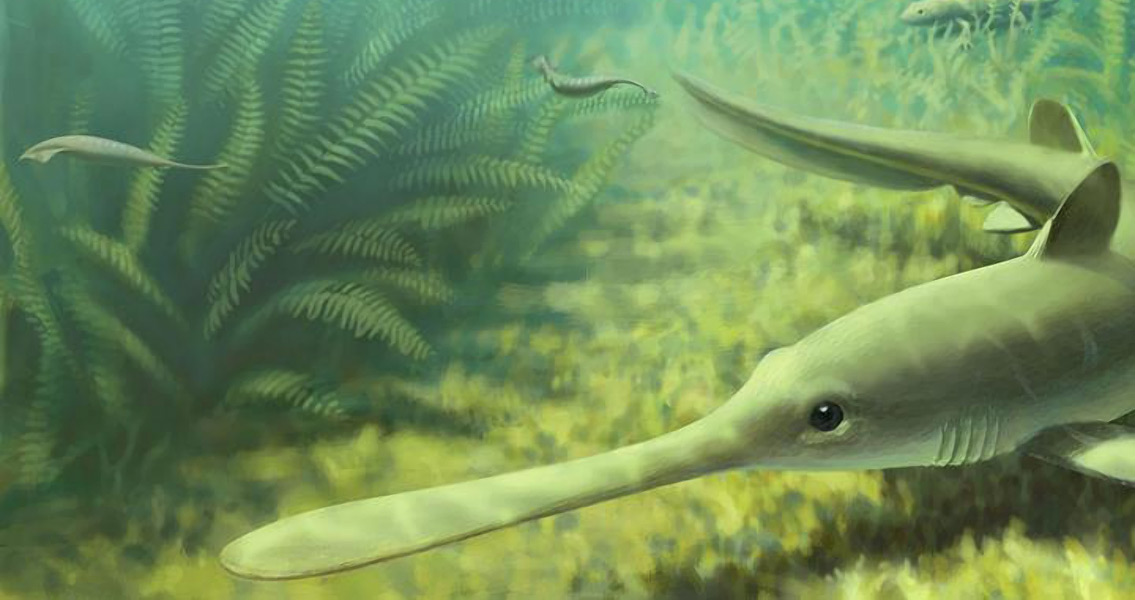 Tullimonstrum gregarium, aka the Tully Monster, a bizarre 300 million year old creature whose remains have been found exclusively in the state of Illinois, has long been a source of mystery to scientists. Made from a strange looking mixture of body parts – a long eel like body, tail fins resembling a squid’s back end and a long tentacle like neck culminating in a crab claw like mouth – Tully Monster has been almost impossible for scientists to categorise. Last year, two studies claimed to have finally brought the mystery of the Tully Monster to a close. The first claimed to have found evidence of a primitive backbone among Tully Monster fossils. It was a discovery which led the authors to conclude the creature had been a fish similar to a modern lamprey. Headed by PhD student Thomas Clements from the University of Leicester, UK, the second study also claimed to have convincing proof the creature was a vertebrate. The conclusion was based on evidence proving that two long stalks coming from the creature’s body were eyes. Clements’ team argued that such eye stalks are only known to exist in creatures with backbones. Now, a team of paleobiologists led by Lauren Sallan claim both studies are wrong. “This animal doesn’t fit easy classification because it’s so weird,” said Sallan, an assistant professor in the University of Pennsylvania’s Department of Earth and Environmental Science. “It has these eyes that are on stalks and it has this pincer at the end of a long proboscis and there’s even disagreement about which way is up. But the last thing that the Tully monster could be is a fish.” Published in the journal Paleontology, Sallan and colleagues’ report argues there is little convincing evidence Tully Monster was even a vertebrate. “It’s important to incorporate all lines of evidence when considering enigmatic fossils: anatomical, preservational and comparative,” said Sam Giles, a junior research fellow at the University of Oxford and a coauthor of the study. “Applying that standard to the Tully monster argues strongly against a vertebrate identity.” The team’s biggest criticism is the fact that none of the 1000 Tully Monster remains studied so far show signs of the structures believed to be universal in aquatic vertebrates. “You would expect at least a handful of the specimens to have preserved these structures,” Sallan said. “Not only does this creature have things that should not be preserved in vertebrates, it doesn’t have things that absolutely should be preserved.” As Sallan’s team point out, accurately classifying such an unusual creature is vital for the broader understanding of evolution. “Having this kind of misassignment really affects our understanding of vertebrate evolution and vertebrate diversity at this given time,” Sallan explained. “It makes it harder to get at how things are changing in response to an ecosystem if you have this outlier. And though of course there are outliers in the fossil record — there are plenty of weird things and that’s great–if you’re going to make extraordinary claims, you need extraordinary evidence.” Since its discovery in the 1950s Tully Monster has been through a host of different classifications. It seems the mystery surrounding its identity is far from solved. “Initially it was published as a worm,” Sallan said. “There is a well-constructed argument that it is some kind of mollusc, like a sea cucumber. And there’s another very strong argument that it’s some kind of arthropod, similar to a lobster.” Featured Image: An illustration depicts what Mazon Creek may have looked like 300 million years ago, complete with Tully monsters (the two small swimming creatures), a large shark and a salamander relative. Courtesy of John Megahan ]]>