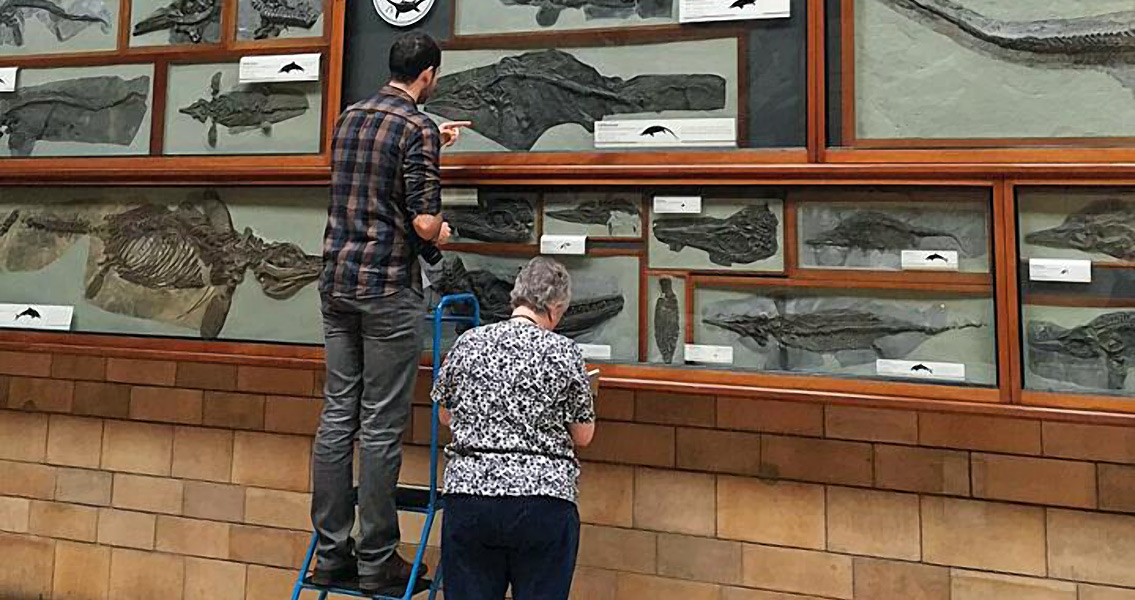 Journal of Systematic Palaeontology, published by Taylor & Francis. In the early nineteenth century the fossils of massive, mysterious sea creatures started to be unearthed around the coast of the United Kingdom. By 1821, scientists realised they had discovered a new, extinct group of sea dwelling reptiles and described the first ichthyosaur species: Ichthyosaurus communis. First appearing in the Triassic period, ichthyosaurs lived through the Jurassic and Cretaceous, ultimately dying out some 25 million years before the mass extinction event which wiped out the dinosaurs. Physically, ichthyosaurs were shaped like modern dolphins or sharks, yet the creatures were reptiles – evolved from an as yet unidentified land creature. Following the initial description of Ichthyosaurus communis in 1821, three more ichthyosaur species were quickly described – supposedly distinguished by the shape and structure of their teeth. Two of these species have since been designated as belonging to other types of ichthyosaur. The other, Ichthyosaurus intermedius, continued to be regarded as a relative of I.communis. For years confusion reigned as eminent scientists studied Ichthyosaur fossils unearthed on the coasts of Yorkshire, Dorset and Somerset. Ambiguity over the differences between I.communis and I.intermedius meant many fossils were identified on a possibly shaky basis. Lomax explained in a press release from the Taylor and Francis Group: “The early accounts of ichthyosaurs were based on very scrappy, often isolated, remains. This resulted in a very poor understanding of the differences between species and thus how to identify them. To complicate matters further, the original specimen of Ichthyosaurus communis is lost and was never illustrated. Similarly, the original specimen of I. intermedius is also lost, but an illustration does exist. This has caused a big headache for palaeontologists trying to understand the differences between the species”. Paleontologist Dr Chris McGowan was the first to suggest I. communis and I. intermedius could be the same species, in the 1970s. Since then, various studies have argued back and forth over whether the species should or should not be separated. Lomax and Massare’s study is the most comprehensive ever published comparing the species of ichthyosaur. The authors conclude that the two species are the same, and that characteristics of Ichthyosaurus intermedius can be found in other ichthyosaur species, including I. communis. The two authors have made countless other vital contributions to the study of ichthyosaurs over the years, including describing three new species and reassessing historical species. Their work is providing groundbreaking new insights into the spectacular reptiles that once dominated the earth’s seas. To read the full article please visit: http://www.tandfonline.com/doi/full/10.1080/14772019.2017.1291116 Image courtesy of London Natural History Museum]]>